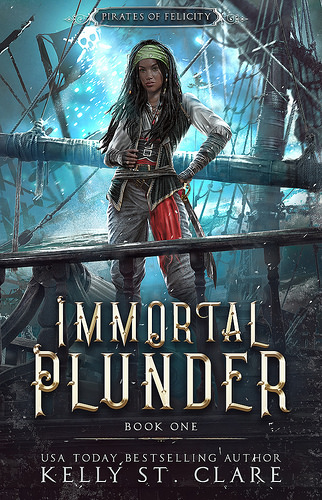 Blurb:
There are three types of people in the Exosian Realm—males, females, and pirates.

I’m a pirate. One with six overprotective fathers for a crew. And if I’m telling the honest truth, not just the pirate truth, having so many fathers is working pretty well for me so far.

When I’m caught eavesdropping on the pirates of Malice, they retaliate with violence, and my fathers become set on revenge. But simple payback cascades into shattering misfortune.

Unexplainable magical happenings and impossible creatures propel me toward a fate much darker than stealing plunder. A terrible beast drags forth horrible truths of my fathers’ pasts which call my entire life into question. Now, my sheltered upbringing is swelling into a furious storm that I must, for the first time in seventeen years, navigate without my crew.

An intense russet-haired landlubber seeks to help me. A savvy silver-eyed Malice pirate strives to hinder me. But the further I drift, the more I wonder—am I helping or hindering myself?

Can I stand on my own two feet to claim victory?

And if so. . .what will that victory cost?

Prepare to sail into a realm of gritty high-stakes adventure, swashbuckling characters, forgotten magic, and slow-burn romance. A story full of heart, with a large twist of humor, scroll up and one-click to discover this exciting new tale by USA Today Bestselling author, Kelly St Clare, today!

As soon as I heard about this series I was excited to read it. It just sounded so good and that cover only made me more excited for this book, because it’s so pretty and it fits the story well too. While I haven’t read many books with pirates and don’t have much to compare it with, this is exactly what a pirate book should be like in my opinion. It has pirates, action, adventure, treasure, lots of sea, life on a ship and magic.

While the start felt a little bit slow, I quickly got sucked into this story. The set-up is an important part of the story and the story is very solidly build, with hints for later reveals and plot points being planted earlier in the book already. Mostly this book reads like an exciting pirate adventure, with great characters and some fun reveals and twists. There was a twist I was thinking in the right direction for, but hadn’t fully guessed what it build be. I also liked how most of the book took place on an around the sea, which fit the pirate theme of the book.

Ebba-Viva was a great main character. She was stubborn, spoiled by her six fathers, a bit naive and could put her head in the sand and avoid topics and questions she didn’t want to answer, but overall I still liked her. She was also curious, caring, determined and hungry for adventure. She also felt guilty when her actions bring her fathers in danger and also realizes there are more secrets than she was aware of, even if she isn’t willing to uncover them yet. I felt her flaws made her into a more realistic character and I liked reading about her.

Then there are Ebba-Viva’s six fathers. At first I really struggled to remember who was who as there are six of them and some of their names are similar. But Kelly St Clare has done a great job of giving all of her fathers their own personality and while I still struggled with Stubby and Grubby sometimes because of their similar names for the most part I could keep them apart and got a pretty good feel for their personalities. And the ship Felicity is almost a character herself as so much of the story takes place aboard the ship.

There is only a little bit of hint at a possible romance, but only a hint as I think that Ebba-Viva isn’t ready for a romance yet, so a hint is all it stays at in this book. But definitely the possibility of that growing into something more later in the series. There are two possible love interests and while they both seemed like interesting characters, so far I liked Cosmo the best, but that might be because we get to know him the best.

It also was nicely done how the characters are semi honest pirates, they’re mostly traders, but steal some things too. And while at first they don’t do as much pirate-y things, but they still give off that pirate vibe. And once they start on their quest, you really get that pirate feel, but they’re still decent characters too. It was nice how the author manages to strike a good balance with that. It had a pirate feel, while the crew we follow are still mostly good characters, who don’t do a lot of bad stuff.

Another thing I liked about this book is how it gives the feeling that there is so much more below the surface. Not sure if that makes sense, but there are a few things that happened, that only make it clear how little you know about the world and the characters yet. And while there are some things we figure out and get to know in this book, there’s this feeling that there will be even more we don’t know yet. And I can’t wait to uncover that in future books.

The world building was done really well. There are hints of different types of mythologies and mythological creatures that the author took inspiration from and that make an appearance. The world feel pretty unique world and well developed too. There’s even a world map at the beginning of the book which helped get a feel for how the world looked like. I really liked how the world slowly unfolded before the reader’s eyes with things that got revealed along the way. And while there is a lot we see in this book, it feels like there is even more yet to come! And I can’t wait for more adventures with Ebba-Viva and her six fathers.

To summarize: I had a great time with this book and enjoyed spending time aboard Felicity with Ebba-Viva and her six fathers. There is a lot of adventure, a quest for treasure they have to find, magic and more. It took me a few chapters to fully get into the story, but by then I was fully hooked. I liked Ebba-Viva, even with all her flaws as I think she made for a great main character who felt realistic as she had her strengths and weaknesses. I also liked her six fathers, although it took me some time to remember who was who, Kelly St Clare did a great job giving them all an unique personality. There’s a hint of a possible romance with potential for that to grow into more in later books. I really liked how there are pieces of information and reveals that are uncovered in this book, but also the promise of even more to come. The world building was done well, with pieces from mythology and what I think is the author’s own additions and twists upon them. All in all this was a great read and I can’t wait to return to to sail on Felicity again in book 2! I would recommend this to everyone who enjoys a good fantasy or pirate book!

Do you like reading about pirates? Tell me about one of your favorite books with pirates!