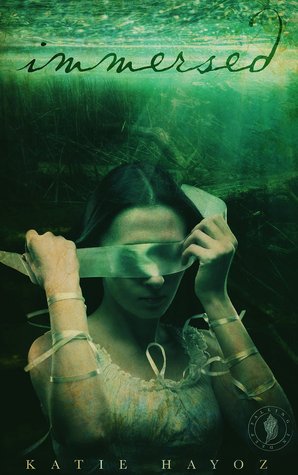 Blurb:
What if love turned you into a monster?

Forget petticoats and demure female behavior. Melusine Doré prefers armored corsets and knives and slays evil creatures for a living. The grim and gruesome don’t frighten her; she’ll take on a cyclops or a dragon and not even break a sweat. But when her rival, the charismatic Levi Cannon, comes to town, all her buried fears begin to surface. Melusine realizes she is in danger of something much more horrifying than facing blood-thirsty beasts – she’s in danger of falling in love. Because love alone has the power to reveal a secret terrible enough to completely shatter her world.

Set in the muddy streets of 1850s steampunk Chicago, Immersed by Katie Hayoz is a dark yet romantic fantastical romp. It is a stand-alone novella, but the first in a series of adventures that follow Melusine on her quest to rid the world of monsters…and her struggle to come to terms with every monstrous facet of herself.

I had seen two very positive reviews for this book on blogs of bookbloggers that I frequently visit so when I saw this one netgalley I didn’t hesitate for a second and hit request. I really enjoyed this book and was amazed by the seamless blend of multiple genres, this book has steampunk, paranormal, romance and historical aspects and it all worked together to create an interesting world and story. I really enjoyed this book and wanted to keep reading. There’s a bit of a mystery surrounding Melusine her past as well, which was well done with a few flashbacks to reveal more.

Melusine is an interesting main character, she doesn’t want to fall in love, because of something that happened in the past. While the story furthers we also learn more and more about her past and I could see how it shaped her into the person she is today. She was a great character, with her monster fighting skills, but also having a dark past. Levi was a nice character, although it took me awhile to warm up to him as I found him a bit annoying at first. The side characters are less developed, but there’s still enough characteristics about them to give the reader a feel of who they are.

There is some romance going on, although it isn’t the focus. it nicely blends in within the plot and I almost felt like it was as much part of the plot as everything else. It was very well done, although at times I which there was a bit more depth and connection between them. I do felt like they were a good couple, but as it is a short story there is less time for them to get to know each other, so things develop rather quickly. I did like how things ended with their romance and the later half of the book I enjoyed their relationship more than in the first half when they are still trying to hide their feelings, although it all makes sense why they acted that way later on in the story.

The world building was done very well, although it wasn’t the focus. We learn how there are monsters and those who hunt them. Melusine makes the distinction to only kill monsters who harm others, although Levi seems more easy with what he’ll kill. So there was some hint that not all monsters were as evil or harmful. There’s a big diversity in monsters and it seems like almost all monster are possible, we see more common monsters like sirens and Cyclops, but also weirder ones like the siren eel and some sort of mud snake creature. I thought it was well done, although the author leaves a lot open as well.

Another part I loved was the historical setting, it’s set in 1850 in Chicago and there were mentions of raising the city form the mud. I had to check out the links in the front of the book before I believed it was real, it sounded so surreal how they raise the whole city and I loved learning this little tidbit about the city’s history. There are frequent mentions of mud and one where a house is being moved with the people having breakfast inside and it just added a great atmosphere to this book. I could vividly imagine how the city looked like and combined with all the steampunk elements it really was a joy to read about.

To summarize: This book nicely blends different genres in one story. This book has paranormal, romance, steampunk and historical elements and it all fits together nicely. I was really impressed by the blend of genres and how it created an interesting world. I liked the characters and enjoyed learning more about Melusine her past. The romance was well done, although I would’ve enjoyed to see more about the two of them and how they felt in love as it felt like things happened rather quickly even though they have a past together. The world building was well done, although it also leaves some thing open. I really liked the setting in Chicago and almost didn’t believe it was real with how they raised the city form the mud. It was very interesting and I enjoyed learning this tidbit of history.

What’s the most original historical setting you read about?