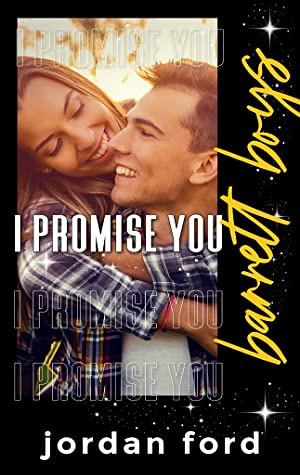 I Promise You (Barrett Boys #6)
by Jordan Ford

Blurb:
Jackson promised to take his best friend to prom, no matter what. But four years down the track and things between them have shifted. Can childhood besties become something more, or will it ruin everything?

Jackson:
Lesson #1: When you’re twelve and you make a deal with your best friend that you’ll go to prom together, don’t do anything to screw that up, even if she does try to seal the deal with a kiss.

Lesson #2: When things get awkward between the two of you, work your way through it and don’t drift apart.

Lesson #3: When she starts dating some guy you don’t like, don’t be shy about telling her the truth.

Lesson #4: When her idiot boyfriend crosses a line, be the first to step up and protect her, because let’s face it, she’s the only girl you’ve ever wanted and maybe it’s about time you tell her that.

I Promise You is a fun epilogue novella to wrap up the Barrett Boys series. If you’d love to revisit the Barrett ranch and check in with each brother as they help Jackson through the ups and downs of young love, then grab your copy for a final farewell to the Barrett Boys. See how the power of love can save, heal and restore.

I Promise You is the last book in the Barrett Boys series and serves as a sort of series epilogue. I really like this idea and it was awesome going back to the ranch five years later and see how all the Barret boys and their girls were doing. This book also had a brand new romance as Jackson, Annie’s sister, gets his own romance with his best friend Hailey.

I really enjoyed this book. It had a perfect mix of that happily ever after epilogue feel as well as a fresh romance. Jackson is a teenager now and he has always felt something for Hailey, in this book they have to figure out whether they missed their chance to get together or whether they can still make it work. Hailey gets wrapped up with another guy and there’s some danger later in the book as well. While Jackson has to deal with his own doubts about whether he belongs with his family and then his jealously when he finds out Hailey is dating someone else.

I liked Jackson and Hailey. It’s fun as we saw the first spark of friendship in book 1 when they first meet and it’s awesome to see them as great friends now who might become more. I always have a soft spot for friends to lovers romances and I really enjoyed this one. I could understand their hesitations and why they couldn’t make it work before and it was great seeing them have another chance.

Then on the other hand this book is all about checking in with the Barret Boys and the their girls. Some of them have married by now, there are pregnancies and we get to see where everyone is now. Arley is a little older now as well. The couples are all still going strong and the family is close and tight. I really liked seeing it. It was a bit jarring that the author used third person perceptive for everyone but Jackson and Hailey, as the whole series has been in first person perspective only. Somehow it felt kinda distant and not as natural at first and strangely enough I kept forgetting whose perspective I was in, but luckily it got better once I got used to it. I also thought it was a bit heavy and the marrying and pregnancies, but it does show how each couples path is different, which I liked.

To summarize: this was an awesome final book in this series. It has a bit of an extended epilogue vibe as we check in with the whole Barret family and there is a new romance as well as Jackson and Hailey get a chance at love. I liked Jackson and Hailey and seeing how they tried and make it work. They are such good friends and they always had that spark of it maybe being more. There is a bit of danger later in the book as well. I also liked seeing how all the Barret Boys and girls are now doing. We see how all the couples are doing and what’s happening in their lives now, which was fun. The third person perspective for everyone but Jackson and Hailey was a bit jarring at first, but I got more used to it later in the book. All in all this is a great ending to this series.

2 responses to “Review: I Promise You by Jordan Ford”