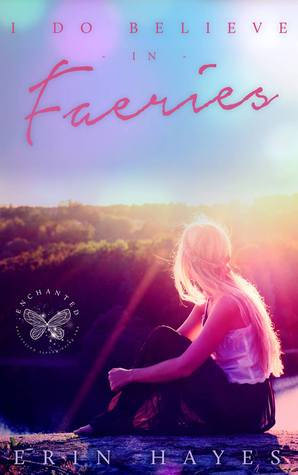 When a group of faeries offer her one wish, she doesn’t hesitate to wish for magick of her own. But wishes require a sacrifice. And that sacrifice is her friend Alaina’s unborn baby.

Magickal or not, Abby has to make things right. She ventures into Tír na nÓg to rescue the infant before it’s too late. There’s only one problem. Once she’s there, she may never be able to leave.

I Do Believe in Faeries is a fun read. It’s the third books in the Cotton Candy Quintet series, the series is a very loose one and can be easily read out of order. In this book we follow Abby, the sister of Jordan, the main character of book 2. We also meet a few characters of book 1 again, but it’s only little touches and scenes. I did like the connection this one had with book 2 as Abby is Jordan her sister. But as most time is spent in another world, the focus is never really on that part, but I still though it was a nice touch.

This was my least favourite book in this series so far and I feel bad about that. I think it’s me, not sure if I was in the mood for something different or had different expectations after the last book, but it just didn’t fully work for me. I did enjoy it and it was a nice quick read, but I just didn’t enjoy it quite as much as the previous books. I do like faerie books, but I felt like the faerie aspect fell a bit flat and there wasn’t enough time to fully explain the whole world. Maybe it’s the faerie aspect that didn’t fully work for me? The next book is about werewolves and I really like shifters, so I have hopes for that one.

With how the set-up is kinda serious, Abby makes a wish and accidentally gifts away someone’s baby, the tone of the book seems very light. A bit whimsical and silly and yes there is danger, but it never really felt too dangerous. Also how do you even steal a baby out of someone’s belly, how does that even work and how can these faeries even do that? That part seemed a bit weird to me. I would’ve liked a bit more explanation of how these wishes and magic worked. Maybe I kinda missed the darker tone from book 2, although book was lighter and a good one too.

Abby is a bit of a moody teenager at first and I have to admit I never fully warmed up to her, but I did like how she changed in this book. And that when she realizes she made a mistake she’s doing everything she can to make it right and she ends up sacrificing some things for that. I did admire that. I just felt like we never got to fully know Abby and I had hoped to get to know her a bit better, but I still enjoyed following her adventure in the faerie world. I just felt like there could’ve been a bit more depth to her struggle with fitting in in her family without magic and her feelings about that. It stayed a bit too much on the surface for me. Most of the characters stay a bit flat, but I did like seeing a few of the characters from previous books.

There is a bit of romance, but it’s a tad insta love like. Abby even realizes this herself, not sure if that made it more realistic or more obvious or maybe a bit of both. I just didn’t quite feel the romance and thought they didn’t know each other enough yet to get at the I love you point. I did sorta like how it get resolved. I thought it was a bit weird he was willing to risk so much for her, but how things resolved in the end did surprise me. I never fully felt their connection or why they liked each other, he helped her and that just seemed to be the extent of their connection.

The book is a bit too short to really allow for a lot of in depth world building, so while Abby travels to a whole new world here, It was hard to really get a feel for it. You know how supernatural creatures are done differently in each book and if you’re reading a book you’re trying to figure out which rules apply here and what not? It was a bit hard to fully do that here, we do get to see a bit of the faerie world, but it was a bit anything goes with some creatures thrown in, the courts, but not enough to fully understand everything, but enough to get a feel for things. They also keep referring to A Midsummer’s nightdream, which I haven’t read and thus didn’t get the reference.

To summarize: This was a fun, light and quick read, but it didn’t grab me as much as the two previous books. Abby goes on an adventure to the faerie world to save a baby she accidentally gave up in exchange for getting magic. There’s some danger and adventure, but overall the tone of this book is light. I never fully warmed of to Abby and would’ve liked to get to know her a bit better. There is some interesting character development and I did like how Abby did her best to correct her mistake. The romance didn’t quite work for me as I didn’t quite feel their connection. I did sort of like how the romance got resolved in the end, although it didn’t fully make sense. The world building fell a bit flat for me, the faerie world is a whole new world and I never fully got a feel for the kind of faeries in this book. And I didn’t get the references to a Midsummer’s night dream. All in all it was a decent read, but did fell a bit flat for me and I didn’t enjoy it as much as the first two books.

Do you like it when books refer to other books, stories etc?

16 responses to “Review: I Do Believe in Faeries by Erin Hayes”