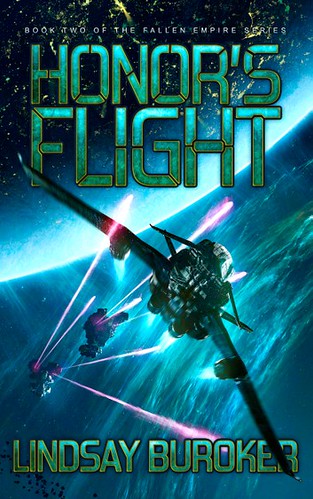 Blurb:
After spending four years fighting for the Alliance, fighter pilot Alisa Marchenko only wants one thing: to reunite with her young daughter. But this involves a journey to her former home world, which has become the last imperial stronghold. Since the imperials have a lot of reasons to loathe members of the Alliance right now, just getting down to the planet will be a challenge, and it doesn’t help that her passengers are stirring up trouble of their own…

Even if Alisa is able to land, she may find that more questions await her than answers, and that her late husband kept a startling secret from her, one that could change her life forever.

I really enjoyed book 1 in this series and I dived right into book 2 once I finished it. In Honor’s Flight Alisa Machenko is approaching her former home planet to pick up her daughter. This is the last imperial stronghold and she used to be an alliance pilot, she hopes they won’t run into any trouble. But ofcourse trouble is exactly what she runs headfirst into. This is a fast paced and action filled book with that vibe that everything will be alright in the end. It makes for a very exciting and enjoyable read and fits my current reading mood perfectly.

This was just as good as book 1, with the same combination of lots of action, trouble and interesting characters. Alisa hopes to be reunited with her daughter, but things aren’t as easy as she had hoped and her quest will take a bit longer. There is an interesting twist and reveal there. Then there is her hired security Beck who is still hunted by the mafia. There is a bounty on the head of her cyborg passenger Leonidas who also has his own quest. Alejandro’s orb is causing more trouble as more and more people seem to want it for their own goals. The only ones who don’t seem to attract any trouble is Yumi, one of Alisa’s quirky passengers who actually reveals some surprising knowledge in this book and Mica, the pessimistic engineer who is surprisingly likable.

I was afraid the group of characters would be split up in this book as they all head to the planet with their own plans. Without giving away many spoilers, let me say that they still spend a big portion together and I was glad for that and happy to learn more about all of them. I like how each of the character has their own goals and agenda’s. And while I can’t say every character is likable, tough most of them are, they are all interesting and realistic feeling characters. It’s also interesting to see the bit of tension that keeps simmering between the former alliance characters and the former empire characters. And the more we learn about both sides, the more I grow to believe that maybe neither of the two parties really is the good guy here.

Alisa is a great main character to follow. Her main goal is to find her daughter, but she’s definitely wiling to stick out her neck to help others too and I liked that about her. She is very loyal too and goes far for those she considers her friends. Although her honor does get tested in this book and while I felt a bit uncomfortable with something she did, it did feel in-character and in the end I was happy how things got resolved. I also like the slowly developing feelings she has for the cyborg Leonidas and am excited to see how that will develop in later books. It makes for an interesting situation with how they used to be on opposite sides and maybe still are.

It was nice to see a bit more of the galaxy in this book. Mostly the planet Perun, but there is also more we learn about the Alliance and the Empire. As well as some information about the Starseers. The world slowly gets more expanded in each book and now they’re on their way to another planet again.

To summarize: This was a great sequel. Just as action packed, full of trouble with with the uplifting “everything will be alright” vibe that I enjoy. I like how we learn more about the characters and most of them have their own troubles, issues and goals. It is a great group of characters to read about and they are all interesting even tough not all of them are fully likable. There are some interesting twists and reveals in this book as well as some interesting pieces of information we learn. And a lot of action and trouble the characters land in. It makes for a very exciting read. Alisa is a great main character she’s very loyal and I like her brand of humor. She did something I wasn’t fully comfortable with in this book, but it was very in-character and she did feel bad about it herself. I liked how it all got wrapped up in the end. There is some more we learn about the world and the factions too. At the end of the book they leave for another planet and I am excited to see where their next adventure takes them!