Today i am reviewing His to Protect by Karen Rock as part of the blog tour organized by Tasty Book Tours. I also share an excerpt of the book and there’s a tour wide giveaway.

His to Protect
by Karen Rock

Mission: Keep his eyes on the skies…despite one sexy distraction!

There are things a man can never undo. For Coast Guard search and rescue pilot Mark Sampson, it was the agonizing decision that cost him a teammate—and his faith in himself. But an unbelievably sexy blonde on a secluded beach may help him forget…if only for a night.

Cassie Rowe needed a distraction—and, boy, did she get one! How was she to know the brooding stranger who rocked her world was the pilot who’d left her brother to die? And now they’re on the same mission. She should hate him. But she can’t fight the storm of desire threatening to pull them under…

I have read most of Karen Rock her books so far and I was curious when I heard about her new book. Her previous books were all sweet heartwarming books and this one promised to be a bit more steamy and I was looking forward to see how she wrote that. His to Protects turned out to be a enjoyable and definitely steamy read. It was steamier than I expected, with quite some sex scenes in there. As I’ve gotten to expect from Karen Rock it was well written and touched upon some difficult issues.

My favorite part of this book was getting a view of the work of a coast guard/ rescue workers. Cassie and Mark both go on the same mission. Cassie is trying something different to honor the memory of her dead brother and Mark has been doing this work for years. We really get a feel of how both of these characters deal with the situations they encounter. The danger, the helping and the losses that are part of their work. There were some really intense scenes and the most heart wrenching one for me was when Cassie finds and older couple who needs her help. There are some really heart warming and touching moments and the setting and focus on this type of work was very interesting to me as I haven’t read as many books with that before.

I quite liked Cassie as main character. She’s always been the meek one compared to her daring brother and now she’s going on a mission to honor his memory. This is a story about loss and healing and we really see that part in Cassie. But this missions turns into so much more for her than honoring her bothers memory, she finds out what she wants from life and finds her direction. I really liked seeing her find her direction and going after it. I also liked how she kept an open mind and while she judged Mark at first I also liked how she found forgiveness when she got to know the whole story.

Mark was a nice enough character, but I never liked him as much as I did Cassie. I understood he was afraid of something happening to her, but I wish he would share his fears and talk about them and try to understand her instead of trying to control her. It was obvious he cared, but it felt like he went about showing that in the wrong way. There are some scenes were I really wanted to talk some sense in him. I did really liked the rescue swimmer who was his friends. He was a breath of fresh air and talked some sense into Mark at times. I hope his story is next!

The romance was hot and steamy. I liked how they met and how they took each others mind off the upcoming mission. Although at times it felt like they were either having sex or arguing. And I just wanted a bit more. I just would’ve liked a few more of the scenes were they talked to each other and had fun. I wanted a bit more depth to their romance and conversations. They both had something they struggled with, but I felt like the author could’ve delved into that a bit more. The romance also followed a bit of a predictable pattern, but that can also be because I’ve read multiple books by the author.

To summarize: I mostly enjoyed this one. It was quite a lot steamier than I am used to from this author. I especially liked the original setting and focus on the rescue work and the coast guard. This book deals with romance, but also with danger, loss and healing. There are some heartwarming and also some heart wrenching scenes. I liked Cassie and how she starts this mission to honor her dead brother and along the way found her path in life. Mark was interesting as well, but I didn’t like how pushy he seemed sometimes. He kept pushing Cassie away or trying to decide for her what she should do and I just wished he talked to her a bit more. The romance was hot and steamy, but I would’ve liked to see a bit more talking and getting to know each other. It felt like they were either having sex or arguing and I just never fully felt the romance because of that. All in all this was a great read and I am looking forward to the next book in this series as I think it will feature the rescue swimmer from this one and I am curious about his story.

Excerpt:
Cassie brushed back a strand of hair and the light gleamed on a charm dangling from her silver bracelet. An anchor. Recognition exploded in Mark’s gut. He’d been with Jeff when his friend bought a birthday gift for his beloved sister back home. Of course Cassie had worn it here. She carried her brother’s memory as Mark did, had followed it into the worst storm of the century.
As if he wasn’t feeling enough for her, tenderness swamped him at her dogged, gutsy determination. What was more, he desired her with a wild rush that shoved him to the edge of his control then drop-kicked him over it. The last shred of his resistance shattered.
He wanted her. Wanted the peace, the mindlessness that night in Clearwater had offered. Reason wasn’t working. Not even with himself.
“I still don’t want you on board tomorrow, but just dancing with you is killing me.” Bending his head down, he found the beat of her pulse and he brushed his lips against it. “What if we forget everything else for tonight and just…”
Her lips curled into a sexy, sassy smile and then she veered through an opening in the shrubs beside them. What the…?
At her shouted challenge, he leaped onto the beach. Her long hair flew behind her as she raced down to the water and excitement surged. The masculine need to capture, conquer, dominate galloped through him and he sprinted after her.
Just before she reached the water, he grabbed her waist and swung her around. Their laughter rang out then slowed when he turned her in his arms and lowered her slowly along the length of his body, feeling every luscious inch of her.
Above them gulls rode the winds, screeching and calling to each other above the noise of the surf, but his mind was too filled with Cassie to notice.
He placed his hands around her face and pulled it gently to him. “You’re not meek,” he whispered against her mouth.
He ached. Throbbed when her lips curved and her eyes danced up at him.
“What am I, then?”
“Mine,” he groaned and his mouth captured hers, feasting. He wanted to banish her hurts. Erase the pain that shadowed her eyes. He didn’t know if he could protect her from the storm tomorrow, but he could shelter her tonight, comfort her the only way he knew how. 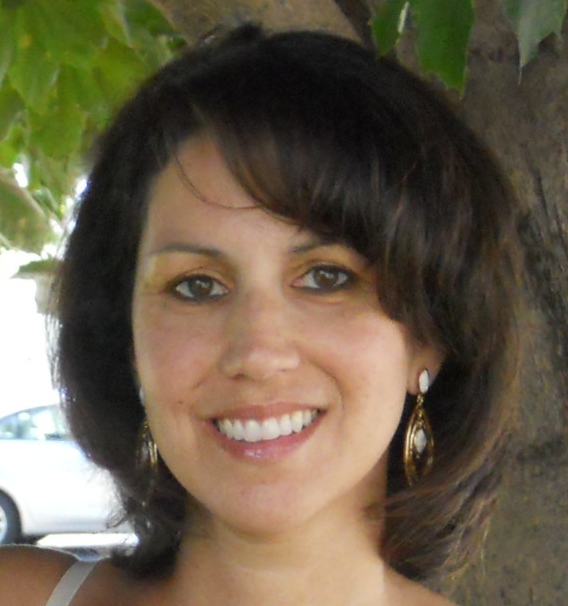 Award-winning author Karen Rock is both sweet and spicy—at least when it comes to her writing! The author of both YA and adult contemporary books writes red-hot novels for Harlequin Blaze and small-town romances for Harlequin Heartwarming. A strong believer in Happily-Ever-After, Karen loves creating unforgettable stories that leave her readers with a smile.
She enjoys returning to her teaching roots when speaking at regional and national writing conferences and interacting with other writers. She has a Master of Fine Arts in English and has continued to learn and grow professionally through her work with YA co-author, fellow romance author, friend and sister-in-law, Joanne Rock.
When she’s not writing, Karen is an avid reader who’s typically immersed in three different books at a time, all in different genres. She also loves cooking her grandmother’s Italian recipes, baking, Christmas (no need to specify—she loves every bit of it), and having the Adirondack Park wilderness as her backyard, where she lives with her husband, daughter, dog and cat who keep her life interesting and complete..

There is a tour wide giveaway. One winner will win a $50 Amazon Gift Card and autographed print copies of His Kind of Cowgirl, Raising the Stakes and Under an Adirondack Sky by Karen Rock. Enter the rafflecopter below for a chance to win:
a Rafflecopter giveaway

Have you read a book about character who did rescue or coast guard type of work? And if yes do you enjoy those type of stories?

22 responses to “Review: His to Protect by Karen Rock”