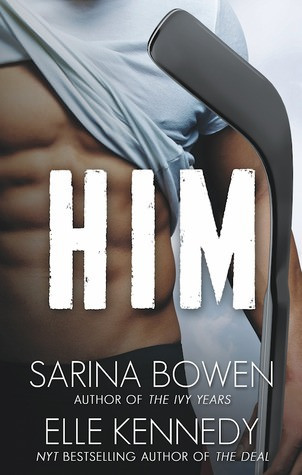 Him (Him #1)
by Sarina Bowen and Elle Kennedy

Blurb:
They don’t play for the same team. Or do they?

Jamie Canning has never been able to figure out how he lost his closest friend. Four years ago, his tattooed, wise-cracking, rule-breaking roommate cut him off without an explanation. So what if things got a little weird on the last night of hockey camp the summer they were eighteen? It was just a little drunken foolishness. Nobody died.

Ryan Wesley’s biggest regret is coaxing his very straight friend into a bet that pushed the boundaries of their relationship. Now, with their college teams set to face off at the national championship, he’ll finally get a chance to apologize. But all it takes is one look at his longtime crush, and the ache is stronger than ever.

Jamie has waited a long time for answers, but walks away with only more questions—
can one night of sex ruin a friendship? If not, how about six more weeks of it? When Wesley turns up to coach alongside Jamie for one more hot summer at camp, Jamie has a few things to discover about his old friend…and a big one to learn about himself.

Warning: contains sexual situations, hotties on hockey skates, skinnydipping, shenanigans in an SUV and proof that coming out to your family on social media is a dicey proposition.

I heard so many good things about Him that I knew I had to read it. I even planned for it to be my first MM romance book at some point, but that didn’t work out. And I only got around to reading it now. Sadly I feel like it fell victim to high expectations and my reading mood being more in the mood for a slow burn MM romance than a fast burn one focused on the heat. But mostly I just wanted more of those moment were I could feel how much these two cared about each other as a person.

Him follows the story of Jamie Canning and Ryan Wesley, they used to be best friends and spend each year 6 week together on an elite hockey camp. Then their last summer there something happened and they haven’t spoken since. Until they meet during a hockey championship and rekindle their friendship and it leads to even more than friendship.

I liked both Jamie and Wes well enough. They both had their own personality and dreams, although I still was confused a few times and had to double check whose pov I was reading as their voices could sound a bit similar at times, but for the most part I found it easy to separate them. They both were likeable enough and I liked the idea of these guys being best friends for such a long time and now rekindling their friendship. I also liked how over the course of the first few chapters we get to see a bit of their previous friendship and also what happened that last day of camp.

Jamie always thought he was straight and it was interesting to see him find out he was actually bi and how he slowly got used to that idea. And also how he got to see what Wes dealt with as a gay guy as he hadn’t seen that before. I found his change believable enough, but struggled a bit with the first time he acted upon it as I would’ve liked a little more build-up. Then again I am usually not a fan of jealously type scenes, so that also could be the reason why that scene didn’t quite work for me.

My main issue with this book was that I probably expected or was in the mood for a slower burn and more romance/ caring moments. Instead this book had quite a fast burn and quite a lot of sex scenes, nothing wrong with that, but I would’ve liked more scenes were they were together doing something other than sex or an activity that would eventually lead to sex. It felt like most of their relationship was shown through sex and at times they felt more like sex buddies than a couple who cared for each other, but I guess the point is that they don’t quite realize that at first that they could have more. I wanted to feel their love for each other more and see some sweet/ touching/ caring scenes too. And while they had been friends for a long time, most of that felt like it was in the past, I wanted to see more of that in the present too.

Wes always has had loved Jamie, but while we were told that often enough, I just didn’t quite feel it. I actually liked the build-up at the start and the last few chapters the most as I could feel their romance the most there. The last few chapters were really sweet and made me happy for the couple, I just wish there had been a bit more of that earlier in the book.

It also frustrated me a bit how these two didn’t talk at all, okay that’s an exaggeration, but they don’t talk nearly enough. They don’t talk about their future and dreams or their relationship. Not until the end after when they almost lose it all. I just would’ve liked to see them share those parts of themselves with the other and talk. There were some misunderstandings I saw coming from a long way, simply because these two rarely really talked. And to be honest I kinda understood Wes’ his ideas about what Jamie thought of them as he never says anything to indicate otherwise, but I also think Wes could’ve been more open about what he wanted.

I liked how most of the book took place at the summer camp, I hadn’t expected that and it was a fun backdrop for the story. I also liked how the focus is on hockey and it felt like the authors knew what they were talking about, but it also wasn’t too full of hockey. It had a nice balance between giving attention to the hockey part, without it being too much. There are some great side characters and I liked how the camp backdrop really worked here.

To summarize: If you’re looking for a steamy New Adult MM romance I would definitely recommend this one. I had fun reading it, but in the end felt slightly disappointed because my expectations were so high as I heard so many good things about this book. And I was looking for more talking/ caring/ being close in the romance, that was lacking in this book in my opinion. The chemistry between these two is quite obvious from the start, although I felt Wes’s side of it more than Jamie’s at first, but I struggled feeling their love for each other. And only in the last few chapters I felt like I really got a glimpse at that closeness and caring that I had wanted to see for most of the book. It also annoyed me that these two rarely really talked about things. There are plenty of sex scenes and quite the variety of scenes too. I liked how most of the book took place at camp as it made for a fun backdrop and the hockey aspect was well done too.

6 responses to “Review: Him by Sarina Bowen and Elle Kennedy”