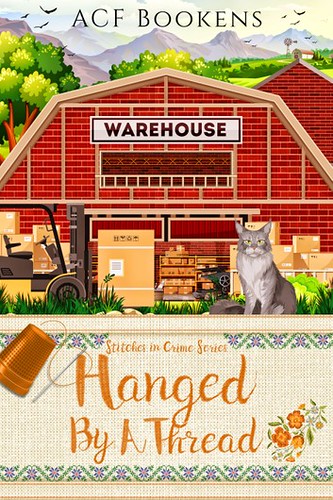 Hanged By A Thread (Stitches In Crime #3)
by A.C.F. Bookens

Blurb:
The promise of old printer’s trays has her heart aflutter, but it nearly stops when she finds a body at the bottom of the elevator shaft.

When salvage expert and historian Paisley Sutton heard that a 19th century printing press was still in the old warehouse that was scheduled for demolition, she knew she had to get in there. But when her dreams of a salvage windfall lead her on the genealogical hunt for the owners of the press and their descendants, she uncovers a story that promises to stay with her far longer than the income from her salvage operations.

When the story becomes public, will Paisley’s business be safe? Will she?

I am really enjoying this cozy mystery series and was excited to dive into book 3 of this series. Hanged by a Thread is another great read in this series. Main character Paisley stumbles upon another dead body in a house she’s excavating and gets involved in another mystery. Slowly she finds out more about the young women who died and who might’ve wanted her death.

I really liked this book. There’s something comforting about the small town feel, Paisley’s interactions with her son Sawyer, the sweet romance between Paisley and the sheriff and the group of awesome characters around Paisley. I really liked returning to this series and while the vibe of the setting and characters stays the same in each book, the mystery is very different in every book and gives each book a distinct feel. This series is quickly turning into one of my favorite cozy mystery series as I am really enjoying these books.

This book had a great mystery that kept me guessing for a long time. I eventually settled on one main suspect with two other potential suspects and it turned out my guess was right although I was still surprised by details when they came to light. This book deals with the murder of a young trans women and I liked how we slowly find out more about who she was. I liked how there aren’t a bunch of suspects from the start. In fact it takes quite some time before things become clearer and as more details come to light so do the suspects. I also liked how Paisley didn’t set out to solve this mystery, she just wanted to help remember this young women who died too soon. This gives the mystery and progression a realistic feel that I really appreciate in a cozy mystery as it’s hard to pull off.

The characters really help this series shine. I really like paisley, she’s so sweet and compassionate, but also stands up for what she believes in. I like her love for old buildings and her savaging job is fun to read about. She feels so real and I like that. Normally I am not a big fan of books with kids in them, but Sawyer really grew on me. I like how Sawyer really feels like a kid. And I also really how Paisley is as a mother, how she wants to teach him things and plays along, but also protects him by getting him out of harms way or letting her emotions out when she’s not with her son.

The side characters are awesome too. Paisley’s Dad and Lucille are both great, I like how caring they are and how they’re always there to help out and take care of Sawyer. Mika is a great friend for Paisley and I really like their friendship. Then there is the Sheriff who is now dating Paisley and I really like them together. They make for a great couple. I like how he is caring and worries, but also isn’t over protective or tries to tell Paisley what to do.

To summarize: This series is quickly turning into one of my favorite cozy mystery series and I love returning to this lovely small town and fun characters each time for another installment. The mystery in this one kept me guessing, but I ended up being able to guess right who the killer was. I liked how the mystery played out, with us slowly finding out more about the murdered women and the possible suspects. I liked how Paisley didn’t set out to solve the mystery, but was involved anyway as she was helping with the memorial for the dead women. It felt realistic. I really like Paisley and the awesome group of side characters. I can’t wait for the next book!

4 responses to “Review: Hanged by a Thread by A.C.F Bookens”