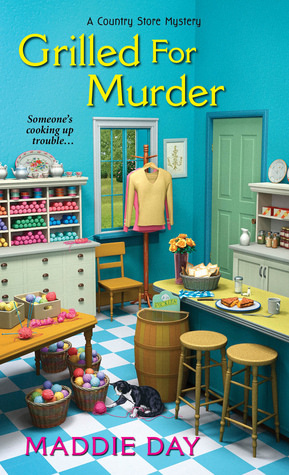 Blurb:
Robbie Jordan may have had reservations about the murder victim, but she still needs to turn up the heat on a killer if she wants to keep her new restaurant open for business…

In the charming small town of South Lick, Indiana, Robbie has transformed a rundown country store into the runaway hit Pans ‘N Pancakes. But the most popular destination for miles around can also invite trouble. Erica Shermer may be the widow of handsome local lawyer Jim Shermer’s brother, but she doesn’t appear to be in mourning. At a homecoming party held in Robbie’s store, Erica is alternately obnoxious and flirtatious–even batting her eyelashes at Jim. When Erica turns up dead in the store the next morning, apparently clobbered with cookware, the police suspect Robbie’s friend Phil, who closed up after the party. To clear Phil and calm her customers, Robbie needs to step out from behind the counter and find the real killer in short order…

Includes Recipes for You to Try!

As I really enjoyed the first book I couldn’t wait to get started on the sequel. As soon as I got approved for a copy on netgalley I started reading this one and I can gladly say it’s as good as the first book. I really enjoyed being back in this small town and Robbie her country store. The story starts with her hosting a welcome back party and then the next day she finds the person for whom the party was dead in her store. Robbie can’t help get involved in this puzzle.

The mystery was well done, although I wasn’t too surprised when we found out who the murderer was it also hadn’t been too obvious and I had a few other suspects as well. There were a few well placed clues and I liked trying to figure out the mystery alongside Robbie. She was trying to stay away and not get herself in danger, but she still was interested in the mystery and tried to help a bit. I did think it was handled realistically how she got involved.

Besides the mystery there are a few other sub plot lines and events. We get to see how the store is doing and Christmas is coming up. Then there is some focus on the side characters and a bit of romance. Enough was going on to keep my attention and I really enjoyed this book. The country store and Robbie her cooking and baking is still one of my favourite parts of the book. And it has a nice mix between focus on the murder and other plot lines.

I also was pleasantly surprised by how the romance developed. I began to have my doubt at first as I wasn’t feeling it, but then things changed and I liked up seeing in which direction her relationships went. It really is a sub plot and not much focus, but it adds a nice touch.

To summarize: I enjoyed this book as much as the first one in the series. There is an interesting murder mystery and while I wasn’t too surprised by the murderer it wasn’t too obvious either and there were some other suspects as well. I liked being back in this small town and Robbie her country store and I liked seeing the storylines develop and see how the characters were doing. There is enough focus on the mystery, but also enough other subplots to keep my attention. All in all a great book and I am already looking forward to the next one!

Tell me about fun jobs that book characters had that you read about?

14 responses to “Review: Grilled for Murder by Maddie Day”