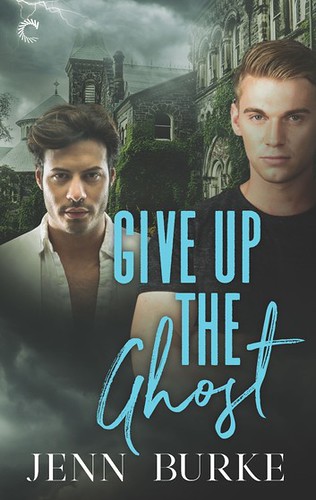 Give Up the Ghost (Not Dead Yet #2)
by Jenn Burke

Blurb:
The bigger they are, the harder they maul.

Immortal not-ghost Wes Cooper and his vampire partner, Hudson Rojas, have it all—rewarding private investigation work, great friends and, most important, a love that’s endured. But ever since Wes sent a demon screaming back to the beyond, his abilities have grown overpowering and overwhelming. He’s hiding the fact that he’s losing control the best he can, but it’s hard to keep anything a secret for long when your partner’s a former cop…and especially when your partner’s a former cop who wants to move in together.

When all hell literally breaks loose in Toronto and superstrength ghosts are unleashed on Wes and his friends, he and Hudson are thrown into a case unlike any they’ve seen before. To save the city, Wes needs to harness his new power…and find some answers. But when he gets them, the solution to fix it all could mean losing everything.

I read book 1 in this series earlier this year and really enjoyed it, so as soon as I saw the sign-up form for an ARC copy of book 2 I jumped on the chance to read book 2 early. Give up the Ghost is an excellent sequel, just like the first book there is suspense, a lot of paranormal stuff, secrets, reveals, a great romance and a tight group of friends. There so much to like about this series.

In Give Up The Ghost Wesley and some of his friends started their own investigation company and while they are already busy with non paranormal cases they get involved in some paranormal stuff as well. Multiple ghosts are on a place they shouldn’t be, imps in a café and other strange happenings. They try to figure out what’s going on. I had a theory, that was sort of correct or in the right directions at least, but also wrong on other points. It was a nice reveal when we find out what’s causing some of the trouble.

Besides the paranormal suspense plot line there is enough other paranormal stuff and character focused plot lines going on. Wesley is keeping a big secret from everyone and you just know it’s going to come out at some point and be worse than when he told everyone earlier. And that’s exactly what happens, but I also liked how it wasn’t blown out of proportion. It was a big thing and he hurt people by keeping it a secret, but they deal with it in a realistic way.

I really like the way the author blends the multiple aspects of this book, it has paranormal, suspense and romance all in one book and it’s all done so well. And I love this tight group of friends around Wesley and seeing how they all interact and work together. There are new side characters as well and more about the the characters we already know. I love how they have each other’s back and are there for each other, even while things don’t always go smoothly, it’s clear they care and are there for each other.

The romance is also well done. Wesley and Hudson are having some struggles they need to deal with. Wesley is keeping this big secret and has his own fears. Hudson is acting secretive too and it’s clear they have to deal with this before they move further. There are some relationship difficulties they have to deal with in this book, but at the end they emerge closer than before. I also like how even with the troubles they have, their love for one another is clear and there are a bunch of sweet and intimate scenes as well.

I also liked seeing how Wesley develops in this book, he has to make some big decisions and learn to deal with his new magic and what it means. I like how he still is the same character, but also changes. And after this book he probably has even more developing to do.

The world building turns a bit into an anything exist type of paranormal worlds, of which I am not a fan, but I like we don’t get overwhelmed with a multitude of paranormal creatures in this book and only get to see a few new ones in this book. I liked learning a bit more of the world and the paranormal creatures that exist in this world. I am not fully sure what to think of something that happens at the end, but I do like how it got resolved.

The main storyline of this book gets resolved, but there’s enough left open for future books in the series and I am already looking forward to book 3!

To summarize: To Give up the Ghost was an exciting sequel. It has paranormal, suspense, great characters and some romance too. And everything is blended well together. There are some strange paranormal happenings they’re investigating and I was partly thinking in the right direction, but also was surprised by a reveal. Wesley is keeping a big secret from his friends and I was waiting to see what would happen when the secret comes to light, and it was bad when it does, but I also liked how it doesn’t get blown up and was dealt with realistically. With Wesley’s secret and Hudson acting secretive they have some relationship issues to work through, but I also like how there are enough sweet and intimate moments and by the end of he book they seem closer than ever. It’s also great to see how Wesley develops and has to learn to deal with his new magic and what it means. The tight group of friends around Wesley is also great to read about and how they have each other’s back. There is more about the paranormal world we learn too. All in all this was a great read and I am eagerly awaiting book 3!

Tell me about some recent books you read with a tight group of friends?

4 responses to “Review: Give Up The Ghost by Jenn Burke”