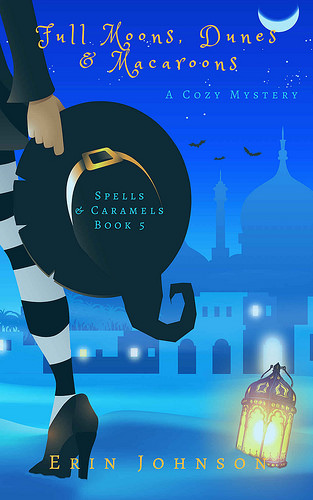 Blurb:
The big day has finally arrived, and Imogen, Iggy and the bakers head to the Fire Kingdom for Hank and Shaday’s wedding. Imogen is totally fine with it—or so she keeps telling herself.

Even the murder of a famous wedding guest can’t stop the impending nuptials. So when Imogen’s repressed feelings magically ruin her baking and she’s banned from the kitchen, she sets herself to finding the killer.

Her search leads her through the desert kingdom’s bustling marketplaces and the maze-like riad, to discover underground movements, shady characters, and more secrets about the people around her than she thought possible. Could the killer be the clever journalist or the rebellious palace maid? Perhaps it’s a member of the royal family.

With the Fire Kingdom’s people churning for change, a mysterious artifact missing from the museum, and a dastardly plot brewing, Imogen begins to feel the heat. When Horace contacts her and makes her a tempting offer, she struggles to choose between him and her new friends.

Imogen’s choice will have enormous consequences over a deadly plot that threatens the people she loves. Will she stop a killer and find a happy ending in the process? Or will an ancient legend come to life and destroy them all?

I can’t believe it’s been so long since I read the previous book in this series. I missed this world and as I was in the mood for paranormal cozy mysteries, this seemed like the perfect moment to get back to Imogen, Iggy and the rest of her friends. Full Moons, Dunes & Macaroons was such a fun read, like I’ve come to expect from this series. There’s a mystery, twists and ofcourse spending time with the familiar characters.

In Full Moons, Dunes & Macaroons Imogen and her friends travel to the fire kingdom, Prince Hank and princess Shaday are going to get married. But it’s mostly a political marriage as Hank is secretly in love with Imogen and Shaday has her own secret lover too. Imogen isn’t in a good place as she has to help prepare the wedding cake for a wedding she doesn’t want to take place. And once she messes up a bake, she gets banned form the kitchen and lands herself into the middle of a mystery.

I liked how this book builds further on the big twist from the last book and for a long time I wasn’t quite sure which side it would go and only toward the end you find out. There are some interesting twists and directions the plot takes. There were a few things I predicted, some pretty early and other only shortly before Imogen did. But there were also things I hadn’t guessed and I was thinking in the wrong direction for the mystery.

There is a lot going on in this book besides the mystery, the preparation for the wedding, baking, the mystery, Maple’s romance and Imogen’s interactions with another character. But even with everything going on the mystery was great too. I wasn’t sure how it tied in with the rest of the plot, but I love how it tied together at the end. I actually wasn’t sure who the murderer was and also didn’t focus as much on trying to figure it out and a possible suspects I had turned out to be completely wrong, lol.

I really enjoy reading about Imogen and her friends. And Iggy! Iggy is probably my favorite side character in this series, he’s awesome. I am happy Imogen took Iggy with her most times, after the first investigation scene in this book where she left him in the palace. I like how Imogen is curious and wants to solve the mystery, although at times she does take some big risks. I also like how even 5 books in, she still doesn’t fully have the hang of her magic and there’s this fun scene where she can’t think of a spell in a stressful situation, that was so Imogen. It feels realistic it takes her time to get better at magic and she does improve in each book.

I was happy with how this book wraps things up, it all felt like a very solid ending that wrapped up some plot lines, but also many more that are still open and that will continue in later books. I liked how things in the Fire Kingdom got resolved and I like Shaday even more after this book. I am really curious how the whole plot line surrounding Horace will continue with what happened in this book.

It also was great how in this book we got to visit the Fire Kingdom. I don’t think it actually was mentioned in the book where the fire kingdom was and how it was hidden. Which is a big thing with the water kingdom, so I wish it had been here as well. On the author’s Facebook page I found that the kingdom is in Morocco apparently. The culture was very different from the water kingdom and it was interesting to see the differences.

To summarize: another fun read. I am glad I picked up this book as it was the perfect read for my current mood. I had fun following Imogen, Iggy and her friends as they visit to the fire kingdom and solve another mystery. There is a lot going on in this book with the wedding, the mystery, some side characters plot lines and the plot line surrounding Horace and the badlands. The mystery was well done, I wasn’t quite sure who the suspect was, but it all made sense and nicely tied into some other plot lines too. I like reading about Imogen and how she handled herself and Iggy is still my favorite side character, he’s awesome. The world building gets expanded a bit as they visit the Fire Kingdom in this book and it’s interesting to see the differences between the kingdoms. All in all this was a great read and I hope to read the next book soon.

Tell me about one of your side favorite side characters in one of the books you recently read?