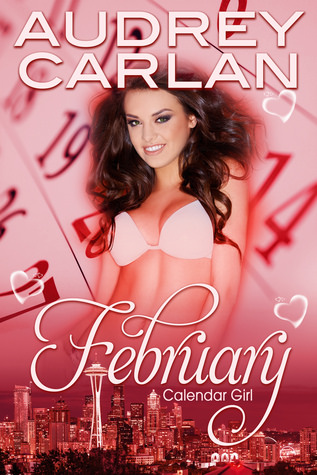 My Review:
I have to admit that I was a bit hesitant when starting February, with how things ended in the first book I wasn’t sure if I would/ could enjoy this one, where Mia meets her second client. And I have to admit I am not always a fan of the artsy types. I am glad to say that I really did enjoy this book. It’s a great sequel and a wonderful story. Mia learns and changes so much in this book and I think she comes out a better and happier person. Alec is her client in this book and I ended up really liking him, although he could be a bit of a workaholic at times, but I can relate to that.

Mia is to be Alec his muse for a month. This is very different from the paint and artist romance stories I read so far. Yes it’s sexy and hot, but also hard work and standing still for long times. It was interesting to read about the way Alec made his art and thanks to all the descriptions I could visualize the painting pretty well. Beside that there is a lot of hot sex scenes as well, but there’s also so much story surrounding it. I think the author manages to create a great balance between the sex and the story.

Alec was a great person and I think he came at the right time into Mia’s life and really was able to help her and see things in a different light. He learns her how to love and about the different types of love. He learns her how to love herself and see her own beauty. It was quite a powerful book and I liked seeing the change in Mia. Alec was a great person, nice and friendly, but also a bit pushy and a workaholic at times. I liked how serious he was about his art and how he worked hard on it. And while I felt like we got a feel for his character, I think it was more about Mia and how Alec was able to help her and how she could help him with his art.

These two are great together and they care about each other a lot, but their relationship is very different from Wes and Mia and I was happy with that. Alec is a Frenchman and there is some French sprinkled throughout the book, but it was done well and I never felt like I didn’t understand anything as Mia was always quick to ask what he said when he was using a new word or sentence. The ending of this one tugged on my emotions just like with the first book, but also in a different way. It’s just sad to see her month end with these guys after what she has been through. Even though it’s for the best that she goes on with this, that goodbye is still hard.

Mia struggles with some things about herself, her past and her job in this book. I felt like she underwent a change in this book and came out stronger. She shows vulnerability, but also strength. And it was great to see her become more at ease in her body and with what she does. There is this scene towards the end of the book that she struggles with her job, but I think that’s more because of how she viewed something than that the men really did something wrong. There’s also a fun scene involving her little sister and I get the feeling I learned more about Mia in this book.

To summarize: I really enjoyed this book. I was a bit hesitant at first, but that went away as soon as I started reading. Alec and Mia their relationship is very different than her relationship with Wes and I was glad for that. I think Mia learns some really valuable things in this month and Alec teaches her how to love herself and more. It’s hot and sexy, but there’s also depth, issues they work through. And it’s fun to see how Mia deals with the new situation of being a muse in this book. The ending tugged at my emotions again as the goodbye part is hard. It’s very different than the first book, but just as good and I can’t wait to read the next one!

What’s your favourite book where one of the characters is an artist?