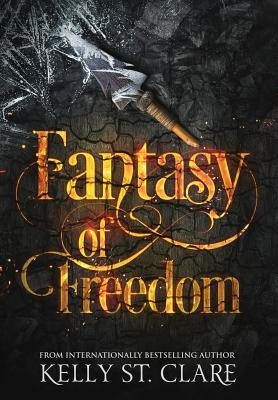 Fantasy of Freedom (The Tainted Accords #4)
by Kelly St. Clare

Blurb:
This is the heaviest the veil has ever felt. But I am the strongest I have ever been. The veil is nothing.

A part of me knew when I was taken from Osolis,
That when I returned–if I lived long enough to return–I would carry death and destruction to her doorstep.

That is the irony of peace.
It only comes after war.

My Review:
Fantasy of Freedom was such a great ending to this series! And this is such a great series. Fantasy of Freedom felt a tad darker than the previous books. It is tough to read at times, but while it has it it’s hard and sad moments, it also some high moments that are so uplifting and happy. And the epilogue was just perfect and I am happy with how things got resolved.

In this book we return to the world we haven’t seen as much about so far and there’s a war. The first 3 books build up so well to this moment and after I finished 3 book I was both excited and scared for book 4. It’s harsh and has some gruesome parts and some sad parts and you really feel the horror of war. Its heartbreaking at times and the message how no one wins in war was something that got conveyed here well. There were parts that made me angry, sad or scared for the characters and then the ending was just perfect and filled me with happiness. There were parts that were tough to read and parts I raced through as I had to know what happened next.

Everything Olina has gone through and you know in the last book she will have to face her mother. Her mother who was the villain, together with her uncle for most of this series. I won’t say how it turned out, but I felt that the scene fit the characters well and bought the the resolution they needed. It also sheds a lot of light on her mother’s character and fleshes out her personality a bit.

Another thing I really liked about this book are how we get to know some characters better and you really feel the shades of gray. People have been through difficult things, they made mistakes and some of these are back to haunt them now. There are some good guys, who we find out have done bad things, good people who turned into bad ones and bad people who are more gray than totally black. We learn more about these characters and they come alive even more with the new things we learn about them. And I like how it’s not so black and white for the most part.

Some big plot lines and questions are finally answered here. Like who is Olina’s father, who is the assassin, why did her mother treat her so badly growing up. It was great how this book gave us those answers and it wraps up the whole series and plot so well. It really is a great ending to this series and nicely wraps up Olina story, while leaving room to explore some of the side characters stories as well.

This series is in a way very much Olina’s journey. We see her change so much in this series and this book illustrated that so well now that she returns to Osolis and you see how different she is from when we met her in book 1. And how in parts she is still the same person, but also bend and continued on with her life and never let the horrors of her past break her. I liked how determined she is, but she also has her weaknesses and fears.

The romance continued this weird trend of me being annoyed with it and wanting these two together so badly. At the end of book 3 I was convinced they would finally be together for this whole book. But it turns out to not be as easy as that. And in some ways they are so much closer, they stand together, make decisions together and battle on. And in other ways there’s this distance between them and I really wanted to make sure they talked things through and then their anger and stubbornness gets in the ways at times. But I loved how their romance got resolved.

To summarize: Fantasy of Freedom was the perfect ending to this series. It was such a good book. It gets a bit darker than the previous books, with the war going on and truths we learn and things that happen. It really is heartbreaking at times and at the same time I think it’s good Kelly showed the reader the horrors of war and some great side characters die. It felt realistic, but also like a punch in the gut. Olina changed a lot throughout this series and maybe this book illustrates that the best. I liked seeing how she handled everything that came her way and how she stood besides Jovan and handled this war. Although the romance did frustrate me at times, I wanted them to shove their anger and stubbornness aside and just talk and listen. But the epilogue was perfect and makes everything right again. Although it is bittersweet because of all losses. This book perfectly concludes Olina’s story and I am excited there will be a few more novella’s about side characters. This really is an amazing fantasy series from the beginning till the end.

What’s the last series ender you read? Was it a good one?

8 responses to “Review: Fantasy of Freedom by Kelly St. Clare”