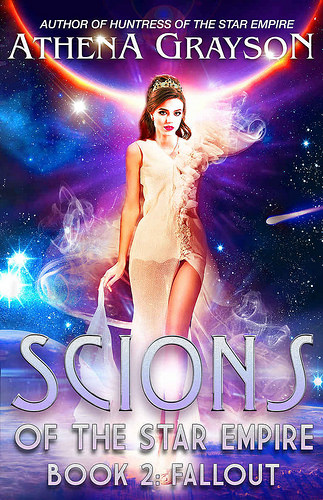 Fallout: (Scions of the Star Empire #2)
by Athena Grayson

Blurb:
A good deed is a hard sell when you’re a bad girl.

Among Landfall’s elite, reputation runs everything–even the economy. Princess Ione has cashed in on playing the party girl for most of her life, but not even an imperial princess can escape the fallout of one too many scandals. Her efforts to repair her reputation have tanked, but she gets one last chance to make good, by planning a charity function for an embattled colony world. If she’s going to go from party princess to people’s princess, she’s going to need all the friends she can get, including the man who could have been her prince, but can now only be her secret.

For Den Hades, his rising star comes with a dangerous tail. His father’s rage has only grown since Den’s one act of defiance ruined his House’s chances of alliance with the Imperial House–and kept him away from the princess who captured his heart. Den’s rising Social Capital edges him closer to achieving Scionhood and freedom, but his father’s influence peels more of Den’s friends away. As his friends buckle under pressure from their own Houses to choose sides, his only chance is to find allies among his enemies and keep his secrets closer than ever–including his secret relationship with Ione.

It’s not the fall that’ll kill you…It’s the sudden stop at the end.

Ever since I read Scandal last year I’ve been eagerly anticipating the release of this book. I received my copy just as I had finished my current read and dived right in to this one. It was a bit difficult to get back into this world as it’s quite the complex world and it’s been a year or so since I read book 1. But slowly I got back into the world of Scions and I really enjoyed this sequel.

Fallout mostly focuses on the fallout of what happens at the end of book 1. Den’s Social status is rising and he has a real chance at making scion. While Iona’s social status is at an all time low. Iona’s friends Meji also suffered a blow with how the person she loves might be out of her reach forever. And gossip journalist Pulne has some holo’s that could turn the whole society upside down, but when will be release these? The story is mostly told from Den and Iona’s point of views, but there are also some chapters from Pulne, Meji and a younger girl’s point of views.

Fallout is really well written. It’s the type of slow paced read that I enjoyed and I like every new tidbit we learn about this world and what’s going on. There are some big hints we get and I can’t wait to see those hints come to fruition and see how it impacts the future of these people and this world. It’s like I know a lot of these plot lines will go somewhere and having hunches of where they go and I cna’t wait to see it all play out.

And at the same time that slow paced thing is also what didn’t work for me at times. This is quite the long read and at times it felt like nothing much was happening. There is a lot of maneuvering, investigation, planning and set-ups and very little actual happening. The plot liens move forward slowly and some big plot lines continue very little throughout the book. And with the way book 1 ended I had hopes to see a bit more of certain topics, but now at the end of book 2 is the first time we see more of it. It also felt like the whole book was building up toward the party and then it ends on a sort of cliffhanger. And I just want book 3. There are also a few times where I would like a few things to be a tad more obvious, there are a lot of subtle hints and messages and while that was part of the appeal, at times I felt like I was missing some things.

While I might complain about the fact nothing happens, at the same time I also love the slow paced and seeing all the pieces move. And it’s one of those series I hope to re-read one day when the series is complete as I am sure I am missing some hints and set-ups and build-ups. And I love seeing the build-up and I know it will be awesome when all that build-up pays off. There are some plot lines I am so curious about to see how it will play out. And some things I know will be big when all comes to light and I cna’t wait to see how everyone will react and how it will impact the world.

I liked seeing Iona and Den adjust to their new situation in this book. It was interesting to see how they dealt with it. And they have to deal with what they really want and what they must do for their social status. Den knows his father isn’t happy with his public defiance at the end of book 2 and the question arises whether their house will go to war or not. Iona’s storyline might be the most interesting in this book, with how she has to decide which route to take and struggles with how she handles her social status. And I think she wants to be more than the party princess. It was itnerestign to see her slow and gradual change start in this book. And I really wonder what’s up with that mysterious building she investigates.

The ending was great. The whole story builds up toward the party at the end and a few big things happen there, although the romantic part and the storyline surrounding Den there might be my favorite parts. Although with all the build-up I had expected a bit more, but I guess we’ll have to wait for book 3 to see how everything plays out.

Due to what happened at the end of book 1 there is very little romance in this book. I wouldn’t have minded a bit more romance as I love seeing Den and Iona together, but most of the time they talk about the markets and social status instead of about them or their relationship. Iona’s declaration at the end was awesome tough and I also really liked her realization earlier in the book about what Den meant to her. I love the romance, I am just a bit sad there wasn’t more of it. It does make sense given the events tough.

The world building in this series is awesome. I liked how we learn more about the world in this book. And not only about the planet Landfall, but also more about the galaxy around it and the situation of the moons and colonies. It was great to get a bigger picture of that. And I am pretty sure we’re going to see even more of the rest of the galaxy and the storylines set up in this book in future books.

And besides the bigger world building, there is also the whole social status involved world on Landfall, which is so well thought out. With how who you know and what you do can influence your social status and that can bring you other things again. It’s really fascinating and I love how the author worked that all out. The whole social status thing can be very restrictive too, but that’s part of the plot of this series as well. I also liked seeing the middies and how different they were from Iona and Den who’ve been playing the whole social game so much longer already.

To summarize: I’ve been waiting a long time for this book and it was totally worth the wait. Fallout is a great sequel to Scandal. As the title suggest it deals with the fallout of what happened at the end of book 1. I liked seeing how those events influences everyone. There is so much build-up, maneuvering, planning and things going on. The plot is very slow paced, which is part of the appeal, but at times it can feel like nothing much is happening and the actual plot points move forward very slowly. There are also some plot points I hope to see advanced in this book that didn’t happen or only toward the end. But mostly I had a great time reading this book and I liked seeing everything develop and I can’t wait to see how all these hints and plot points will play out. I liked seeing Den and Iona deal with the fallout of what happened in book 1 and how they both changed a bit in this book. I like the romance, but am a bit sad there wasn’t more of it in this book. The world building is awesome and I liked how we not only learn more about this planet, but also the wider galaxy. And with all the things that are being set up and hinted at in this book I can’t wait to see how the rest of the series will play out!