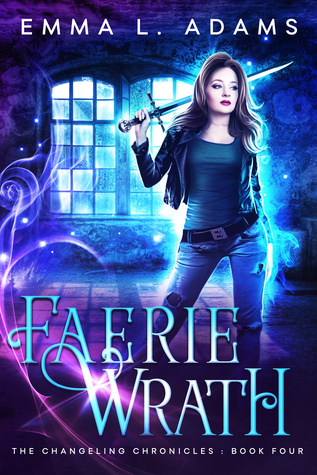 Blurb:
When ghosts start appearing all over town, my witch friend Isabel and I are pulled in to help the necromancers exorcise the wayward spirits. With the dead refusing to stay dead, it’s easier said than done.

And there’s something worse hiding on the wrong side of the grave.

As an old adversary puts a dangerous plan in motion, I’m forced to learn more about the magic I stole from Faerie’s darkest corner. But every step brings me closer to the veil, and if I’m not careful, I’ll be ripped away from the people I love and trapped in Death forever.

Another great read in the Changeling Chronicles series. In this book Ivy has another problem to solve, the dead are rising and the necromancers aren’t much help. She thinks she knows what’s going on, but ofcourse no one is listening to her. Except for Vance who always has her back. I disliked Lady Granville with how she so easily dismissed Ivy her warnings and ideas just because she wasn’t a mage. She really rubbed me wrong.

This book is again filled with lots of action, a fast paced story and magic. There are some great twists towards the end and I liked how the story developed. Like the previous books it starts of with something going wrong, then investigation and then it escalated into big trouble at the end. It’s a bit of a pattern every book has, but it works. I also liked how this one tied in with one of the previous books quite nicely and introduces a new problem that doesn’t get fully solved in this book.

Ivy is a great character to follow, by now she understands her magic a bit more, but there are still scenes were you feel she is a bit out of her depth. But I like seeing her improvise and finding a way out of whatever difficult situation she find herself in now. And I love Vance and Ivy together, they are great and I like how they fight together and have each other their backs. There is little focus on the actual romance, but the bit of romance that there is fits the tone of the book perfectly.

While book 3 focused on a problem with the shifters, this book focuses more on necromancy, necromancers, ghosts and undead. It was interesting to read more about that. The necromancers have played a role in all the books so far, but never as much as in here, with all the rising dead and ghosts around. And we get to know even more about the faeries, half faeries, faerie magic and even the veil and the death realm as well.

To summarize: all in all this was another solid read in this series and I am already looking forward to book 5! There an old adversary causing trouble and Ivy has to figure out what exactly is going on and what to do against is. Vance has her back, but the rest of the mage council isn’t inclined to listen to her. It’s filled with action, magic, supernatural trouble and more. This book focuses on the undead and it was interesting to see more of those and the necromancers. It nicely builds upon the previous books and we learn even more about the world.

What’s the last book you read that featured the undead?