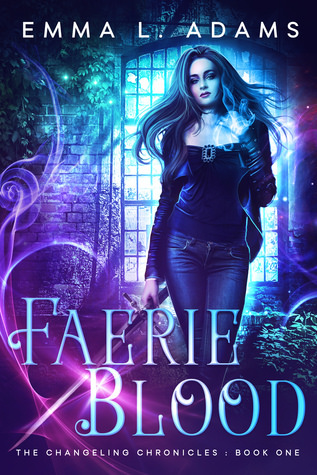 Blurb;
I’m Ivy Lane, and if I never see another faerie again, it’ll be too soon.

Twenty years after the faeries came and destroyed the world as we knew it, I use my specialist skills to keep rogue faeries in line and ensure humans and their magically gifted neighbours can coexist (relatively) peacefully.

Nobody knows those skills came from the darkest corner of Faerie itself.

When a human child disappears, replaced with a faerie changeling, I have to choose between taking the safe road or exposing my own history with the faeries to the seductively dangerous head of the Mage Lords. He’s the exact kind of distraction I don’t need, but it’s work with him or lose my chance to save the victims.

It’ll take all my skills to catch the kidnappers and stop Faerie’s dark denizens overrunning the city — but if the faerie lords find out about the magic I stole last time I went into their realm, running won’t save me this time…

Faerie Blood is a great Young Adult Urban Fantasy book filled with action, magic, supernatural creatures, awesome characters and a fast paced storyline. From the first chapter this book had my attention, it start action packed with hints of a dark past and I wanted to know more. It only gets better form there on. Someone’s kid has disappeared and Ivy accepts the case. Then the Mage Lord gets involved and things get even more interesting.

The story has a fast and steady pace. The story is direct enough that its easy to follow, but it also turns out soon there is more going on than the characters thought. And something bad has happened to Ivy in her past, enough hints are dropped at the beginning to make me even more curious about what exactly happened to Ivy. I really enjoyed this book and already can’t wait to see where the second book takes us. There are some interesting twists at the end, and some action packed scenes before the book got wrapped up nicely with just a hint of what we might see in the next book.

Ivy is a great main character, she is headstrong, isn’t afraid to say what she means and she’s a bit too reckless and stubborn at times. She runs into danger without a second thought and thinks she can do everything alone, while sometimes she could use a little help. She cares a lot of about her best friend Isabelle, but she never opened up about a dark event in her past. I liked Ivy as a character, although I had wished she had opened up to the Mage Lord earlier, but I can also understand why she doesn’t. I liked seeing the banter between the mage lord and Ivy and there’s even a hint of romance, which totally worked for me. The Mage Lord was an interesting character and we learn a bit more about him as the story progresses although he also keeps part of that mysterious imposing feel. The side characters get a bit less fleshed out, but I still liked what we saw, especially Isabelle, Ivy her room-mate and the Pixie who lives in their house.

The world is very interesting and original, years ago the Faeries came to this realm and wrecked havoc. It felt a bit like a supernatural apocalypse and now years later the Faeries are gone, but the world is forever changed and many supernaturals are out in the open now. The Faeries also are called named Sidhe, Fae or other names sometimes, which could be a tad confusing at times. Then there is a bunch of other supernaturals like necromancers, shifters, mages and witches. It was a bit overwhelming at first, but slowly we got a better feel for what each creature was and their place in this new world. Although I am still not 100% sure what the mages and witches can do and what if any is the difference between the two. The world building was done well overall and it was interesting to learn more and more about the world, the magic ad the supernaturals.

To summarize: I really enjoyed this book, it had a nice and steady page and a story that kept me interested. There’s a lot of magic, action and supernatural creatures. I liked main character Ivy, she was headstrong and likeable, although she also could be a bit too stubborn and reckless at times, but it ft her personality. There’s a bit of mystery about what exactly happened in her past and nice twist later in the book. I also liked the Mage Lord and Ivy and his banter and the hint of romance, which totally worked for me. This book has an interesting world where the Faeries invaded and that hasn’t been the same since then now all the supernaturals are out in the open. I am looking forward to the next book! I would recommend this if you’re looking for a good YA urban fantasy with lots of action and magic.

Have you read a book recently about Faeries or Fae?