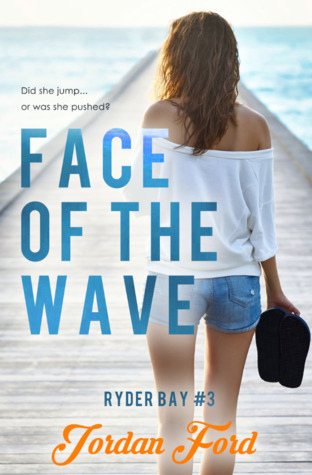 Face of the Wave (Ryder Bay #3)
by Jordan Ford

Blurb:
She was out cold. He was her lifeline. Will their unlikely connection survive the shocking truth?

Skylar’s memory fractured when she fell from the pier. After waking from a coma, the high school troublemaker has no clue if someone pushed her or she jumped. Surrounded by confusion, she discovers the kind voice that protected her unconscious moments belongs to a boy who’s nowhere near her type…

Jed watched over the elitist Skylar when nobody else seemed to care. As a chubby black kid from the wrong side of town, he’s completely shocked when the beautiful rich girl actually wants to spend time with him. But in a world where popularity is paramount, Jed’s feelings could get him in serious trouble.

As they sift through the wreckage of her fragmented memory, Skylar and Jed discover an undeniable attraction.

Will uncovering the truth of the past rip them apart or give their unlikely romance a fighting chance?

Face of the Wave is the third book in the captivating Ryder Bay YA contemporary romance series. If you like sand and surf, star-crossed lovers, and a dash of dark tension, then you’ll adore Jordan Ford’s compelling novel.

I received a free copy form the author and voluntarily reviewed it.

Skylar’s story already started in book 1 when she falls off a pier and lands in a coma. This book would finally reveal what happened to Skylar and was I quite excited to get started and find out what happened to her, did she jump off that pier or was she pushed? I had my theories about this and who was involved, but the author managed to surprise me with some great twists.

While the first 2 books are quite light and uplifting and they touch upon some heavier topics, Face of the Wave has a much darker and heavier feel than the previous two books. And it makes sense given what Skylar’s gone through, but it took some getting used to as the tone was so different. I also can’t really say it’s a fun read most of the time, but it is a good book. The author handled the topics very well. It deals with some difficult topics and at times it was hard to read. But there are also some uplifting and happy moments, which helps.

Skylar was one of the most popular girls at their school. She’s rich, pretty and not afraid to show that off. She had a hot boyfriend and even a guy who sort of stalks her. She liked being admired and seems to be the girl who has everything. Which all changes once she wakes up from the coma. She’s not the same Skylar anymore, she is more anxious, doesn’t feel the same, thee’s this black space in her mind about what happened and her behavior changes quite a bit too. It was interesting to see how much Skylar changes, she wasn’t the most likable character in book 1, but in this book she’s a different person.

While there is a romance, this book is first and foremost Skylar’s story. It’s about Skylar having to figure out who she is now, about figuring out what the black space in her head protects her from, what really happened that night at the pier and then once she knows that how to deal with and move forward. It’s heartbreaking and sad to read what Skylar went through and her feelings and struggles surrounding everything made me feel so sad. I am so glad she has a great group of friends around her to help her through this.

The group of friends that form throughout this series is one of my favorite parts of this series. I love how they form this close knit group that’s there for each other. And how they have each other’s back. I really liked how Skylar and Harley form a tentative friendship in this book and I liked their friendship more than Skylar’s friendship with Savannah. I actually felt Skylar and Savannah’s friendship was quite strained, while Skylar’s friendship with Harley is so different and they have more in common than they thought. I really liked how Harley is there for Skylar as it’s such a surprise. I also liked Aidan and how she has his cousin’s back. I like seeing these characters all interact with each other.

And there is Jed, the love interest for Skylar. And while the full focus isn’t on the romance, I do think it’s a great romance. I just wished we get to see more of how their romance continues as it feels like this is only the beginning. I liked how their romance takes a less common path than we usually see in romance books. I also liked how the author gave Jed his own story as he’s the type of character that usually stays to the sidelines. It did bother me how often he got referred as fat as I just wanted to tell them all how irrelevant that was as he’s such a great character. But luckily the people around him do realize what a great person he is. He’s sweet and supportive, he’s there for Skylar in a very selfless way, being what she needs. And I liked seeing how Skylar slowly falls for this sweet guy who’s so different form the guys she normally goes for, but who is so perfect for her.

To summarize: Face of the Wave is a heavier read than the previous two books in this series as it’s about Skylar who landed in a coma and is now awake. This book is mostly Skylar’s journey, her journey to find out the answers to what happened to her that she can’t remember at first and also her journey to find herself. There is a sweet romance as well as Skylar falls for Jed who is such a sweet character who’s there for her. I also liked seeing the characters from previous books again and I especially liked the tentative friendship that Skylar and Harley start. Skylar changes a lot from who she was in the first book and it was interesting to see, but the reason behind it is very sad as she went through something horrible. It’s a bit of a sad story and hard to read at times as Skylar is remembering what happened to her. But there are moments of light as well and it’s a very well written story.

What’s the last book you read with a less common romance path?

4 responses to “Review: Face of the Wave by Jordan Ford”