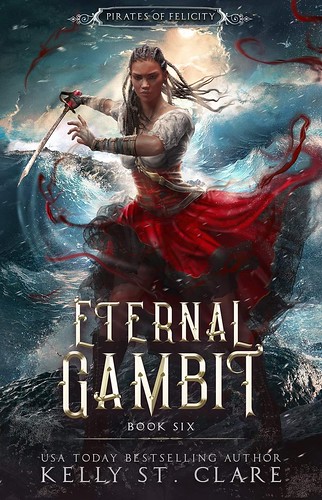 My very life—and the key to escaping Davy Jones’ Locker—rests in figuring out Mutinous Cannon’s sinister plan.
He needs my crew in hell.
We have to figure out why before time runs out.

But Plank is sinking into an abyss where none of us can follow, Mutinous’ presence has rocked my fathers to their very cores, and now I find myself unable to ignore the heat mounting within me.
. . . Yet giving in to my feelings for one will hurt another.

I can’t lose my fathers, my crew, to the horrors of their pasts.
Their demons must be conquered.
As must mine.
The Eternal Gambit must be untangled.

Join this pirate crew for the adventure of a lifetime as they battle to stay afloat. A story with layers and a large twist of humor, embark on this exciting new tale by USA Today Bestselling author, Kelly St Clare, today.

Eternal Gambit is the sixth book already in this pirate fantasy adventure series. I’ve been really enjoying this series so far and with each passing book I only get more curious how this series will end and if everyone will make it out alive. The characters have collected most of the magic items they had to find, but now land in quite the desperate situation.

In this book Ebba-Viva, her fathers, Caspian and Jagger are stuck in hell along with an evil dead pirate and his minions. I wasn’t sure if I was going to enjoy the book at first as the whole stuck in hell plot line seemed a bit weird to me at first, but strangely enough it did work for this story and the more we learn the more it makes sense. And even tough they are sort of prisoners for a big part of the book, there is still enough happening to keep it interesting.

While this book has less adventure and action it’s filled with reveals and more emotional and character development. And there’s still enough to discover in this new place they’re in and enough that happens to them that they have to deal with. They have to figure things out about hell and what Cannon’s plan for them is. Then Ebba-Viva has to face the truth of what the amare (one of the magic items they collected) showed her at the end of the previous books and she has to come to terms with her feelings and address those. Which was great to see even tough I am sad she didn’t go for the other guy, it was clear from the start that she would pick this one eventually. Then there are some new truths they have to deal with too.

After I finished this book I took a moment to think back to book 1 and how far everyone has come and it’s just impressive to see how much the characters have developed. Ebba-Viva especially, she has really grown into her own. She has been through so much, but it changed and developed her into the person she is now. She knows her mind and really stands up for what she believes in and fights for the people she cares about. It’s been wonderful to see her grow into the person she is now and also how she is ready to fight for the fate of her crew and the fate of the world. Her character development over the course of this series is awesome to see.

But not only Ebba-Viva has grown, also her fathers have changed and Caspian and Jagger have been through a lot too. Jagger changed quite a bit too and I have the feeling we will see more of that change in the last book. Then there is Caspian who has some big development in this book too. I like Ebba’s six fathers and how different they are and I also like to see how Ebba-Viva’s fathers interact with her. And how they changed throughout the series and most faced a lot of the truths and past they struggled with and this book continues than pace and shows us more insight in Plank’s past.

To summarize: This was another solid book in this series. It starts with a bit of a desperate situation and I wasn’t sure if I would enjoy the setting of this book, but it actually worked quite well and was more interesting than I would’ve expected when we learn more about this place. While this book has less action and is more stationary than previous books, there is still enough going on and there are some reveals, changes for the characters and truths they have to deal with. There is also some development on the romance part, which was interesting to see. It’s especially awesome to see how far Ebba-Viva has come and how much she has developed over the course of the series. All in all this was a solid read and I am really looking forward to the last book in the series and seeing how it will wrap up this series.