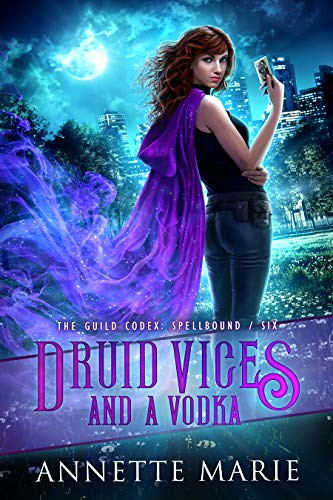 Druid Vices and a Vodka (The Guild Codex: Spellbound #6)
by Annette Marie

Blurb:
I’ve said it before, but sometimes I’m a bad person. I cheated on my twelfth grade math final, I’ve run countless yellow lights, and I gossip about how hot my kickass best friends are. (Good thing my job as a guild bartender doesn’t require moral perfection.)

But there’s bad, and then there’s bad. And I’m not sure which applies to a certain dark druid/wanted criminal/reluctant friend of mine. His transgressions include black-magic dealings, kidnapping, and murder, and he’s about to add “revenge-fueled killing spree” to his resume—if I don’t stop him.

Should I stop him?

He and his nemesis are gearing up to tear each other apart, rogues and vultures are converging with their sights on the spoils, and the guilds that would normally stomp them into the ground are under attack. We’re on the brink of an all-out criminal turf war, and my time to decide is almost up.

Who’s the real bad guy … and do I dare stand in his way?

I love how this series and the spin-off are progressing and with this book being advertised as tying the series together even more strongly I was excited to dive in as soon as I got my copy. Druid Vices and a Vodka is another action packed read in this series with some big reveals and twists. Some bad things happening and ofcourse hope as well. It was an intense read for sure.

Druid Vices and a Vodka brings back Zak’s character, but he’s not quite the Zak we know. Blinded by rage, grief and a need for vengeance. This book shows a new side to his character. And as the blurb hints at, Tori has to decide what to do. Will she stand in his way? Stand next to him? Help him? I have to admit I found it interesting to see the direction this plot line took. I thought it was realistic how everyone acted. And it kept me guessing and wondering how bad Zak really is and what he really cares for and even with what happened at the end I don’t think we know everything yet. It feels like there is so much more to Zak than we know and this book sheds some light on it and the complicated emotions he deals with. And that scene at the end, I really applauded Tori for what she did and said and how she handled it and the decision she made. I am curious to see how this will develop next.

One of my favorite parts of this series is seeing how Tori develops throughout the series and how as a normal human in the mythic world she holds her own. She had an artifact she has on load to her repertoire in this book and it sure comes in handy, but also has a big price. I like how we see her using her paint gun with more efficiency in this book. She really found a way to be helpful and effective even without magic. And then what happens at the end. I am not sure how she will adjust with what happened and I am curious what will happen in the next book.

This book was full of some big reveals, developments and twists. Besides the Zak plot line, there is a big development regarding Kai and his family and some new information and development with that. Then there is the whole Ezra situation, Tori knows more about what’s happening to him since the end of the last book and it’s hard for them both to deal with. I liked how Tori holds on to hope and does her best to save everyone.

Then there is the whole criminal underground that is in upheaval and the guilds are trying to figure out what’s going on. It almost feels like a bit much, but the author balances the different plot lines well and it all weaves together perfectly. Giving focus to one point and then another and then bringing everything to an epic conclusion. While some plot lines still remain open and others get some answers, like usual for this series.

I also enjoyed seeing Tori’s relationship with the other characters develop. How her relationship with Ezra develops was awesome to see and also heartbreaking at the same time due to what’s going on. They had some great scenes together. The whole development with Kai adds some depth to his character and also shows more of how close these characters are.

It also was amazing to see the two series interact a bit more in this book. Tori and Robin go on an outing together and I think their goals might overlap more than they realize. I like seeing Robin from Tori’s point of view and it was so fun to see them interact together. With what few pieces we get about what Robin’s up to I am even more curious for her next book and finding out what she’s up to.

To summarize: This was another entertaining action packed book in this series. With each book the stakes seem to get higher and this one has one epic ending. So many things coming together, a big battle and consequences. There are lots of reveals, twists and interesting developments in this book. There are multiple plot lines going on, with Zak, Kai, Ezra’s situation and the whole criminal underground upheaval. It’s all mixed together well and made for a book that was hard to put down. I like seeing Tori develop throughout the series and how she handles being a human in the world of mythics. I enjoy seeing her interact with the other side characters and also how her relationship with them and especially Ezra develops. I also liked seeing this series and the spin-off intersect a bit more and it was fun to see Tori and Robin together for a bit. And after this book I am even more curious about what will happen next.

10 responses to “Review: Druid Vices and a Vodka by Annette Marie”