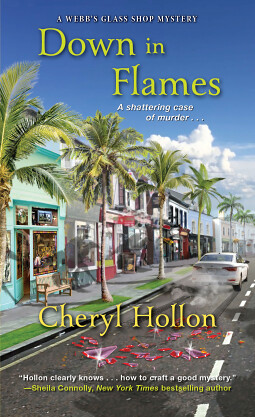 Blurb:
A fatal hit-and-run in front of Savannah Webb’s glass shop proves to be no accident . . .

A highlight of Savannah’s new glass bead workshop is a technique called flame-working, which requires the careful wielding of acetylene torches. Understandably, safety is a top priority. But as Savannah is ensuring her students’ safety inside, a hit-and-run driver strikes down a pedestrian outside her shop.

The victim is Nicole Borawski, the bartender/manager at the Queen’s Head Pub, owned by Savannah’s boyfriend Edward. It quickly becomes clear that this was no random act of vehicular manslaughter. Now the glass shop owner is all fired up to get a bead on the driver–before someone else meets a dead end . . .

I always have fun with this series set around the Webb’s Glass shop and this was another enjoyable installment. Although it got a bit sad at times and the start of the book was a bit slow for my taste. I did like the mystery and managed to figure out who the murderer was. I also like learning more about glass thanks to these books and reading about Savannah’s glass classes. It’s great to see some familiar characters again too.

The start of this book felt a bit slow for me and a bit too emotional. I don’t mind when cozies get a bit emotional, but with the victim not dying immediately and being someone the characters knew, it took a while to get the mystery started with the focus being on the loss and a sad hospital scene at the start. The mystery also was a bit slow to get started as it looked like an accident at first. Once the mystery gets started I got pulled into the story. There also are a bunch of personal issue and another sad scene later in the book.

The mystery was a decent mystery. It’s a bit slow to start and there weren’t as many suspects at first that felt right. I also felt that there wasn’t as much attention and speculation for each suspect. I had a guess about who might be behind it and I thought it was a pretty strong clue, but they have no way of following up on it at first. Then at the end there is a clue that brought it all together for me, but the characters don’t pick up on it and only figure things out when the murderer reveals themselves, which wasn’t as satisfactory as having them figure it out.

There is also the case of Jacob being the only eye witness to the hit-and-run and him being mute and having memory loss for most of the book. While it made sense and felt in-character it also felt like a convenient way to keep an important clue hidden till late in the book. I was happy how it was a mystery you could figure out as the reader as I always enjoy doing that, if you pick up on that one clue. Savannah’s connection with the mystery through her art knowledge was a bit far fetched on this one, especially as it wasn’t one of her area of expertise. It did make sense why she would get involved and it is nice the police trust her enough to let her help.

I enjoyed spending time with the familiar group of characters again. It’s always fun to spend time with character you’ve grown to know and see how they’re doing. Although it’s quite the stressful book for the characters. With a big competition going on where Edward’s pub participates, but without his manager things don’t go as smoothly. Then there is Savannah who is managing her shop and classes, supporting her friends and trying to solve the mystery. Amanda’s mother is not doing so well so she’s out of sorts and going to the hospice a lot. Then there is Jacob who is mute and has memory loss, so he’s dealing with a lot too. They all deal, but I would’ve liked a few calmer moments. I did like the scenes with the new police station as that actually made for a bit of comic relief at times. It’s fun to be able to get the police their point of view as well. I also liked to see how Savannah and Edward are doing as a couple. And the twin who always attend the glass classes are great too. The mystery was mixed in well with all the other topics.

To summarize: It was fun to spend some time with the familiar characters again and in Webb’s Glass shop. I found the start of this one a bit slow, once the mystery started I got pulled more into the story. I also thought this was quite the stressful book for the characters with everything they have going on and it could be a bit sad at times too. I did like the mystery and I managed to figure out who the murderer was after an important clue. It was a bit unsatisfactory how the main character doesn’t figure out the murderer’s identity until the murderer reveals themselves. There were some fun scenes surrounding the new police station and I also enjoyed the glass shop scenes. All in all this was a solid read, but for me not one of the better books in the series, although it still had plenty of things I enjoyed.

In this book the main character gives glass workshops. Have you ever followed a workshop for a craft?

4 responses to “Review: Down in Flames by Cheryl Hollon”