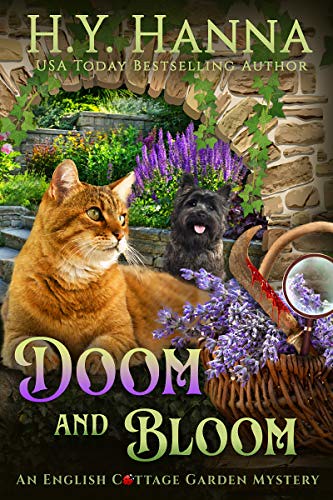 Blurb:
Poppy is settling into life in an English village and gaining some green fingers at last as she restores the beautiful cottage garden nursery she’s inherited. When she meets a wealthy dog lover at the village fête and is hired to create a “canine scent garden”, the future looks rosy… until the day ends with a vicious killing and she finds herself spade-deep in a murder investigation once again.

Meanwhile Einstein the terrier has fallen head-over-paws for a pampered poodle and Poppy has her hands full keeping him out of trouble. With vandals attacking her cottage and orders for flowers flooding in, she barely has time for sleuthing! But when unexpected help comes from her mad scientist neighbour Bertie, as well as crime author Nick Forrest and his talkative cat Oren, Poppy is sure she’s found the killer…

The only problem is – with false clues and suspects galore, could she be barking up the wrong tree?

Having enjoyed the first two books in this series I excitedly dives into book 3 and it was just as good as the first 2 books. Doom and Bloom starts at a village fête, where not only is Poppy hired for another gardening job, but there also is another murder.

I really enjoyed this third book in the series. It has another solid mystery, with plenty of suspects. Motives that are unclear and multiple people who are hiding something. It kept me guessing and so many people seemed suspicious or like they were hiding something. I liked how the mystery progressed. The reveal of who was the murderer came as a surprise as I was thinking in a totally different direction and there weren’t as many hints in this person’s direction, but it did make sense. I also liked how there were other truths that came to light as well and the suspicious behavior of other characters also made sense. It all was nicely wrapped it.

The mystery did have a slight case of incompetent police, which I am not a fan of usually, but it only slightly annoyed me a few times here. As the standard detective is away for a bit, another officer who jumps to conclusions handles the case. I was happy that this is only for one book and it was interesting how it shakes up the investigation and mystery dynamic a bit.

Another thing I love about this series is seeing how Poppy finds her place in this village and slowly starts her business. In this book she makes some important and big steps toward starting her business, but it’s also clear she still has a lot to learn. I also like how she accepts advice from some of the villagers and it was lovely to see her business starting slowly.

I like the gardening theme of this series as well. It’s fun to read about the different flowers and Poppy’s gardening skills and also her mistakes. I have very little knowledge about gardening, so I feel like I learn some new things every time I read one of these books and can totally understand why Poppy makes some mistakes along the way. The doggy scent garden in this book also made for an interesting topic to read about.

HY Hanna always does a great job with the side characters too and this series is no exception. I’ve grown fond of the eccentric scientist Bertie, grumpy writer Nick, Poppy’s friend Nell, the detective Susanne and many of the other villagers. As well as two great pet characters, Oren and Einstein. Then there are some new characters that get introduced in this book and a new pet as well, that fill out the cast. It was great to see how Poppy interacts with them all.

To summarize: This was another great installment in this series. With a great mystery that kept me guessing, a fun cast of characters and the garden theme this a series you don’t want to miss if you like cozy mysteries. The mystery was a good one with plenty of suspects and it kept me guessing. the actual murderer came as a surprise to me as I was thinking in a different direction. And it was interesting when all the reveals come to light that explain some of the characters their suspicious behavior. I also liked reading about Poppy and her gardening adventures and how she makes some important steps toward starting her business. The side characters are always so fun to read about too. I am quite fond of Bertie, Nick the mystery writer who can be both grumpy and helpful and the pets Oren and Einstein are a fun addition too. It’s a great series so far and I had a lot of fun reading this book.

4 responses to “Review: Doom and Bloom by H.Y. Hanna”