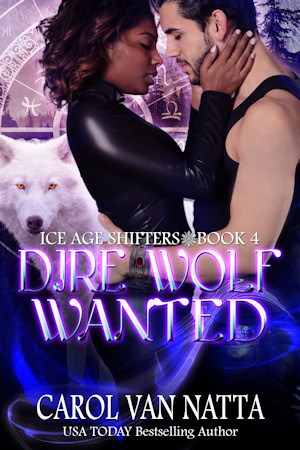 Blurb:
The magical world stands on the brink of war, unless two extraordinary shifters can bridge the gulf between them.

Dire wolf shifter and Shifter Tribunal agent Rayne Chekal poses as a prisoner to take down an illegal auction house that trafficks in shifters. Arvik Inuktan, agent for the Wizard Imperium and secret mythic shifter, infiltrated the auction staff with the same mission objective.

Rayne finds him sexy as hell, but confusing. Her inner wolf says they’re in the mating dance, but to her, it feels more like a flailing tumble down the stairs. Arvik finds her irresistible, smart, and gorgeous. His inner beasts say Rayne is their mate, but he realizes he must track down his dark, forgotten past if he hopes to have a future with her.

However, when the auction house falls, they open a whole new can of worms. War is coming. Separated, they must figure out what they can do to stop this, and hope the other can forgive them for the choices they’re forced to make.

When Rayne and Arvik meet on the battlefield, can they overcome their differences and work together to stop the evil, or will this war engulf the magical world?

Dire Wolf Wanted is a complete story with an HEA and no cliffhanger, but your reading experience will be enhanced if you’ve read Shift of Destiny and Heart of a Dire Wolf first.

Dire Wolf Wanted is the fourth book in the Ice Age Shifters series. This time we have another dire wolf as a main character and the other main character is a pretty unique shifter as well, but I am not going to spoil that. Dire Wolf Wanted continues some plot lines from previous book and I think it works best if you read the previous books or at least book 3. I enjoyed reading this book.

The book starts with both main characters undercover in an illegal shifter auction house. Rayne is undercover as a captive shifter there and Arvik is undercover as part of the staff. The story takes a bit to pick up, they both recognize the other is their mate, but don’t know whether to trust them yet. I liked the scene pretty early on where they sort of work together even tough they don’t fully trust another. Once they break free of the auction house they have even more challenges. A war is coming to the new sanctuary town up north and they might be the only ones to stop it.

This was such an eventful read, there is so much that happens in this books and I liked how it picked up and continued plot lines from the previous books. On the other hand at items it felt like there was almost too much happening in one book. There is the auction plot line with which we start, that then gets parked for a long bit with only a mention about it at the end, so I am assuming the next book will continue that again. Then the plot line about the the sanctuary town where book 3 ended was were I had expected this one to take over, but that plot line only gets picked up halfway through this book and then takes up most of the focus. I liked that part more than the auction house plot line.

The pacing could feel a bit off and there are a few times tings get summarized and half skipped over, which didn’t always work as well. It got me out of the story a few times. As those scenes lacked the emotional impact and when the summaries took place over a long period of time it felt a bit like a sum up of events instead of seeing them play out.

What I did like was how strongly this one tied in with the previous book. There is the auction plot line again even with the same auction house. The female main character in this one is the sister of the one in book 3. And they visit the snowy sanctuary town in this book too. The main characters from book 2 also make an appearance. And the reveal form the end of book 3 plays a role here too. I also liked seeing Lerro again.

The part about Arvik’s people was fascinating and I wish that could’ve been explored even more as I really liked leaning more about their culture and the songs and their history. And it was great to see the role Arvik took in this.

With how story focused this book was with everything that’s happening I found at times we don’t get to explore the main characters as much as I would like. And while the romance is still a big part, I felt that it was less developed than in the previous book, even tough this book was longer. Having said that I did really like Rayne and Arvik and that’s part of the reason I wanted to see more of them. They both work as agents and had their fair share of troubles, but also have playful and compassionate side. They find it hard to trust each other, but eventually decide to let the other in. I was happy when Arvik decide to be honest with Rayne and open up. That was a great scene. I also liked Arvik’s house where they stayed for a while. They made for a great couple, but I just would’ve liked a bit more about them together.

To summarize: This was another great read in this series. This book is quite eventful and story driven with lot of things happening. I liked how plot lines that got started in previous books were continued here and previous main characters make an appearance. The pacing did feel a bit off at times and the summary parts got me out of the story and lacked the emotional touch they could have because the events were summarized instead of played out. I also had a bit of trouble remembering who was who from the side characters as there are so many of them and we hardly know anything about them, with the exception of recurring characters. I did like Rayne and Arvik, they were great to read about and made for a great couple. I would’ve liked to read a bit more about them and their romance. The part about Arvik’s people was one of my favorite parts, it was interesting to learn more about these people and their culture with the songs.