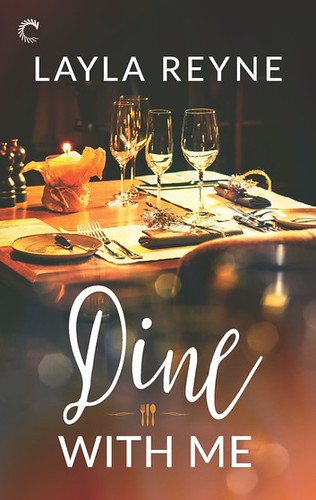 Dine With Me
by Layla Reyne

Miller Sykes’s meteoric rise to award-winning chef is the stuff of culinary dreams, but it’s all crashing down around him. He’s been given a diagnosis that could cost him something even more precious than his life: his sense of taste. Rather than risk the very thing that defines him, Miller embarks on a last tour of his favorite meals while he still can.

But there’s a catch: he needs a financial backer to make it happen, and he doesn’t want anyone to know he’s sick.

Dr. Clancy Rhodes has two weeks to come to terms with putting aside oncology to work at his father’s thriving plastic surgery practice. When the opportunity to travel with a Michelin-starred chef presents itself, the foodie in him can’t believe it. It doesn’t hurt that Miller’s rugged good looks are exactly Clancy’s cup of joe.

As Clancy and Miller travel from coast to coast and indulge in everything from dive bars to the most decadent of culinary experiences, they’re suddenly sharing a lot more than delicious meals. Sparks fly as they bond over their love of flavors and the pressures of great expectations. But when Miller’s health takes a turn for the worse, Clancy must convince him he’s more—so much more—than just his taste buds. And that together, they can win a battle that once seemed hopeless.

One-click with confidence. This title is part of the Carina Press Romance Promise : all the romance you’re looking for with an HEA/HFN. It’s a promise!

This book is approximately 69,000 words

Once I saw Dine With me on Netgalley my interest was piqued, then I read the blurb and started doubting as it sounded like a tough read with the cancer topic and sad too. In the end my curiosity won out and the fact that Carina Press promises a HEA or HFN, so I knew it would have some sort of happy ending. Even though for a long time I couldn’t see what or how that ending would come to pass.

I really enjoyed Dine With Me. It’s well written and I liked how the story progressed. I loved the focus on food and dining and reading about all the dishes they eat, even though unlike both main main characters I am a picky eater and wouldn’t eat half or more of the things they ate in this book. It was fun to travel to all these different places and restaurants and read about everything they see, do and eat.

I had expected this to be a bit of a sad and dark book. And while there were parts of that were, it also wasn’t as depressing in tone as I would’ve liked. Having said that, the cancer was a constant shadow, a dark cloud. There were happy moments, but there always was that shadow, that hint of darkness and sadness. So on the one hand I was happy it wasn’t as sad as I had hoped, at the same time I would’ve liked to see some more scenes without that shadow of the cancer as it also never was as happy and uplifting as I would’ve liked, except for the last chapter.

And at the same time, it almost felt like the book didn’t go as deep as it could’ve gone with the cancer. You don’t read as much about Miller’s doubt as decision or tackle the question of if it’s worth living without his taste and who is without that. You don’t see as much about Clancy’s struggle with what he wants to do and the expectations people have. Maybe I was just preparing for the worst, but I felt like it could’ve gone even deeper into all those topics. And actually I am happy it didn’t go as deep as now the topics were addressed and the implications were there, but it also wasn’t as dark as it could’ve been. It was a nice balance the book had.

The book has an awesome epilogue, I loved seeing the life they build and how everything turned out. It does skip over a whole lot though and I almost felt like I missed part by not having seen that part of the journey and on the other hand thought the skip was perfect as we still get the feel of what happened in those three years, but not all the details.

I liked both Clancy and Miller. They both have their dreams and hopes and both have suffered on the wight of expectations, going along with them even though it might not be what they wanted. And along the way they realize what it is they want. I liked how they both loved food. It was interesting to see how Clancy loved being a doctor and he sounds like the perfect type of doctor who really cares about his patients, although he see very little of him actually doctoring, there are a lot of little touches in his behavior. With Miller his love of food was everywhere, but also a sense of stubbornness and also loyalty to his friends that was everywhere. Seeing his through Clancy’s eyes really gives a good image for the type of person he is. And while Miller might be down and sad at times, Clancy always was this ray of brightness, it was exactly what Miller needed.

I really liked the romance, it build at a good pace. There was an instant attraction, but it takes a while before either acts on it. I liked seeing them bond over food and how they slowly grow closer. The book is full of scenes where you see these two connect and only has two sex scenes later on in the book. It’s low on the drama, which I liked. The romance does progress fast in actual time, but it never feels that way when reading it. These two were great together and I enjoyed reading about them.

It also has some great side characters that show up now and then, even though the focus stays on the tow main characters. Both main characters have incredible supportive and caring families and friends around them, which was great to see. I really liked seeing Miller’s friendship with Sloane, they had a beautiful friendship and it was great to see how close they were and when you learn a piece of their past it all makes more sense.

To summarize: I really enjoyed reading this book and definitely plan to read more books by this author. It was well written and even with the heavy topic the book still feels pretty light most of the time. Although there is an ever persistent shadow over everything and I would’ve liked a few scenes without the shadow. Clancy and Miller are both great main characters and I feel like they really came to life. I enjoyed seeing their romance build slowly throughout this book. These two were great for each other. The epilogue was an awesome wrap up for this book. I also enjoyed the focus of food that this book had. There is a great cast of side characters too and I liked how supportive everyone was. All in all this was a great romantic read with a focus on food and it deals with a difficult topic.

What is one of your favorite dishes to eat?

8 responses to “Review: Dine With Me by Layla Reyne”