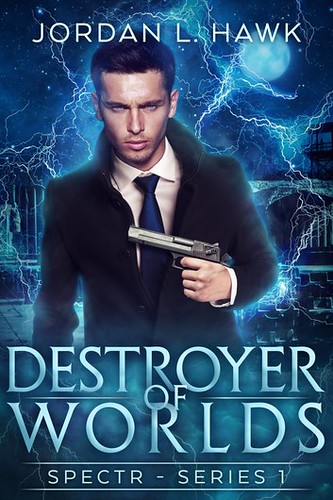 Blurb:
After becoming possessed by the vampire spirit Gray, telekinetic Caleb Jansen thought his situation couldn’t get any worse. But that was before Graham Forsyth, head of SPECTR’s sinister Research Division, took him into custody.

Forsyth claims he can exorcise Gray before the forty-day time limit runs out. But once at RD, Caleb and Gray find themselves ensnared in a web of lies. What is the truth behind the tests Forsyth is performing on them? What does the agency really plan to do with Gray? And most worrisome of all, why does Gray sense demons within the walls of RD’s compound?

Caleb’s boyfriend, SPECTR agent John Starkweather, has suspicions of his own. With the help of his friend Sean and a shadowy organization known only by their symbol of a moth, John intends to save Caleb and Gray at any cost.

But when divided loyalties threaten his last chance at exorcism, Caleb discovers love may come at a price higher than he’d ever imagined.

After finishing the previous book in the series I didn’t wait long to dive into the next one. The last book ended with a bit of a cliffhanger that had me eager to see how the story continued. This book was one of the best in the series so far. It was interesting to see the characters deal with the situation they’re in and there are some great reveals, twists and turns in this one. It was great seeing everything develop in this book.

This feels like a an important book for the series. There are some reveals that change some things big time. And I like how there are some hints looking back that foreshadow these events. The characters land in some difficult situations in this one and it was great to see how they deal with everything and got out of it. Even with how powerful Gray was there were still situations that made me wonder how he would handle it.

There is some good character and relationship development in this one. From Caleb and Gray and how they interact and get a better understanding of the other. To seeing more of Gray and his wishes and desires in this one. To John and Caleb’s relationship, they had some troubles in the previous book and it was great seeing in this book how they got through it and cleared up some misunderstandings. And then there is the whole situation between John and Gray. I had my guesses due to some hints where that would go and it was great to see that finally happen. As well as something with Gray that I had expected would happen, but it was still great to see how the event actually unfolded. I can’t wait to see what the next book brings after all these changes.

I really like seeing how the romance develops throughout this series. There are obstacles they have to overcome and difficult situations, but it’s clear they all care about each other a lot. It’s also interesting with the whole Gray being in Caleb’s body as well, which sure makes for an interesting aspect to a romance. Just as the previous books this book also has one steamy scene.

There are some pieces of information about SPECTR, another organization as well as the non human entities and Gray that we learn about in this book. And I like how we learn more about the world in each book.

To summarize: This was a great book, one of my favorites in the series so far. There are some big reveals, twists and turns. There are some interesting developments character and romance wise as well. This was an awesome read altogether and I liked seeing how everything played and how the characters got themselves out of some sticky situations. There are some great development surrounding Gray and I like how we learn more of him in each book. This book really tests the characters in some ways and most of the main character have some big decisions to make in this book. The world also comes more alive with each book. I look forward to reading the next one!

4 responses to “Review: Destroyer of World by Jordan L. Hawk”