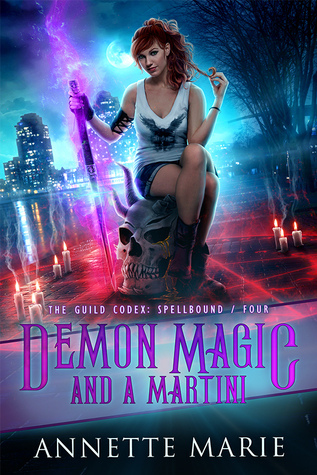 Demon Magic and a Martini (The Guild Codex: Spellbound #4)
by Annette Marie

Blurb:
When I first landed a bartending job at the local guild, I didn’t know a thing about magic. These days, I’m practically an expert on the different magical classes, but there’s one nobody ever talks about: Demonica.

Turns out they have a good reason for that.

My guild is strictly hellion-free, but some people will risk life and soul to control the biggest bullies on the mythic playground. And now a demon has been loosed in the city.

My three best friends are determined to slay it, but even badass combat mages are critically out-magicked. And that’s not all. The monster they’re tracking–it’s not hiding. It’s not fleeing. It’s not leaving a trail of corpses everywhere it goes.

The demon is hunting too. And in a city full of mythics, it’s searching for deadlier prey.

If we can’t unravel the demon’s sinister motivations, more innocent people will die, but finding the answers means digging into dark secrets … and learning truths I never wanted to know.

This series just keeps getting better and better. Demon Magic and a Martini was such an exciting read and an important one for the series so far. It’s action packed, there’s character development and secrets come to light. It was awesome.

In Demon Magic and a Martini we get to learn more about the demon magic in this world. A demon is loose in the city and all the guild work together to stop this demon. But demons are hard to kill, so it’s pretty dangerous. And ofcourse Tori someone gets in the middle of all this. There is plenty of action, magic and some big focus on the characters too.

This was a very exciting and interesting read. There are some big reveals and secrets that come to light in this book. From book 1 I’ve been curious about Ezra and his secrets, it’s been clear that he has some big secrets, from the scars on his face to some mysterious powers he has and in this book we’re finding out pieces of it. It was awesome to find out some of the secrets he has hiding and learn more about his character. And the way it’s build-up toward the reveal was done well too. It starts with little hints and when I was pretty sure I knew what was going on with Ezra we slowly start finding out the truth.

It really felt like an important book for the series, things take a turn for the worse, big secrets come to light and Tori has a decision to make, which will impact what happens next. And even with everything we find out even more questions pop up and I am so curious to learn more in future books. I also liked how Tori really doesn’t want to know the truth in a sense and how it actually made for an interesting situation. No one is telling her things, but she isn’t asking for them either for a long time. There is an interesting bit of character development for her there too. And things touch upon her own issues and troubles a bit too.

I liked how the three mages get develop more in this book, Aaron, Kai and Ezra’s personalities seem to get fleshed out a bit more and also their bond and the strength of their friendship really shows here. I really liked seeing how they have each other’s back and how far that goes. And we also see how Tori fits in this.

There are some hints of a possible future romance in this book as Tori starts feeling some more attraction for one of the guys and I am curious to see if that will turn into more in future books.

It’s also an important book in terms of world building as demon magic or the demonica class is not something we heard a lot about in previous books and this book is all about it. There is a lot we learn about demons, how they’re summoned, different types of demons and their powers that sort of thing. It was really interesting to see that class get some attention and also still get to see enough about the other classes too. One of my favorite things in this series is still how Tori as a regular human is part of this whole magical community and I liked how in this book we see more of how she is fitting it and holding her own.

To summarize: This was such an exciting and engaging read. There are some big things happening in this book and it was packed with action, tension and some big reveals. It was a hard book to put down as I just wanted to keep reading and find out more. There is some great character development going on in this book and I enjoyed seeing how Tori and the three mages dealt with everything that comes their way in this book. It was great to learn some of the secrets the character were keeping and it really put things in a different perspective. I liked seeing more of the three mages and also how strong their friendship is, which is something you really see in this book. I like the little bit of possible romance hint we get in this book as Tori starts developing some more feelings for one of the guys. It’s an important book in terms of world building as we learn more about the demonica class, which was interesting. And I love reading about Tori and seeing how she fits in this all. All in all this was an awesome read and I can’t wait to read what happens next!

What’s the last book you read that had demons in it?

6 responses to “Review: Demon Magic and a Martini by Annette Marie”