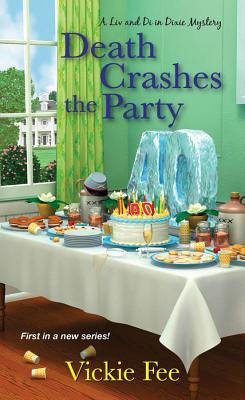 Blurb:
In the quirky, close-knit town of Dixie, Tennessee, party planner Liv McKay has a knack for throwing Southern-style soirées, from diamonds-and-denim to black tie affairs, and her best friend Di Souther mixes a mean daiquiri. While planning a Moonshine and Magnolias bash for high maintenance clients, Liv inconveniently discovers a corpse in the freezer and turns her attention from fabulous fêtes to finding a murderer. Together, Liv and Di follow a trail of sinister secrets in their sweet little town that leads them from drug smugglers to a Civil War battlefield, and just when they think they’re whistling Dixie, Liv and Di will find themselves squarely in the crosshairs of the least likely killer of all. . .

Death Crashes the Party is the first book in a new series that follows the adventures of Liv and Di who live in the town Dixie. I liked this book, but at the same time it also didn’t really impress me. Enough was happening to keep my attention, but it also felt like I was making progress very slowly and it took me so long to finish this book.

The mystery was interesting and I liked the mix between what Liv and Di uncovered and how the police also did their part of the investigation. It all worked pretty well and was quite realistic in my opinion. On the other hand part of the mystery was a bit predictable, one of the people who I suspected at first turned out to be the murdered, but there was also a nice twist as well. The ending felt a bit too rushed to fully appreciate it though, it just felt it all got wrapped up a bit too fast suddenly. And there was a classic bad guy tells the main characters everything scene. I just wished they had put more pieces together themselves as when we finally have the conclusion it made me wonder why they didn’t found out any of that and only other tiny pieces.

Also the title is a bit misleading, yes there is a party, but the death bodies aren’t found at the party. And I was a bit disappointed by that to be honest, as I kinda liked the plot idea of finding a death body during a party. Also I would’ve liked to see more about the party planning business. There are quite some sub plot lines, some about Liv her party business, Di her budding romance with Dave, Liv her family, Liv her house and some plot lines related to the mystery. So there was enough going on, it just felt a bit off at times.

The main character is Olivia or Liv, who owns her own party business and get’s quite the scare when she finds two death bodies while visiting two clients while planning their party. I liked Liv, although even after reading the whole book I still don’t feel like I really know her. Her best friend Di is one of the more important side characters and I liked how open and honest Liv was with Di. Overall I thought Liv was a nice enough character, I just felt like I never really connected with her and she does her fair share of less smart things in this book as well.

Beside the few main characters there is a big cast of characters, most of whom play a minor part and at times I had trouble remembering who was who. Most side character we learn a bit about and while they do bring the town alive. I would’ve liked getting more of a feel for some of the characters.

This book takes a slightly different approach to the romance as most cozy mysteries books. Namely Olivia is already married, so no budding romance here. I quite liked reading about a married couple for nice, but sadly I didn’t really feel their connection. They seem pretty normal, but there wasn’t really any spark. I did like how they cared about each other and had these little gestures that they did care, I just had hoped for a bit more. And I only realized she was married after the first few chapters, although that might’ve been an error on my part as I had assumed she was single, until we met her husband for the first time. Also for some reason I really dislike the name Larry Joe, not sure why, but it really rubbed me wrong.

To summarize: Death Crashes the Party is a story driven book that follow Liv and Di who try to help the police uncover the mystery of the murders of two brothers. Overall it was a nice read, but it failed to really impress me. There is enough going to keep my attention, but at the same time it felt like I was slowly crawling through the book. The mystery was interesting, a tad predictable and realistically done. I liked how Liv and Di where part of the investigation, but also let the police do their job. The end felt a bit rushed and I had wished they had put more pieces together before the bad guy explained everything. I liked the main characters, although I would’ve liked getting to know them even better. There are a lot of side characters and at times it has hard to keep rack of everyone. It was interesting to read about a married couple for a chance, but I didn’t really felt the romance. And for some reason the name Larry Joe bothered me. The party business from Liv was a nice addition, although it stayed pretty much on the background.

Tell me about a book you read that had a married couple in them?

16 responses to “Review: Death Crashes the Party by Vickie Fee”