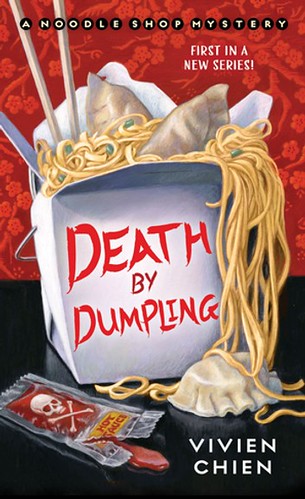 Death by Dumpling (A Noodle Shop Mystery #1)
by Vivien Chien

Blurb:
Welcome to the Ho-Lee Noodle House, where the Chinese food is to die for. . .

The last place Lana Lee thought she would ever end up is back at her family’s restaurant. But after a brutal break-up and a dramatic workplace walk-out, she figures that a return to the Cleveland area to help wait tables is her best option for putting her life back together. Even if that means having to put up with her mother, who is dead-set on finding her a husband.

Lana’s love life soon becomes yesterday’s news once the restaurant’s property manager, Mr. Feng, turns up dead―after a delivery of shrimp dumplings from Ho-Lee. But how could this have happened when everyone on staff knew about Mr. Feng’s severe, life-threatening shellfish allergy? Now, with the whole restaurant under suspicion for murder and the local media in a feeding frenzy―to say nothing of the gorgeous police detective who keeps turning up for take-out―it’s up to Lana to find out who is behind Feng’s killer order. . . before her own number is up.

I liked the idea of a murder mystery set around a Noodle Shop. I like original themes for cozies and a noodle shop wasn’t something I had read about before. So I curiously started this series. The mystery is well done, the Asian theme was interesting, but something was missing to fully pull me in.

The mystery was probably my favorite part of this book. It was quite well done, although I have some minor issues with the mystery too. I thought it was interesting and there were lots of possible suspects and possible motivates. Lots of options, but nothing conclusive for a long time and also not many suspects that get crossed of the list early on. It does take some time for the investigation to really get somewhere. With many suspects and few solid leads, it feels like it’s standing still for a bit. There are some interesting hints and tidbits that Lana learns and then once things really start rolling it becomes quite interesting.

It did feel like the pacing was a bit off with the mystery, with it going slow at first and then once they find an important lead, things suddenly go a lot faster. It also was hard to piece some things together with vague hints. Like a certain picture they see, but we as the reader can’t so it’s hard to start puzzling from that. Or partial hints we get, but nothing solid and they lack impact without that. And then there are a few hints that aren’t quite what they seem, which was interesting. Then toward the end things suddenly goes a lot faster and the wrap up felt almost rushed. Looking back after I finished the book it surprised me that two big questions or possible clues weren’t investigated much as it felt clear that they could’ve been important. I wasn’t surprised at the murderer, although the motive was something that got unraveled quite late. The police does seem to work on the case and follow the same leads as the main character, but at the same time they didn’t really seem that capable.

Even tough the mystery was interesting enough for some reason this book didn’t fully catch my attention. Something about it was just missing to really pull me in. Maybe it’s also because I didn’t read long periods of time at once, so it felt like the pace was slow. Everything was good enough, but never quite reached that level of great or kept me fully engaged.

This story is told from the point of view of Lana, when she and her friend Peter get accused of murder she decides to help investigate. I liked her dog Kikkoman and her best friend Megan, but would’ve liked to see a bit more of the dog. Megan actually helps her with the investigation and I liked how they seemed good friends, but also could disagree on things. Lana was nice enough, but I never fully warmed up to her. I just wanted something more about her that made her likable or interesting. Now most of what she did was what other characters called moping around the house or she was investigating the murder. There were some scenes in the restaurant, but not many, more to show that she worked, than that I really got a feel for how her job was. I also never really got the feeling whether she was happy or not with her life and job. It just was.

I liked the setting with the Asian Plaza and the multitude of Asian stores that are there and the people who work there. While there are a bunch of characters, there weren’t many that were really interesting or likable enough to make me want to read more about them.

There is a bit of potential romance or even a love triangle. I have to admit the romance didn’t work for me at all. The detective was handsome, but that’s about all we know about him. I didn’t feel any spark or connection between him and Lana. I also have read so many books with the detective as love interest that it just isn’t as interesting of a set-up unless its really well done. And Ian just felt a bit like a creep with how he kept asking her out. And I wish Lana would’ve been honest enough to him and just say what she thought.

To summarize: this book has an interesting theme set around a noodle store in an Asian plaza. The mystery is quite interesting, with plenty of suspects and motives. The pacing is a bit off at times, but parts that felt slow and then things speeding up toward the end. It was interesting to find out some secrets and while I wasn’t surprised at the murderer I hadn’t thought of that motive yet, but it made sense. The story is told from Lana’s point of view, while nice enough I didn’t really find her that likable or interesting. There are plenty of side characters, but again most weren’t really likable or interesting enough that I wanted more. there is a bit of set-up for a potential romance. The detective seems the most likely candidate, but besides him being handsome I didn’t feel like we really get to know much about him and I didn’t really feel their connection. All in all this was a decent read with a nice mystery, but I don’t think I’ll be continuing the series.

8 responses to “Review: Death by Dumpling by Vivien Chien”