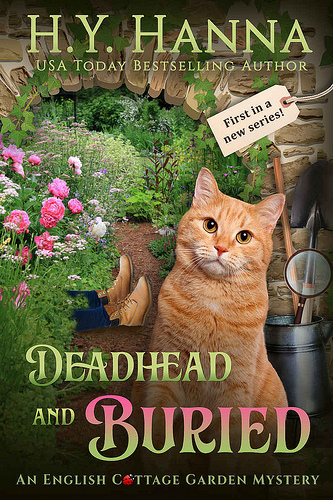 Blurb:
A new British cozy mystery series from USA Today bestselling author H.Y. Hanna!
City girl Poppy desperately wants to pay off her debts, quit her dead-end job, find her father… oh, and keep a plant alive. But she knows these are just hopeless dreams—until the day the letter arrives. Suddenly, Poppy is on a train heading deep into the English countryside, to collect a mysterious inheritance. And the last thing she expects to receive is a cottage garden nursery—complete with romantic climbing roses, fragrant herbs, a ginger cat with attitude… and a dead body.
Now she must solve the mystery or risk losing her new home and the chance for a fresh start. But who would want to murder a gardener in a sleepy little village? Could the reclusive inventor have something to do with the killing? What about the brooding crime author next door? And why is her long-lost cousin so desperate for her to sell the cottage?
Poppy might not know her pansies from her petunias but that doesn’t stop her digging for clues. The only problem is, she could be digging her own grave too…

I was so excited to hear about this new series by HY Hanna and hoped it would be just as good as her other series. Deadhead and Buried was such a fun read, the mystery was well done, the theme was fun and there are a lot of fun and quirky characters. It’s an awesome start to this new series and I am looking forward to see where this series goes next.

Deeadhead and Buried starts with main character Poppy having a bad day on her job, her boss doesn’t treat her well and she’s not enjoying her work. Luckily for Poppy thing are about to change for her. A letter comes informing her that she has inherited her grandmother’s cottage. She jumps on the train to check it out, planning to sell it and use the money to follow her dreams, but then she finds a body in the garden and she finds herself in the middle of a murder mystery. And slowly falling in love with the lovely cottage and garden.

The mystery was well done, while it starts a bit later in the book as there is a bit of introduction first, it was still worked out very well. I liked trying to figure out who was the murderer and I liked the reveal when we find out who did it. I hadn’t expects that person to be the murderer and I liked being surprised. It did make sense, even tough there are only a few hints in that direction, but mostly it’s that I didn’t realize those things were clues, it’s great when things fall on it’s place and how much sense it makes. There are enough suspects and not many clues at first, which made for an interesting situation. It also felt realistic how Poppy slowly got into solving the mystery, she just wanted to figure things out and defend her new friend and slowly ends up solving it when she finds the right clue.

I liked Poppy, she seemed friendly and curious. Her situation is so typical for a cozy mystery with an inheritance sending her on a different road, but the way the plot was worked out still made it feel fresh. Poppy was a likable main character who just want to follow her dreams and get out of her dreary job and I love seeing her find her place. I admit I am not a fan of the plot lines where a character is set on selling a place, while you know they’re going to stay. But as here the focus wasn’t too much on it and it got resolved by the end of the book I didn’t mind as much and it did make sense that Poppy was planning to sell it first. I liked following Poppy’s story and seeing her grow attached to the town, cottage and people here.

There is a great cast of quirky side characters, from the elusive crime author to the quirky elderly inventor who lives next door. Then there is an orange tom cat called Oren and a terrier. And there is the friendly lawyer who helps her out, her rude cousin, some friendly villagers and a female detective who seems to know what she is doing. And there is even a potential love interest for Poppy, but we’ll see how that goes in future books. I liked getting to know these side characters a bit and I am looking forward to see more of them in future books.

I also liked the gardening/ plant theme, it’s infused in the book with enough about the plants and gardening, but also done in a way that makes sense. I don’t know as much about plants, but I do like plants and enjoyed reading about them. I also think it’s quite the unique theme for a cozie as I can’t remember seeing too many books with a similar theme. It’s also clear the author knows her plants with the many plant names and also the bits of information dropped throughout the book.

To summarize: Deadhead and Buried is an awesome start to this new series. Poppy is a fun main character and I was happy to see her luck turn around and see her slowly find her place in this new town and the cottage she inherited. The mystery was well done, it kept me guessing and surprised me with the murderer, but there are enough clues that looking back it makes sense. There is a fun cast of interesting and quirky side characters, among which an elderly inventor, a reclusive crime author and an orange tom cat and a terrier. The gardening and plant theme was a fun touch and well done. The author seems to know a lot about plants with the plant names and bits of information dropped throughout the book. All in all I had a lot of fun reading this one and can’t wait for book 2!

What’s your favorite plan or flower?

6 responses to “Review: Deadhead and Buried by H.Y. Hanna”