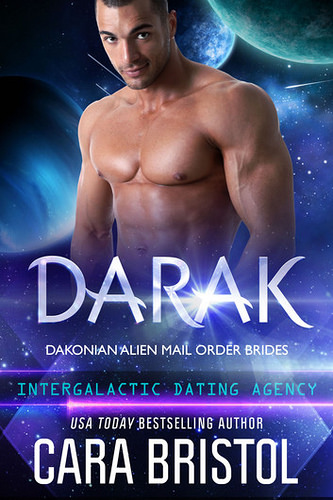 Free-spirited pastry chef Lexi Sutterman has discovered that true love is pie in the sky. The only thing more difficult than finding an Earth man willing to commit is pleasing her wealthy, hypercritical family who view her as a failure. So she’s given up on both, focusing her energy on her new bakery. Now that her uber successful little sister manages to nab a well-heeled fiancé, Lexi fights back by joining the Intergalactic Dating Agency. She plans to bring a huge, purple, tentacled alien as her plus-one to the wedding.

Darak of planet Dakon isn’t purple or tentacled—he’s just seven feet of horned alien hotness. To get a woman on his world, a guy has to literally win the lottery. Tired of waiting for the Fates to send him a female, he joins the dating service to meet a nice Earth girl to call his own. He recognizes Lexi as his true mate, but realizes convincing her they’re meant to be together forever and not just a weekend will be no cake walk.

But when a sweet-tart pastry chef and a horned alien hottie fall in love, everyone might get their just desserts…

* * * *
DARAK: Dakonian Alien Mail Order Brides is a new science fiction romance series and a spin-off from the author’s Alien Mate series. In the Alien Mate books, Earth women travel to planet Dakon to become the mail order brides of aliens.
In the Dakonian Alien Mail Order Brides series, the aliens get tired of waiting for their ship bringing women to come in, so they join the Intergalactic Dating Agency and go to Earth.

I had read the first book in this author’s Alien Mate series and I was curious about this spin-off series where the aliens come to Earth instead. So I decided to buy a copy of Darak. Darak was a fun read, I especially enjoyed the first date scene and seeing how Darak reacted to this new world. Lexi wants revenge on her mother and decides to sign-up for the Intergalactic Dating Agency and get matched with Darak, who signed-up as there aren’t many females on his planet.

While I had only read the first book in the Alien Mate series of which this is a spin-off, I was hoping this series could work as a standalone. After reading it I can say I think it works great as standalone, so you don’t have to read the Alien Mate series first to understand this one. There are a few short references to characters in the first series and the program with Earth where they send Dakon females, but that’s about it. I think reading all or some of Alien Mate series first mostly helps to understand more about the Dakon home world as in this book we don’t get as good of as feel for it as the story doens’t take place there.

My favorite part of this book were the first few chapters that took place around their first meeting. I liked how new everything was for Darak and while he learned a few things about Earth, there are also things he doesn’t know yet, which led to some funny scenes. There were some great scenes, like with the cheese. And it was fun to see him experience Earth. I also liked seeing the difference in how their species think, Dakonian’s live a lot simpler and I liked how simple and clear cut some things were for Darak.

After the first date scene there is a bit of a time skip and I didn’t care as much for the scenes around the wedding of Lexi’s sister. And for some reason the story didn’t keep my attention as much in that part. Lexi seemed to change her mind about Darak pretty sudden and the romance developed quite quickly. I wouldn’t liked a few more dating scenes and seeing Darak experience Earth. There were some nice scenes surrounding the wedding of Lexi’s sister and I liked the direction the story took.

Lexi and Darak both seemed nice enough characters. With the short length of the book it was hard to get to know them as much as I would’ve liked, but there’s still enough to have a decent feel for their personalities. They did seem like a great couple and I liked seeing them together, I just would’ve liked a bit more build-up for their romance as things developed pretty quickly now. I also liked how Lexi was a pastry chef and had her own cupcake store. It wasn’t a big part of the story, but I did like it. I also liked how Lexi felt bad for the reason she signed up to the dating agency, but in the end it did turn out well.

This book is the type of science fiction book book that place only on Earth, but it involves aliens. There isn’t as much world building as Earth is still pretty similar to how it is now, with a few changes and additions like the Intergalactic Dating Agency about which we read a bit. I think this works great here and it was great to see the aliens coming to Earth now and how that worked.

To summarize: Darak was a fun read. There are some fun scenes as Darak doesn’t fully understand Earth customs yet. He knows Lexi is his mate from the moment they meet, which has a bit of a fated mates feel. Lexi isn’t sure yet, but quickly falls for the alien. I liked the chapters surrounding their first date the best. After that I wasn’t pulled as strongly in the story and I cared less about the scenes surrounding Lexi’s sisters wedding, but there were some nice parts there too. The book was a bit on the short side and I would’ve liked a bit more build-up for the romance and seeing more of the characters. I did like the characters and the romance, just would’ve liked a bit more. If you’re looking for a fun romantic read with a bit of sci-fi, you might enjoy this one.

Tell me about a fun book you read recently?