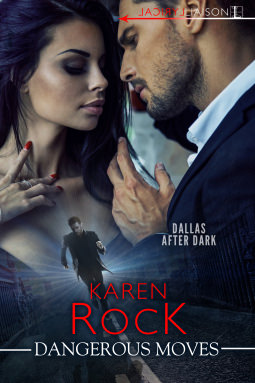 Blurb:
Pounding music. Sculpted men. And a conspiracy that could cost far more than a few dollar bills . . .

Detective Blake Knight has been undercover before. But an assignment to bust a steroid ring running out of Dallas’s elite male strip club means his new cover will be nothing but his own taut muscles and oiled skin. It’s one thing for the tough, by-the-books agent to take down bad guys with his gun. Facing a rowdy crowd in only a G-string is another story . . . especially in front of his new boss, gorgeous, mysterious Reese Landon.

Her father’s club and shady business practices bring back terrible memories for Reese. But when he’s shot and goes into a coma, she vows to protect him the way he never did for her. That means keeping the police at a distance—especially sexy, driven Detective Knight. If she has to give him a cover job, it would be a crime not to put that glorious ass on stage. But no matter how good he looks in a Velcro uniform, she can’t trust him, or give into the undeniable heat between them. They’re both chasing the truth. And it might expose more than either wants to show . . .

Dangerous Moves is the first book in Karen Rock’s new romantic suspense series. I’ve read almost all of Karen Rock’s books so far and really like her writing. So I jumped on the chance to get an advance copy of this one. It is a great start of this new series, it has some steamy romance, danger, suspense and a bit of mystery all rolled into a great read.

The story follows Detective Blake Knight, who has to finish a case to get his long sought after promotion. He has to find out who is behind a steroids ring in Dallas. Reese returns to Dallas after her father is shot. There is a connection with Blake’s case and he goes undercover in the club her father owns as male dancer to uncover the truth.

There is an instant attraction between Blake and Reese, even tough they don’t know if they can trust each other at first. I liked how their romance was steamy, but it actually took a while before it really heated up. Which gave them time to get to know each other a bit better. But only toward the end of the book do they really open their hearts to each other.

It made for an interesting plot with how Reese and Blake didn’t trust each other at first and are sort of on opposite sides. We get both their point of views, but there are a lot of questions and things we don’t know. Blake sees Reese as a potential suspect and wonders if her father is involved. Reese defends her father and hopes her return to Dallas gives them a chance at reconciliation. But she knows some things don’t add up in her fathers records and is afraid how he is tied into this.

I liked the suspense plot of this book and how both characters were involved/ connected to the case. There are some scenes filled with danger and tension. It kept me wondering who was involved in this case, how Reese’s father tied into this all and how they would discover the truth. And there are some answers they can only get once Reese’s father wakes up, if he does. In the end I predicted two important people involved in the case, but that’s mostly due to well done foreshadowing and some well placed hints that allowed me to put things together. But it was still great to see them figure it out and resolve things.

I liked how Reese could hold her own, but at the same time it did make me a tad uncomfortable how she got involved in some scenes as she wasn’t trained for this like Blake was. But she does have an original perspective and sheds some different light on things. And it was neat how they both tied to this case and how that connection allowed them to get closer.

Both Reese and Blake are great characters. I liked how different they were, but also how they had things in common. Reese left Dallas years ago after a traumatic experience and only returns once her father is shot and lands in a coma. She has changed since then and is ready to face her old fears, but part of those fears are still there. I like how she had her strengths, but also still had some doubts. She also kept some things from Blake, but while on the one hand that bothered me I also felt like it made sense as they weren’t sure for a long time how much they could trust the other.

Reese sees things in shades of gray, while for Blake the world is black and white. I liked seeing when his conviction got challenged and when he eventually was forced to open his eyes and realize things weren’t as black and white as he thought. I also liked how he slowly finds himself in this book and how some long lasted fears and worries are finally put to rest. I liked how he was protective of Reese, but also valued her insights and her initiative.

The first meeting between these two already has some heat and their attraction is obvious, but there’s a lot between them before they can give into it. And when they do the sparks fly. There is mostly heat when they finally get closer, but then that slowly morphs into more. I loved seeing how they finally open themselves to more and trust the other. And there are some touching scenes later on. Like when they finally admit their fears to each other and fully trust each other with the things they know. The conflict between them was well done too, it made sense they didn’t fully trust each other. And while there is a scene that causes some doubts between them toward the end, I am glad it didn’t blow up as much as I feared. And I liked how things were resolved at the end.

To summarize: this was a great read and a good start this this new romantic suspense series. There is a good suspense plot line that kept me wondering. There is some well done foreshadowing that allowed me to predict two of the people involved in the case, but it was still great to see how the characters pieced things together. They have an immediate attraction to each other, but seem to be on opposites sides. I liked seeing them grow closer and then give in to the attraction between them. And eventually that attraction turns into more and I loved seeing when they open up to each other and start the trust the other. Both characters are great to read about. They are quite different from each other and have some differing points of view as well, which made for some interesting scenes. But they also fit so well together. All in all this book had a good mix between romance and suspense and I can’t wait to see what the next book will bring.

What was your last romantic suspense read?