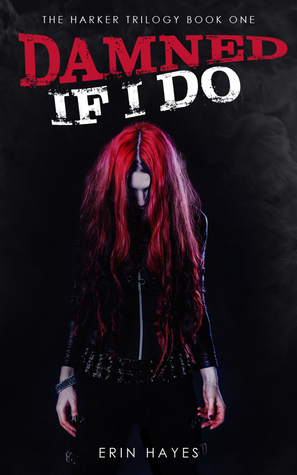 Damned if I Do (The Harker Trilogy #1)
by Erin Hayes

Blurb:
They killed my sister and infected me.
Now I have to pick up the pieces before I die.

I’ve spent the last five months trying to find the bastard who did this. Yet, even with the help of a hot amnesiac vampire named Jude, I’ve had zero luck.

Until now. And it could change everything. Even though I grew up in a family that hunted the supernatural, there were still things I didn’t believe in.

Now I have to hurry for the slim chance that I could save us all. Because when you fight against immortal vampires, you’re the one who’s running out of time.

With the dark creepy cover, this wouldn’t be a book I would normally pick up, but as I read another book by this author and the blurb sounded interested I decided to give it a try. This book definitely surprised me in the best possible way. I enjoyed it from the beginning till the end. Damned if I Do is fast paced, filled with action, interesting story line, creepy vampires and kickass vampire hunters. There are interesting characters and side characters who all have their own agenda. This book captured my attention and I was so sad when I read the last page as I can’t wait to read what happens next.

This book has a dark and gritty feel that really fits the story. Bad things happen, people die and get hurt, but those who are left standing are still fighting for a better tomorrow. The prologue gives a view of what happened 5 months before the start of the story when Edie her sister dies, it’s pretty horrifying, but it really hit home the danger of the vampires and how gruel they could be. Edie is infected and being a Harker vampire hunter that means a slow and painful death, the only thing she wants is to make sure her little niece won’t be afraid for the vampire who murdered Edie her sister. So she’s hunting the vampire who did that and sort of looking for a cure, although that isn’t Edie her focus. And later on in the story it all makes sense why Edie her sister was killed and Edie infected and I liked how all things made sense and everyone had their own agenda and motives. It made the villain more interesting and maybe even more creepy and scary too as he knew what he wanted and planned for it.

The ending of this book was really well done, I knew something was up, but I wasn’t sure what. And then when things start rolling and the truth comes to light I was really surprised. There sure are some surprising revelations, especially the one in the last chapter took me by surprise. There also was one twist a bit earlier that I had expected as I’ve seen that in a few other books, but I still think it was well done. There was a bit of an horrifying scene towards the end, actually two of them and I felt a bit shocked and sorry for Edie, but it did make sense even though I thought it was pretty gruesome.

Edie is an interesting main character, she really has her heart on the right place and she fights for others first without thinking about herself at times. She really goes through a hard time and I was happy there were some people there ot help her as she really needed people who looked out for her. Carl is her cousin and he’s a great guy, he wants to help, even though Edie is reluctant to let him do that as she doesn’t want to bring him in danger. Edie her aunt is reading through books searching for a cure. Then there is Jude who is a vampire with memory loss, there are some hints to his pasts, but he doesn’t remember anything. We also get some chapters from his point of view, which I liked. He truly cares about Edie and I thought they made a nice couple. Then there are a few other interesting characters they meet along the way and at times it’s hard to know who they can trust and who not. There are a few scenes involved Edie her niece Amelia and her brother in law and it just broke my heart how they had to live without Edie her sister. The scenes with Amelia were a bit lighter than the rest of the book, but also illustrated how much their family had been through and lost and it was just so sad.

There is a bit of romance, even though it isn’t the focus, I still liked how it was present. It was interwoven into the story, with now and then a scene that focussed on it a bit more. I liked the romance and how they are an unlikely combination, but it works. Edie and Jude are great together. There romance did develop a bit quickly, but given the circumstances I think that was logical. And they already have known each other for 5 months. I also liked how there wasn’t too much drama and they got together in the first book already. I am looking forward how their relationship will progress.

The world building was done quite well, we get a good idea of what goes bump in the night and who fights against them. There are vampires and vampire hunter and we learn about them both. From Jude his point of view we see a bit more from the vampire side of things, how they live and how they get their blood. I liked that not all vampires are evil, but it depends on the person. there’s also some lore later on about how they came into existence which was quite original ad interesting twist. They can’t stand sunlight and need blood to survive, so they stay true to most of the normal ideas about a vampire. Then there are the vampire hunters who hunt vampires, but usually only those who are a danger to society and hunt humans. The Harker family is a special vampire hunter as the strongest/ oldest of their family has special powers and can summon a sword from their hand. There is also a few more paranormal elements, involving ghosts and how Edie can use some powers like setting fire to things or moving things with her mind. It was very well done and I really liked how Erin Hayes built this world. If you are looking for a well written vampire book I would recommend this one!

To summarize: Damned if I Do is a great start of this series, fast paced and filled with action. Once I started reading I didn’t want to stop and the story kept my attention from start to finish. There were a few interesting twists and surprises. The world is dark and gritty, but there is some hope too. I liked Edie and there are some interesting side characters as well, although it was hard to know who was trustworthy and who not. The romance developed a bit too quickly, but it was well done and I thought they made a nice couple. The world building with the vampires and vampire hunters was very well done and I liked how not all vampires were evil, but it depended on the individual vampire. There’s an original twist about the origin of the vampires as well. I can’t wait to see how this series continues!

Other books I read and reviewed by this author:
– Erin Hayes – How to be a Mermaid – 4 stars

18 responses to “Review: Damned if I Do by Erin Hayes”