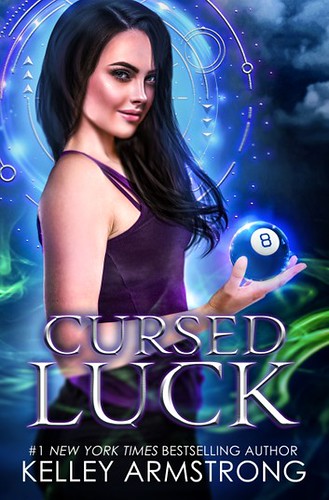 Blurb:
Kennedy Bennett comes from a long line of curse weavers. For centuries, her family has plied their trade in Unstable, Massachusetts, an unconventional small town that’s welcomed paranormal practitioners since the dawn of spiritualism. Kennedy has recently struck out on her own, opening an antiques shop in Boston, where her speciality is uncursing and reselling hexed objects.

Then Aiden Connolly walks into her life with an offer she really should refuse. The scion of a wealthy family of luck workers, Aiden has a scheme to get his hands on the most famous cursed object of all: the mythical Necklace of Harmonia. He’s not the only one after the necklace, though. And he’s not the only one looking for a curse weaver to fix it. Kennedy’s sisters are kidnapped, and she finds herself plunged into the underbelly of the magical world where even Aiden is in over his head.

Once I heard about this book I knew I had to read it. Not only is Kelley Armstrong one of my favorite authors, but the concept for this series with the unusual paranormal powers just sounded so fun. And that’s exactly what this book was. It was an engaging and fun read. I liked main character Kennedy and following her along as she gets involved in this big thing surrounding a famous cursed necklace.

At first I wasn’t quite sure where the story would go and it’s a story with plenty of twists and turns. One of the bigger twists doesn’t occur till later and I liked how it painted everything in a different light. It all made sense too, which I like with twists like this. While I wasn’t a fan of how Kennedy got involved in the whole thing with the necklace, I really liked seeing how it all played out. I also liked how caring she was about her sisters and her hometown sounds lovely too.

I liked the characters in this one. Kennedy was a great main character. I like how close she is to her sisters, but also how she’s trying to find her own place. I like how she could be a bit impulsive at times, but was aware of that and still made smart decisions. She’s clearly willing to fight for what she cares about and also stands her ground when she wants something.

There’s also a slow burn romance in this book which was well done. I liked how it develops slowly. The two start out not liking eahc other, but once some things get cleared up they grow closer and I liked seeing them work together. They made for a great team and I liked those little scenes where you realize how much they trust one another. The romance is a side plot line tough and while it ends on a hopeful note it’s not resolved, which I thought worked well here and I hope to see more of it in future books. I am still not sure if future books will follow Kennedy again or maybe her sisters as those all seem interesting as well.

The paranormal aspect was pretty important to the plot, but in most scenes not as present. In most cases I thought that worked here, although I would’ve loved to see more about the paranormal powers. The curse weaving and luck working all sounds so fascinating and I would’ve loved to see more of that. The scenes where we see more of the powers were some of favorites. I did like the whole idea behind these powers and also how it all plays out with the balance as well. I liked the world building and the paranormal aspect and I cna’t wait to spend some more time in this world.

To summarize: This was a great start to a new series. I liked the idea of the unique paranormal powers like curse weaving and luck working. The plot surrounding the cursed necklace was interesting and I liked the twists and turns along the way. And the way one of the bigger later twist made a lot of sense and put things in a new perspective. Kennedy was a likable main character and I liked reading about her. There’s a great slow burn romance as well. The world building was interesting and I liked learning more about the different powers and also how they needed to balance things out. I look forward to the next book!