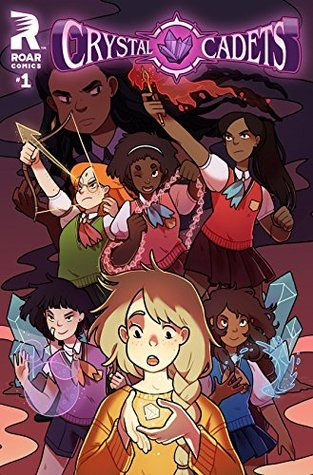 Blurb:
Zoe is a shy girl, struggling to fit in at her new school, when she finds a mysterious gem left to her by her birth mother. All of a sudden, darkness-spewing dragons are chasing her down in the schoolyard, and a squad of crystal-wielding girls is there to save her! What does this mean for Zoe? Find out in the all-new Crystal Cadets #1

Crystal Cadets is a fun and cute graphic novel aimed at a Middle Grade audience, but as an adult I enjoyed it as well. It has beautiful colourful artwork and it was a fun and quick read. On the other hand I also felt it fell a bit flat, some scenes felt a bit rushed or the pace or time jumps could be a bit jarring. The story was entertaining, but it stayed a bit shallow and lacked depth. I wanted more out of it.

The story follows Zoe, she’s a bit shy and get’s bullied then some exchange students save her and once she get’s home she learns she’s adopted and get’s a letter and a crystal from her mom. Then she finds out there is the darkness and the crystal cadets has to fight it. They rush off in search of other cadets and fight enemies. The concept was fun. There are girls with different powers, who all have a crystal that gives them powers and they search for the few missing cadets, while battling evil.

The artwork was pretty. The colours where bright and the I enjoyed watching the story play out. I did have some trouble following the right order at times as I am more used to reading manga’s, which go from right to left instead of left to right. In the are there were a few uncoloured pages and that made me realize how much the colour added to artwork. The colours definitely made everything come more alive and brought colour and life to the pages.

The magical powers thing was fun, but never really got explained. They have crystals, but some have elemental powers, the other has arrows and Zoe has crystal dust. It just seemed a bit random. And then they all had a big pet like familiar. The world building didn’t seem to make much sense and nothing got explained. We get a bit of background about the crystal cadets and how the powers get passed down, but that’s about it. Then the whole concept of the darkness stayed really vague and to me it just didn’t fully make sense. It also seemed weird they had to fight the darkness, while it was also mentioned they couldn’t really fight it unless they eliminated the source, which wasn’t something they could destroy with their powers, so why are they fighting it? It also seemed like a convenient way to have something dark and evil for them to fight against, without it really making sense or having an explanation or goal.

To summarize: Crystal cadets was a fun graphic novel, but it didn’t hook me enough to really get invested in the characters, story or world building. The artwork was really pretty and colourful and it made the story come alive. The pace felt a bit rushed and jarring at times. I wished there was a bit more explanation and time to get to know the characters. The world building stayed pretty vague and didn’t make much sense, especially the whole darkness thing they where fighting. I did enjoy it, but I am not sure if I will continue the series.