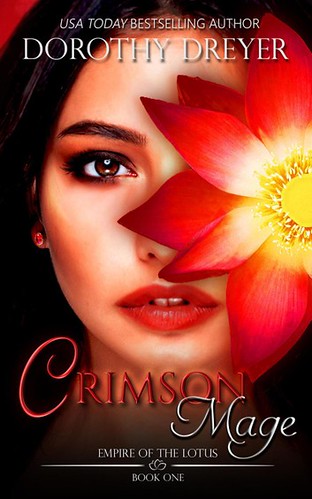 Crimson Mage (Empire of the Lotus #1)
by Dorothy Dreyer

Blurb:
Upon the one hundredth reincarnation of the Lotus empress, the dark god Kashmeru would send out his shadow army — Pishacha — to destroy the reborn empress, which in turn would bring about the collapse of the universe.

The world changed at the time of the Eradication. The New Asian Administration outlawed mages, forbidding any use of their powers. To protect her imprisoned family, Mayhara Guatama made a deal to surrender her mage status and pledge her life to the New Order.

Years have passed, the chaos from the upheaval long since settled. Or so Mayhara believed… until she receives a mysterious message pleading for her help.

Stunned by the claim that the empress has been reincarnated, Mayhara must choose between fealty to the Lotus empire, or honoring the decree that assured her family’s safety.

I was in the mood for a book with some magic and then I remember buying the box set with the first four books in this series and decided to pick it up. I had fun reading this book. It’s a straightforward fast paced story set in an unique world.

Mayhara is the main character in this book. She’s a crimson mage who trained to serve the Lotus empress, but everything changed when the government outlawed mages and put many of them in prison camps. Mayhara is still free, her powers blocked and working in service of this regime. Her life changes again when she hears from her old mentor. The Lotus empress has reborn and they have to keep her safe. Most of this story is about Mayhara and her friend Jae as they try to find the empress and keep her safe.

The story is fast paced, with not a dull moment. Every time something doesn’t go according to plan they find a new clue to follow. This keeps the plot moving and it was an engaging read. The plot is pretty straightforward, but I think that works here. It’s easy to follow and root for the characters to achieve their goals.

This book is very plot focused so there is less time to really get to know the characters deeply, having said that I did like Mayhara. She seems like a likable character who cared about serving the empress and willing to do a lot to fulfill this task. She seemed capable and smart and I liked how she had mage powers, even though she wasn’t the strongest mage when the academy still stood. I like how she’s capable, but also not too special. Jae seems like a nice guy and there’s a hint of romance between the two. Besides that there aren’t as many characters who play a big role, except some of the evil guys and the empress. There are some really short chapters from the empress’ point of view, which add a bit to the story.

I liked the unique world. It’s set in an alternate Asia, that’s has magic as well as some futuristic technology. It also has a bit of a post apocalyptic vibe. It makes for an interesting setting and while there isn’t a lot of focus on the world building, there are little details that give a feel for the world. I liked the magic system with people being a certain type of mage, crimson in the case of Mayhara, and they can do magic based on which type of mage they are. I liked that different types of mages had different powers and we mostly see crimson and sapphire, which helps so you don’t have to remember all the powers that go with a certain type at once.

To summarize: Crimson Mage is a fast paced plot focused book and a great start to this series. I like the fast pace and the way the story keeps moving forward. With the focus on the plot the characters don’t get developed as deeply, but they are still likable. Mayhara is a capable and likable crimson mage and I liked following her around. There is a hint of possible romance. I liked the setting in Asian, but with magic and other technology. There are some details that give a feel for the world and I look forward to continuing the series and learning more.