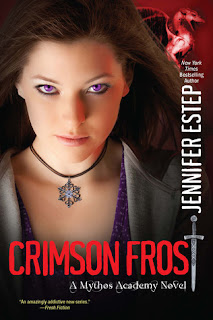 Blurb from Goodreads:For a moment, a face flashed before my eyes—the most hideous face I’d ever seen. No matter how hard I tried to forget what had happened, I saw him everywhere I went. It was Loki—the evil god that I’d helped set free against my will.

I should have known that my first official date with Logan Quinn was destined to end in disaster. If we’d gotten into a swordfight, or been ambushed by Reapers, I’d have been more prepared. But getting arrested mid-sip at the local coffee hangout? I didn’t see that one coming.

I’ve been accused of purposely helping the Reapers free Loki from his prison—and the person leading the charge against me is Linus Quinn, Logan’s dad. The worst part is that pretty much everyone at Mythos Academy thinks I’m guilty. If I’m going to get out of this mess alive, I’ll have to do it myself…

My Review:
Crimson frost is the best book in this series so far and I think this series get’s better with each book. After the events at the end of last book I had no idea what to expect from this book. It was a really enjoyable read, with again lost of action and I feel like Gwen get’s stronger in each book.

The story starts off right in the middle of a scene and quite soon lots of things are happening. The story is fast paced and filled with action.Even though the story is predictable at times I really enjoyed reading it. I just wanted to keep on reading to know what would happen next. So much happens in this book. I really liked the ending and can’t wait to read the next book.

I did have a few issues with some plot lines. Like a certain group that should be honest and balanced, but ended up doing some stupid things like there weren’t even thinking or listening at all. Also some characters seem a bit too easy to kill and other too difficult.

The characters develop some more in this book. I did think there was too less romance int his book. Gwen develops some more and seems to get stronger each book. We are also introduced to some new characters. We didn’t see much from Daphne and Caston in this book, the focus was mostly on Gwen and the side characters played a smaller part.

The world building mostly builds on what is already knows. Adding knowledge of some artifacts mostly. Most of the world is already know at this time, but small pieces are added.

To conclude: a very enjoyable book, this series get’s better whith each book. The story is a bit predictable and there were some plot lines I didn’t like. Most of the focus was on Gwen in this book and less on the side characters.