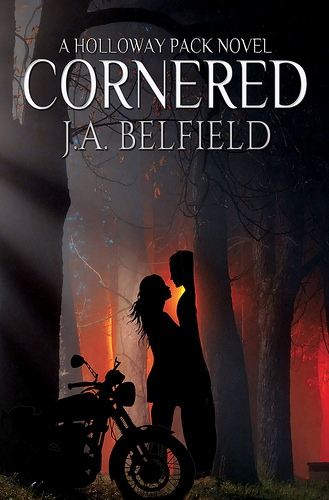 Blurb:
Daniel Larsen is playing a dangerous game, and he doesn’t even know it.

A two-wheeled speedster. A little redhead in a bar. Evenings spent away from his pack. Innocent enough for most, but for Danny, the combination leads down a path of destruction and straight to a hell he doesn’t even see coming.

Entangled in a nightmare that started with his own brother and the cat he brought into their home, Dan’s driving himself toward a solitary existence—except for the curvaceous Olivia Fanella. Seduced by his new companion, and happy to ignore the divide growing between himself and the pack, Danny is oblivious to the trap being laid out for him.

On top of that, just when he believes life might be going a little better, he gets served the roughest shot he could never have imagined—not even in his worst nightmares—and Danny has no idea how to come back from a hit like that.

**Cornered contains scenes that some readers might find upsetting**

It’s been a long time since I read the previous book in this series, but I still easily slipped back into this series. There was enough recap of important plot points where necessary to remind me of what happened. I really enjoyed reading Cornered, the pace was a bit slow at times, but not in a bad way and it was well written and kept my attention. It was so nice to be back into this world again. I liked how we get the sense of community with the pack and continuity through hints of what happened in previous books and knowing more about most of the side characters thanks to knowing their backstory. Although if you want to you could read this one as standalone you just would get the hint to their pasts less and know less about the side characters.

Cornered is Daniel or Danny his story. Daniel gets into a lot of trouble in this book and I really felt sorry for him. It was a bit frustrating sometimes how he got treated like a kid and I know what he did was stupid and dangerous for the pack, but it still felt like the others were a bit too harsh on him. And yes Daniel makes his share of not so smart decisions as well in this book, but not all of what happened to him was his fault. There were a few small things that didn’t fully make sense, some small plot holes or decisions that just didn’t seem right. No one was concerned when something happened to Daniel that no one could explain, although he never divulged everything to the pack I still felt it was strange they didn’t make a bigger deal out of it, until it was too late. And a few decisions and actions at the end felt a bit off to me.

It starts of with focus on Daniel his life, his evenings spent away form the pack due to his issues with Brook and Kyle. I thought Daniel could’ve been more forgiving of them and didn’t judge them so harshly, but it did make sense how he was hurt and now had trouble dealing with things. The story focused on how he gets into trouble, deals with the pack situation and interacts with Liv.

Only around the 60-70% mark the paranormal aspect got more attention when they land in some supernatural problems. There’s a nasty villain in this book, who is pure evil and crazy. Also how did she time things so perfectly and twisted things while things didn’t went to her plan, it just seemed like it went a bit too smoothly. I also never fully understood why she did some of the earlier things in the book and what her goal was with that. The reason just didn’t seem clear to me and never gets fully explained.

And there is this scene, the one the blurb has a trigger warning for and yes that warning is totally justified in my opinion. That scene enough would’ve been enough for me to DNF a book if I wasn’t that invested and far into the book by then and had enjoyed it up to that point. Because really the scene was that horrifying I wish I hadn’t read it. Even skimming over it, I still got to many details and it was way too disturbing for my taste and I also don’t get why it had to be in the book. Part of it felt like it was a bit rushed and could’ve used a bit more fleshing out the details and on the other hand it already was way too dark and disturbing for me, so I was glad it didn’t last longer. So yes that part I definitely didn’t like. And what happened next was a bit anti climactic in my opinion, part of it seemed to get fixed too easily and the other part was done realistically, but we still don’t fully see it through. On the other hand I did like where the book ended, while at the same time I would’ve liked a bit more story too and see what would happen next.

Daniel is an interesting main character and I liked following his story. I liked getting to know him a bit more as I don’t remember much details about him from the previous books, but that also could be because I read those so long ago. He has some trouble with Kyle and his mate and often escaped the house for that reason. I do think that Daniel basically got a lot of bad luck in this book, yes he makes some bad decisions, but mostly the things that happened aren’t fully his fault and it just felt like the author put him through a bit too much. It was interesting to see how the pack reacted to what happened and dealt with his behavior and how his time away from the pack gave him the opportunity to meet Liv. This book mostly focuses on Daniel and his story, although we do see the previous main characters and side characters as well, which was fun.

Daniel his relationship with Liv was one of the parts I liked most. I liked the slow build-up and how they just interacted with each other without acting on it at first. I liked their casual sort of meetings at the bar and seeing how it developed into more. There was a stage that felt like it went a bit fast, but that’s probably just me. I thought they were a great couple, although I had hoped to learn a bit more about Olivia. And there’s one sex scene which lasted almost a whole chapter, definitely impressive how the author wrote that one. Although I did cringe a bit at the fact his brothers were so close by, they never talked about protection or cleaned up in the middle of the multiple rounds. I liked that there was little drama in their relationship, and the drama that wast here felt realistic and not there just for the sake of it. There’s also a scene at the end, which got solved pretty nicely. And I liked how it was realistic, but still little drama got involved and I really respected Liv for what she did there and how she handled things.

The book doesn’t add much in terms of world building. In fact it’s pretty light on actual paranormal scenes. There’s only one shifting scene and besides that it is more about the implications of being a werewolf than them actually shifting into one. I do think it worked though and since a recent dolphin shifter series I read that handled the paranormal aspect in this way I have come to appreciate this way of handling the paranormal aspect more. I wasn’t a fan of the paranormal trouble they run into at the end as it didn’t feel fleshed out enough. I do like how we see how much being a werewolf changes their normal lives and how they live.

To summarize: I really enjoyed this book. It’s one of those series that seems to get better with each book. I liked the writing style and the pace was done nicely if a bit slow at times, but not in a bad way. I did feel a bit sorry for Daniel in this book as a lot of bad things happen to him and I thought the pack treater him a bit harshly at times especially as most of it wasn’t completely his fault. Daniel does make a few not so smart decisions that land him in trouble. There is one very disturbing scene towards the end, with way too many details for me and even while skimming it was too much for me. It’s a good thing I was already committed to finishing the book by then and had enjoyed it so far. I liked getting to know more about Daniel in this book and seeing his relationship with Liv progress. There’s little drama and I respected Liv for how she handled things. There’s also one impressively long sex scene. I just had hoped to see more of how things go next, but at the same time the ending was well done. There isn’t as much focus on the paranormal aspect, but I did like how it was handled. It mostly focuses on the effect of being werewolf while in their human body as opposed to actual shifting. I wasn’t a fan of the supernatural problems they run into towards the end as it felt a bit rushed and bad decisions are made, and only added to more bad stuff happening to Daniel. Overall this is a great series and I enjoyed this latest instalment!

Tell me about a series you enjoy that seems to get better with each book?