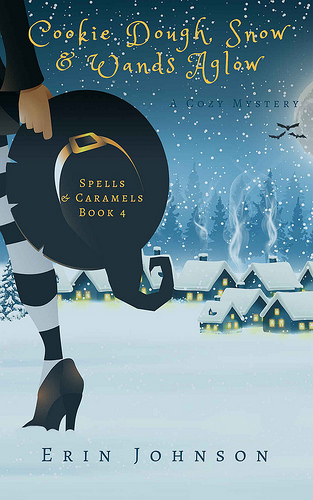 On the snowy road to the Earth Kingdom for the holidays, Imogen and the bakers are ambushed by Horace, villainous leader of the Badlands Army. They’re forced to detour to an idyllic, rural village, bedecked in lights, garlands and winter cheer…all a little too perfect to believe. At least that’s so for Imogen, who’s seeing burned out buildings and mysterious memorials that no one else seems to notice.

Hank’s royal presence gets them invited to the big bash at the governor’s mansion. The night is filled with dancing, stolen kisses under the mistletoe and fun, until a guest is found dead in the cauldron of punch.

As bodies and mysteries pile up, all the evidence points to the vampire Francis as the culprit. The gang must come together to clear their friend’s name and save themselves from the angry villagers. Even worse, Imogen struggles with having to keep her relationship with Hank hidden, while working with him to find the real killer.

As Imogen unearths more than a few town secrets, she finally solves the riddles of her past and discovers the truth of Horace’s pursuit of her. But will all the secrets be unraveled in time to stop the killer, or will Imogen and her friends suffer a monstrous fate?

My Review:
This is such a great series! I bought this book as soon as it released and luckily could fit it into my reading schedule soon. I really like the blend of paranormal elements and cozy mystery. This might be one of my favorite books in the series so far. The small town with the winter weather and a winter holiday they celebrate was fun to read about, the mystery was a good one and there are some great revelations in this book. I can’t wait to see how those events impact the rest of the series.

Imogen and her friends are on their way to London, when Horace makes sure they have to detour. They end up in a small village just when they are about to celebrate a winter holiday named Bruma. The village seems almost too perfect. And then a murder shakes up the village. I liked the mystery parts, not only the murder, but also the strange things Imogen is noticing and it was exciting to see how it all tied together. While I wasn’t too surprised at who the murderer was, I was surprised by some of the other revelations at the end of the book.

At the end of this book there are some pretty big revelations that I think will have a big impact on Imogen. I loved when everything came to light and it all made sense. It was really well written and I liked how the previous few books have been slowly building up toward it. While each book has their own mystery, there is a slowly continuing storyline throughout the series, which is something I love when cozy mysteries do that. There was something that bothered me a bit from the start of the book, but at the end it all made sense.

This series has a great group of characters. Imogen has a tight group of friends around her and I love seeing how they handle everything thrown their way. There are some developments again surrounding Imogen and her magic in this book. The romance also progresses a bit and some things come to light that feel important. I liked that Imogen and Hank got to spend some more time together in this book as they are away from the water kingdom.

And all the side characters are fun to read about. From Imogen’s best friend Maple, to snake shifter Sam, the flame Iggy, Seer Rhonda and vampire Francis who all play a role in this story as well. I think it’s great Imogen has such a great group of friends. And I like how they all have their scenes and moments to shine in this book as well. It also was fun to read about maple’s love triangle and how things change there as well in each book, although I am pretty sure I know who she will choose in the end.

I feel like this book is an important one in terms of world building as there are some important pieces we learn about the magical world, magic and some more specific things. I also like the descriptions of magic in the book, like the ice cubes for the punch and how these people use magic.

To summarize: this was another great book in this lovely paranormal cozy mystery series! In this book the characters have to stay in a small village during winter and celebrate a winter holiday. The mystery was good in this book, I wasn’t too surprised by who the murderer was, but I did really like the other revelations that took me by surprise. I feel like this book is an important one in terms of the revelations that contribute to the storyline that continues throughout this series and what they add to the world building. I really like reading about Imogen and the great group of friends she has around her. There are some developments surrounding Imogen and her romance progresses a bit as well. This was a great read and I am looking forward to the next book!

What was the last book you read that took place during winter?