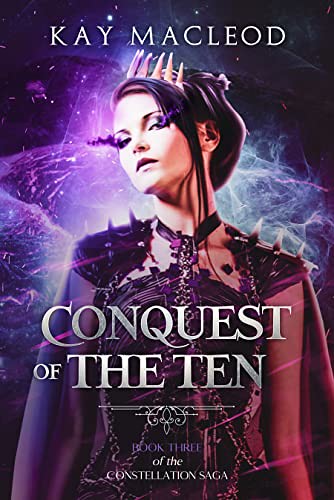 Conquest of The Ten (The Constellation Saga #3)
by Kay MacLeod

Blurb:
It’s too late. The enemy has already won.

After tearing through the barrier between worlds, The Ten are now free to consume everything the Constellations vowed to protect. Kitty and her friends must overcome the despair of their defeat and drive back the invading forces. The hunt is on.

But the Tenebri generals are more terrifying than anything they’ve faced. How do you conquer nightmares and dread?

Damien, bitter with the loss of his mother, home, and familiars, travels with the new Astronomer to search for a way to end the conflict. Straddling the border between two lives gives him a unique perspective. One that may get him killed by either side.

I love this series and was excited to dive back into it with another book. Conquest of The Ten continues the story of the constellations and their fight against the Tenebri who want to take over their world. I like how long these books are as that means more time spent with this story. This book kept my attention throughout and I really enjoyed it.

At the end of book 2 the constellations try to stop the Tenebri from invading their world, they fail and some of them get through including the fearsome Ten, the strongest of them. Now they have find them and prevent them from wrecking havoc in their world. I thought it made for an interesting plot twist how they suffered a setback and how the strongest of the Tenebri are now in their world. The group splits up for a big part of this book and goes into two different directions. At the end they come together again.

This book is told mostly from Kitty’s point of view who belongs to one of the groups and Damien who is in the other group. There are a few chapters from other characters. I thought that worked well. Although I wasn’t a fan of how most chapters ended with a sort of reveal, twist or small cliffhanger and then switched to the other point of view. Usually those little reveals at the end of a chapter have the effect to keep my reading, but here they made for a convenient stop point with the switch in point of view. I was happy when later on it happened more often to have multiple chapters from the same point of view in a row before switching to the other. I liked both point of view characters and I like how different they are and have their own struggles to overcome in this book.

I liked reading about the Constellations and the challenges they face in this book. The story was engaging, although there were a few parts that were a bit less engaging to me and felt a bit slower. There are plenty of twists and turns and I liked seeing where the plot goes. There is some character development too especially where it concerns the two main point of view characters, Kitty and Damien. I liked seeing how Kitty and Archer’s relationship progresses and how they deal with it in this book. I like them together. Damien also has some of his own romance struggles and I liked how that got resolved.

There is a big group of characters in this series, but as everyone has their own personality it is easy to keep them apart, although at the start it did take me a few chapters to get back into the story and remember who everyone was. I liked seeing what happened to all the side characters and there are some great developments there as well. Malik is one of my favorites and I also liked seeing how Lucian dealt with the things that came his way. There’s a new animal for Damien to bond with who was interesting. I also liked seeing Leo grow into his powers and learn more about him. I liked how Mimi really seemed to retain her empathy and wary of killing when not necessary, she also shows her emotions more openly than most. I like River and some of the deeper conversations she has with Damien in this book.

There are some interesting and creepy enemies they face in this book. I also wasn’t a fan of one of the powers of the villains, but I did like how the constellations found a way to deal with it. Each of the battles really are a struggle. There is a big battle at the end as well and some surprising things that came out of it, which makes me excited for the next book.

To summarize: This was an exciting third book in the series. I liked seeing where the plot goes and following Kitty and Damien’s point of views. The group splits up into two groups for most of this book and the chapters switch back and forth. There are some interesting developments in this book and some twists and turns. There are some achievements they make and some losses they lead. I like reading about both Kitty and Damien and seeing how they deal with the things they encounter in this book. Most of the side characters are interesting and likable as well and I enjoy reading about them. There is plenty of action and some powerful enemies they have to fight. The ending had some interesting developments and I look forward to the next book.

2 responses to “Review: Conquest of The Ten by Kay MacLeod”