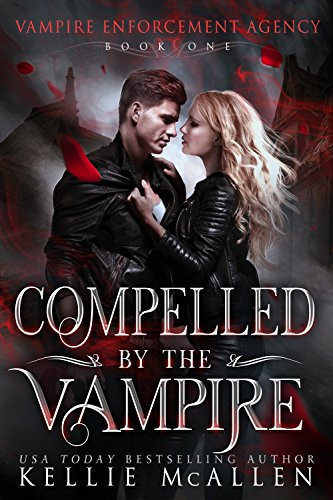 Compelled By The Vampire (Vampire Enforcement Agency #1)
by Kellie McAllen

Blurb:
How do you survive when you become the one thing you despise?

It’s vamps like Roric who make humans believe vampires have a right to live in human society. He doesn’t drink from humans, he’s never even taken a vein, and the idea of infecting a human is abhorrent to him. As leader of the Vampire Enforcement Agency, his job is to find and capture the vamps who betray humans’ recently-earned trust. Until one human woman tempts him to break all the rules.

When Roric intercepts a rogue vamp attack and finds Caroline dying, he can’t resist her blood or beauty, and in a moment of passion he does the unthinkable. But Caroline despises the monsters who killed her parents, and she’d rather die than be a vampire.

With vamp attacks at an all-time high and Caroline resisting Roric at every turn, his job, his family, even his life is at risk. Worse, Caroline’s attacker wants her just as bad as Roric does, and he knows Roric’s secret. Roric will do anything to earn Caroline’s trust, but can he keep her safe long enough to convince her that life as a vampire isn’t a death sentence?

If you like sexy, thrilling paranormal romance/urban fantasy stories by authors like JR Ward, Bella Forrest, and IT Lucas, you’ll love Compelled by the Vampire.

This PNR/UF series is appropriate for ages 18+.

I have to admit I am not a big reader of vampire books, I do pick them up now and then, but they’re not really my favorite paranormal creature. And the biggest reason I requested this one is because I really enjoyed this author’s book before. I am glad I decided to give it a try as I really enjoyed this one. I like how the author gave some unique tweaks on the genre, but also stayed true to most expectations when it comes to vampires.

This book follows the story of Caroline. Caroline hates vampires ever since one killed her parents. When a vampire comes in the bar she works, she ends up leaving early from work. Not much later she ends up being turned into a vampire. And that’s basically where this book is about, Caroline turning into the creature she despises and leaning how to deal with that and being a vampire.

I liked how this book gave a good feel for how difficult this change was for Caroline. We get a flashback and understand why she hates vampires as much and now she becomes one of them and that’s hard for her. I did like she didn’t give up and tried adjusting to her new life. Although she was a tad too stubborn at times. She didn’t want to let go of the life she had, but I thought she should cut herself some slack and adjust to her new reality first. She also was a bit too harsh to Roric at times, although I did sort of understand that as she hates vampires and he is the one who changed her into one. But she could go from hot to cold and back sometimes.

Then there is Roric. I have to admit I didn’t like him as much at first. He turns Caroline without asking her first because he can’t resist her and that didn’t sit well with me. After a while it does become clear he’s a good guy, but it still bothered me a bit what he did. I do feel that how he gave in to temptation made him feel a bit more realistic as besides that he is a bit too perfect. I also thought it was a tad creepy how strongly he became to care about Caroline from the moment he met here. On the other hand I did like how much he cared and how mostly he was just a nice guy. He is there for Caroline and helps her along the way and there’s some mutual attraction there as well. For Roric it’s a bit easier to fall for her, except that Caroline has the power to destroy his career. Caroline has to get over the fact that he’s a vampire first and has to realize that not all vampires are the monsters she thought they were.

There is some strong romantic undercurrents here. Roric and Caroline have to figure some things out before they really get close, but there’s still a bunch of sexual tension in this book. Blood drinking is basically an erotic act and the book start by him turning her buy feeding her his blood, so you can see how that starts their relationship off on a hot note. And they both keep thinking about drinking from the other. I did like their romance, although I wouldn’t have minded a bit more bonding and seeing them get closer and get to know each other, but I am hoping we’ll get that over the course of the series. This book already has some steamy parts in this book, but I felt like that fit the tone of the book. There also is a romance between two of the side characters with some hot parts. Not sure yet what to think of them, but I am curious to see how that continues.

Besides Caroline’s storyline there are some other plot lines as well. Roric and Caroline are the main characters, but we also get the point of views of some other side characters, which provided some interesting other point of views. We get a girl who is fascinated with vampires, which showed nicely how different people looked at vampires. Then we also have Roric’s brother, a friend of Caroline’s and the brother of that friend.

The world building was interesting. I liked how the author gave some tweaks on the standard vampires, but it also still very much felt like your typical vampire too. They drink blood and can’t stand the sun, like in most books. Here vampires can drink from each other for example, which was a fun tweak. There’s also something about vampire mates, but it doesn’t get revealed here how that works completely. There are also some parts about tinted windows, blood clinics and the vampire agency, which makes the world come alive and are all things that make sense in a society where vampires live as well. The vampires are common knowledge in this world.

To summarize: this was a great start to this series. The story follows Caroline who hates vampires and then gets turned by one. I liked Caroline and how she was determined to make the best of the situation and it’s also realistic how she struggles with the change. I did think she was a bit too stubborn at times and was a bit harsh on Roric, but it did make sense why she acted that way. I didn’t like Roric at first as he changes Caroline without her consent, but he did seem like a good guy overall. And I did like how the fact he slipped up made him seem a bit less perfect. The romance starts off with some attraction on both sides and gradually changes into more. There are some steamy parts and I hope there will be some more bonding between these two later in the series. There are also some other point of views, which were interesting and gave us a better insight in some things. The world building was done well, with things like the vampire agency and blood clinics which made sense in a world were vampires are common knowledge. I also liked the author gave her vampires some unique tweaks as well, like the feeding on other vampires and mates. This book also starts a plot line surrounding rogue vampires and I am curious to see how that continues. All in all a great start to this new series and I am excited to see where it goes next.

8 responses to “Review: Compelled by the Vampire by Kellie McAllen”