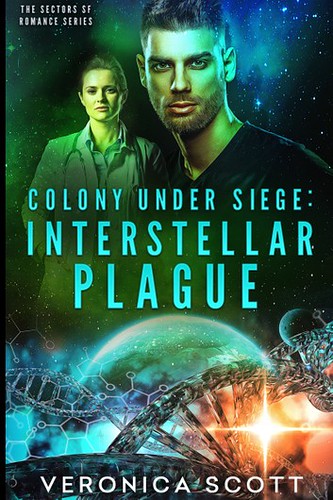 Colony Under Siege: Interstellar Plague (The Sectors)
by Veronica Scott

Blurb:
Newly graduated from a prestigious interstellar medical school, Dr. Saffia Mandell has been assigned to the Haven Two colony on the galaxy’s outer rim as the only doctor for some 2000 human residents. She’s counting the days until her five years there is up, trying to adjust to rural living after life in the crowded Inner Sectors and fighting her attraction to Chief Ranger Micah Navonn. She’s dreading the upcoming tourist season when the rich and pampered will descend on the planet for the scenic wonders and novel sports opportunities and no doubt inundate her little clinic but the colony depends on the seasonal income to survive.

As the senior official for his people, the Calinurra, the indigenous inhabitants of Haven Two, Micah enforces the treaty, regulates the tourist permits, patrols the forests and resists his fascination with Dr. Mandell. He never expected to be involved with a human woman and doesn’t want to believe in the concept of a fated mate. He wants to keep his life simple and isn’t ready for any long term commitment. Besides Saffia keeps proclaiming she’ll be leaving when her appointment is up in four and a half years so why should he risk his heart?

Then a ship arrives unexpectedly carrying a very ill little girl and soon the deadly virus is spreading through Haven Two. The colony authorities are desperate to cover up the problem to preserve the all-important tourist season and Saffia and Micah have to work together to battle the outbreak, the local administration and their undeniable feelings for each other.

Can the colony survive? And will Micah and Saffia be able to move past their fears about entanglements to act on the mutual attraction?

This book got me out of reading slump. I was struggling with finding the right book for my mood and eventually decided to pick up this one as I thought I was in the mood for scifi romance and author I already knew. That turned out to the right decision. This book was exactly the type of read I was looking for and I really enjoyed it.

Interstellar Plague is mainly told from the point of view of Doctor Saffia, she’s assigned to be the doctor of a small colony to pay of her medical school fees. As soon as she’s done with her obligatory 5 years of service she plans to find work in the Inner Sectors. Instead things don’t go according to plan as she meets ranger Micah and their immediate attraction turns into more. And then a virus hits the colony and the doctor has a plague on her hands and not enough resources to fix it.

This was an exciting read. The first part of the book is more focused on the romance while the later half is more focused on the struggles with the virus. This worked out well as by the time to virus was there the couple was already established and could support one another through to troubling times. I wasn’t sure how I would experience reading about a virus like this while we’re still dealing with the Covid-19 virus in real life, but I actually quite enjoyed reading a fictional take on the topic. I thought the way some characters acted was realistic and understandable. There are some sad and slightly gruesome scenes, but there are minimal details, it’s just the situation itself that sad with the virus rampaging through this small colony and so many falling sick or worse.

I liked that most of the chapters were from Saffia’s point of view. I liked her and she made for a great main character. It was nice to have a few chapters of Micah’s point of view, but having his thoughts only here and then made him feel more mysterious and you mainly get to know him through Saffia’s point of view, which I liked. It was great getting to know the characters more and seeing them fall in love. I also like how capable Saffia was in her role as doctor and how she handles the whole situation even tough she has limited resources and things standing in her way. Micah has his own skills and interesting background. I wish we had seen more about his people, the Calinurra, as I really liked the bits we got about that. Luckily there is a second book about this couple, which I already bought, and I hope to see more of Micah’s people in there.

The romance between Saffia and Micah develops quite quickly, but it felt realistic. I liked their connection and the way they interacted. Their attraction and heat is obvious, but so is their respect for one another and the way they understand and care for the other. I like how understanding Micah was about Saffia having her responsibilities as a doctor and how that sometimes would get in the way. And also how Saffia was understanding of Micah’s responsibilities to his people. I liked them together and the epilogue was great too.

I really enjoy this author’s books and seeing more of the Sector’s world in eahc book. The focus on the small colony was interesting as well as the non-human species that live on the planet, the Calinurra. I really got a good feel for how life on this small colony was like and I liked the glimpses and pieces of information we got about the Calinurra. I look forward to returning to Haven Two in book 2.

To summarize: This was a great read. The author strikes the right balance between romance and plot. I liked the setting in the small colony of Haven Two and it was harrowing to see the devastation the virus caused there. It was an exciting read with a great romance and solid plot. I liked following Saffia as she fell in love with Micah and then had to battle an interstellar plague with few resources. There are some sad moments, but I also like the uplifting feel of seeing the virus dealt with and how capable doctor Saffia was. I liked both Saffia and Micah and they made for a great couple. It was fun getting to spend time in the colony of Haven two and getting a feel for how life is there. All in all this was an awesome read and I look forward to book 2!