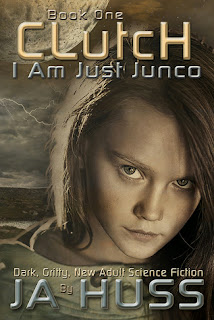 Blurb:
WHO IS JUNCO?
Forget about me.
Because I’m a whole lot of things,
And none of them are good.
But I’ve got a little problem.
My life is a lie.
And everyone wants a piece of me.
So here’s the deal.
And I’m only gonna say this once,
So listen the fuck up.
I’ve had enough.
I’m looking for the truth.
And I’m tired of taking orders.
I’m no one’s soldier.
I’m no one’s project.
I’m no one’s redemption.
I am just Junco.
I am at war.
And everyone is the enemy.

****WARNING – this is the first book in a FIVE BOOK SERIES**** THERE ARE NO ANSWERS IN THIS BOOK. Like None. In fact there are no answers in Books two, three, or four. There are a few in Book four point five, but only if you’re paying very close attention. So if you’re looking for a nice tidy story with sweet characters – you’re gonna want to skip ALL these books.

If on the other hand, you like science fiction, psycho girls with a lot of power, romance without commitment, liars, cheat, and killers… then Junco might be your girl.

How long can you lie to yourself before it all comes apart?

In 2152 the avian race is on Earth looking for something stolen from them decades ago – their genetics. At the center of the search lies the Rural Republic; a small backwards farming country with high hopes of military domination and a penchant for illegal bioengineering.

19 year old Junco Coot is the daughter of the Rural Republic’s ranking commander. She’s the most foul-mouthed, wildly unpredictable and ruthless sniper the Rural Republic has ever trained. But when her father’s death sparks a trip into forbidden places, she triggers events that will change everything she knows to be true.

As an elite avian military officer, Tier’s mission is to destroy the bioengineering projects, kill Commander Coot’s daughter, and return home immediately. There’s just one problem. Junco isn’t who she claims to be.

With no one to trust, not even herself, Junco must confront the secrets of her past and accept her place in the future, or risk losing herself completely

My Review:
I was really looking forward to reading this series, I love JA Huss her contemporary books and this series sounded really good too. So I have managed to read the whole book and I am still not sure what to think of this book and I think I am going to leave it unrated because I have no idea what to rate it. I don’t hate this book, but I don’t like it either. Mostly it was a combination of really confusing, a lot of screaming and figuring out the truth, a lot of action and fighting and also a bit intriguing.

The beginning of this book was so confusing that I was actually wondering if I was really reading the first book in this series. There is no explanation, no setting the scene and then there is The Stag and The Goat and I actually thought she was talking about animals for a while and couldn’t make sense of it. Really who names her car (or at least I assume it was a car or something that serves the same purpose) The Goat? Well Junco apparently.

I knew Junco was going to be a strong willed and fighting main character, but I wasn’t prepared for how she really is. She is impulsive, aggressive and even a bit crazy. She also is a bit trigger happy, but she also her fears, which make her feel a bit more real then she would’ve been without them. I don’t think I like her as a main character, I can’t put my finger excatly on the why, but then again I couldn’t get a good grip on what was going on most of the book.

I did like Tier, he was nice enough and willing to speak the truth and put up with Junco (and if you know Junco, then you know that means a lot). He also had these almost philosophical conversations with Junco sometimes that made me like him. There really aren’t that many other characters that play a big enough part to make me really form an opinion about them. Most characters don’t play a big part or they disapear quikcly or we learn so less about them and then don’t even know if what we learn is the truth.

So from my review you would think I didn’t like this book, but I did manage to finish it. So what kept me reading? Well because of all the confusion I was really interested in hearing some answers and there are some really intriguing parts, like the Avian. I wanted to know more and I hoped this book would provide us with some answers eventually and yes there are some answers, but also a lot more questions and most of the answers or pretend answers don’t really make sense. So this book was intriguing and I did like Tier. Also I wanted to know what’s up with the ever recurring sentence “picture yourself standing on a dock”, really it was used so often that it had to be important, although after a while it also started irritating me. I can practicaly recite the whole paragraph that follows.

I love world building in books and usually sci-fi and fantasy books need a lot of that to make sense. In my opinion this book severely lacked world building. In the beginning I didn’t have an image of the world and that makes it difficult to place the events that are happening. In the end some things about the world is revealed, but not enough to make a clear image in my head or get a good grasp on the world. For me the world was one big mystery and I hate that. I want to know what’s normal, what’s going on and why the world is like it is. There is none of that in this books, only bits and pieces and hints. And while I hope for more world building in the next books I am thinking the world building in future books will be done in the same manner as in this book.

To conclude: this book was confusing me, a lot. I have the feeling even my review is a bit confusing trying to put my thoughts on paper. The book is intruiging, but I still have no idea whether to continue this series or not. I didn’t connect with Junco at all, but I did like Tier. There aren’t enough other characters that play an important part. The world building is done in bits and pieces and never allowed me to get a good grasp on the world. All in all this books just left me confused, but also intrigued and I have no idea whether to continue this series or not. It’s certainly original and interesting, but I am not sure if that’s enough although the next books does sound better than this one.

You can add Clutch to your to-read list on Goodreads

You can grab your free copy of Clutch here:
– Amazon
– B&N
– Kobo