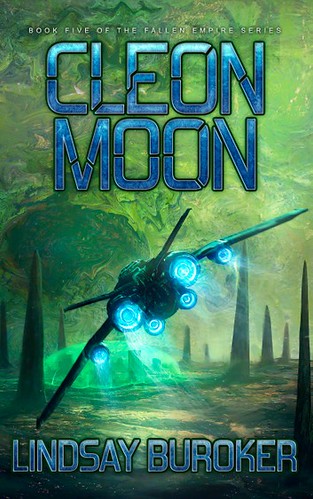 Blurb:
Now that she’s retrieved the Staff of Lore, Captain Alisa Marchenko can finally dedicate herself and her ship to finding her kidnapped daughter. Her scant clues lead her to Cleon Moon.

Unfortunately, since the fall of the empire, mafia clans have taken over the domed cities on the harsh moon, and exploring there isn’t easy. Even with the cyborg Leonidas at her side, Alisa struggles to survive vengeful mafia clans, rogue Starseers, and genetically engineered predators. To further complicate matters, she must worry about the ancient relic hidden on her ship, a beacon to anyone in the system who craves its power. If Alisa can’t navigate the moon’s chaos, she may lose her only chance to catch up with her daughter.

This series continues to be great. I’ve been really enjoying this series so far and so far each book has the same feel and solid enjoyment than the previous books. I like the mix of action, the slowly progressing main plot line, the side plot lines, the interesting characters and the bit of romance.

In Cleon Moon Alisa and her crew follow some sparse clues that lead to maybe Alisa’s daughter and Abelardus’ brother being at the moon. Unfortunately for them the moon holds more danger than expected, not only do they have to find a starseer compound in the unforgiving wilderness, there are also some moon politics, mafia’s and dino’s they have to contest with. There is quite the bit of action from ship chases and battles, to fights with actual dinosaurs.

This book had some nice progression for the main plot line of finding Jelena, although each time it feels like they’re getting closer, another twist hits. Then there is some more about the relic they found in the previous book and some side plot lines regarding the characters. It was quite the interesting read, although not my favorite of the series so far, but I am not quite sure why I enjoyed this one less than the previous book.

After book 4 I was eager to see Alisa and Leonidas romance develop a bit more, but sadly there actually wasn’t as much of them together as I had hoped. I do like how they are closer now than in previous books, but more obstacles are in their path and after an unfortunate accident there is another gap between them. I really feel for Leonidas and how he struggles, but I wish he would let Alisa help him instead of trying to keep some distance.

The group of characters in this series is quite interesting to read about. There is an unique opportunity for Beck in this book. I have to say after book 4 and what Abelardus did there I have trouble liking him and I am not sure whether Alisa can stand him and the plot twists all seem made so he has reason to stay there, but he feels like a creep with how he listen to her thoughts and makes romantic offers. Which is a shame as having a starseer perspective is quite interesting. There are also some interesting Mica and Yumi scenes in this one. I still wonder if there will be a romance developing among the side characters and if yes among whom as there are several options.

To summarize: this continues to be a solid series. This book was another great read. I like how there’s plenty of action and trouble, but with that everything will be alright vibe. This book had some fun ship chase and battle scenes as well as dinosaurs. The romance plot line doesn’t further as much as I would’ve liked due to some accident which puts a new gap between them. The main plot line furthers a bit and several of the side plot lines as well. There are some interesting scenes with some of the side characters, but Abelardus still feels a bit like a creep to me after what he did to Alisa in the previous book. I am looking forward to see where things go next.