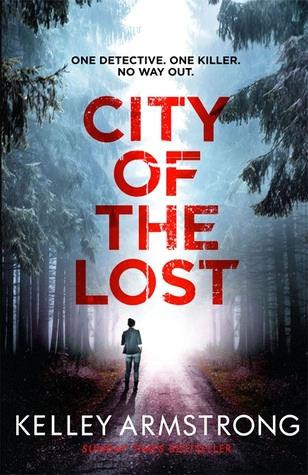 City of the Lost (Casey Duncan #1)
by Kelley Armstrong

Blurb;
Welcome to Rockton: a secret town cut off from the rest of the world. If you need a place to hide, this is the perfect place to start again. There’s just one catch. You can’t leave. Even if there’s a killer on the loose.

Detective Casey Duncan has a dark past, and it’s about to catch up with her. When her best friend Diana is attacked by an abusive ex, the two women realise they have to disappear, fast. Diana’s heard of a hidden town that’s so remote it’s almost impossible to reach. A town that desperately needs a new detective.

Casey has barely arrived in Rockton when a body is discovered. A man’s been murdered and there’s no time to waste. Casey’s job won’t be easy: everyone in town has a secret. Meanwhile her boss, Sheriff Eric Dalton, is a brooding, troubled man who’s hard to read and even harder to please.

With no chance of help from the outside world, Casey must rely on her wits and experience to solve the case. But she’s running out of time. Rockton’s killer is on the hunt, and this deep in the wilderness, no one is safe.

Gripping, fast-paced and atmospheric, City of the Lost is the brilliant new thriller from international bestselling author Kelley Armstrong.

My Review:
A new book/ series by Kelley Armstrong is always a good thing in my opinion as she’s one of my favourite authors. And City of the Lost sounded especially good, I liked the sound of the concept and couldn’t wait to read it. Nevertheless I tried being patient and instead of buying the 6 e-books I waited till the paperback was released and pre-ordered that one. As soon as it arrived I knew I wouldn’t be able to resist reading it for long and I didn’t.

City of the Lost is the first book in Kelley Armstrong her Casey Duncan series, it also works as a standalone, but I am really happy it will be a series as I just want more. I loved City of the Lost and I had a hard time putting it down to go to sleep every night. I’ll finish this chapter turned into reading three more chapters and just one more chapters lead to me reading a few chapters more. When that happens I know I am reading a good book.

City of the Lost normally would be out of my comfort zone, if there’s one genre I don’t read it’s thrillers. But I always make an exception when one of my favourite authors writes a genre I normally wouldn’t read. And I am glad I read City of the Lost. Yes it was creepy, mysterious and even had some gory scenes, but somehow I don’t mind them as much and am being able to handle it when Kelley Armstrong writes it. I love her writing style and it’s like the comfortable feeling her writing gives me makes the gruesome scenes easier to handle. Although yeah there are a few scenes here that were definitely pushing the border for me. I can’t imagine why someone would kill others in such a gruesome manner and even at the end, that part doesn’t get fully explained, why they were killed in such a way.

The start of the story is a bit slow, but I do think it’s essential and it wasn’t boring for a moment. We get introduced to the main character Casey and her best friend Diana. We get a feel of what their loves are and then things change and go wrong and we understand their decision to go to the city of the lost. I thought the process of how they got to the city and the application process was interesting to see. The concept of the city of the lost is a bit improbable, but I do think the author make it sounds possible and I liked how there was enough explanation to get a feel for the town and how things worked there.

The story is really well written, I loved getting to know the characters and the secret city. Rockton is creepy and mysterious, but it also sounds like such a beautiful place to live there in the wilderness and being able to visit such a place through this book was great. I was bale to visualize the town and the forest pretty well. There are some great plot twists in this book and the mystery kept me guessing. Everyone has a secret and it was hard to know who Casey could trust. Then who was the murderer took me completely by surprise. My only complaint is that I would’ve liked for a bit more, a bit more explanation of why the murderer did this and why they used this method of killing the victims. But overall it was a solid story and I really enjoyed it.

From the set-up of this book I was wondering if I would like the characters. I mean they all have a reason to be running of something, they all have a secret. But I was pleasantly surprised when it came to the characters, yes some of them have done bad things, made bad decisions, have a past they regret, but they were still decent people and most of them where likeable too. I liked the shades of grey, not everyone is good or bad here, but they all are varying degrees of grey. The main character did something bad in her past and she has to live with that and I think Rockton is really good for her. I liked seeing her come out of her shell a bit and trying to fit in the town.

Then there is the romance, yes it’s a subplot, it doesn’t take over the story and is nicely interwoven in the story, but it’s also one of my favourite things about the book. I love how Kelley Armstrong writes her romances. I really felt the connection between Casey and Dalton. They are just so perfect for each other. They are both a bit broken, a bit weird, different, but together they are perfect. I loved their banter, those scenes where they slowly get to know each other and then it slowly turns into more and gah the wait is agonizing, but also so perfect. Armstrong knows how to write a good slow building romance, I really felt the connection between these two and having them get to know each other first and become friends before they can become more was awesome and I liked every scene involving them and their relationship. the romance was pretty much perfect and I loved that aspect.

To summarize: City of the Lost is an exciting start of a new series by Kelley Armstrong. I normally don’t read thrillers, but gladly make an exception when Kelley Armstrong writes them and I am glad I did. There are some gruesome scenes, but they didn’t impact me as much due to the awesome writing style. The beginning was a bit slow, but soon I was really into the story and had a hard time putting the book down, I just wanted to keep reading. I loved seeing the story and mystery involve. See the relationships between the characters evolve. There were some awesome plot twists, especially towards the end and the mystery kept me guessing and who the murderer was took me by surprise. Yes it was awesome. Then there are the characters, who aren’t good or evil, but something in between. I liked how that made the characters complicated and everyone had a secret, some did something bad, but they are still good people. And the romance was pretty much perfect, slow building, with lots of banter and them connecting before building up towards more. Gah there are so many great scenes between these two and I wanted them together so badly, but it’s also so worth the wait. All in all this is an amazing start of a new series and I would recommend it to everyone who loves a good mystery, thriller, a book with characters who aren’t good or evil, a perfect romance or a compelling story set in an isolated town in the wilderness.

Which authors their books will you read even if it’s a genre you normally stay away from?

24 responses to “Review: City of the Lost by Kelley Armstrong”