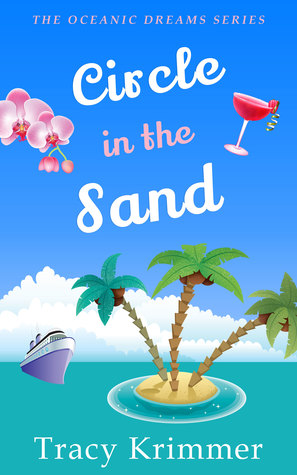 Circle in the Sand (Oceanic Dreams #3)
by Tracy Krimmer

Blurb:
Follow the rules. Be reliable. Don’t wear your heart on your sleeve.

Living by these words didn’t put librarian Isla Hunter any closer to the life she imagined at thirty. With her birthday in only a few days, she can’t wait to sail away on a week in the sun with her friends Asher and Charlotte. It may be just what she needs.

When an attractive woman takes a liking to Asher, Isla’s heart feels threatened in an unfamiliar way. She’s used to Asher flipping through women like a playbook without a second thought, but this time it’s different. As she tries to sort out her emotions, she struggles with Asher’s connection with this woman. Is it time for Isla to finally break the rules or will that only lead her in hot water?

Circle in the Sand was a cute read and I had fun reading it. Isla and her best friends go on a cruise to celebrate Isla’s birthday. When her best fired Charlotte has to cancel, it’s just Isla and her friend Asher on the cruise. They aren’t there for hook ups, but then Asher dares Isla to take a chance and talk with a guy and he himself meets a women too. And that makes Isla realize maybe she sees Asher as more than a friend.

This was a cute and short read. I liked the setting on a cruise and getting a bit of a feel for the ship and the activities. It easily pulled me into the story and I had fun reading it. Isla was a fun character to follow around, although she tended to worry a bit too much times. I liked the friends to lovers type of romance. The author has a pleasant writing style and it’s easy to get settled into the story and follow it along.

I liked Isla and Asher together and it was clear they had mutual attraction and knew each other well form their years of friends. There are some great scenes with them together that shows them being friends and I liked when later on Asher did something sweet for her, but the shine of the scene was stolen a bit by something else that happened. I just wanted to see them together and close a bit more.

There were a few things that didn’t quite work for me, like how much of the focus was on the other women with Asher and Isla’s jealously over that. I wanted more of Asher and Isla together and to see why they were so good together. It also lacked some more fun moments later in the book and I was a bit sad about how Isla’s birthday went. I also thought it a bit weird how Asher not spend more time with Isla alone on her birthday. And how Isla jumped to conclusions at times and almost didn’t believe Asher when he told her it wasn’t true.

While this is part of a series it easily can be read as a standalone. I think all of the stories take place aboard the same cruise ship, so they share a setting. There were some parts like the ferret that I think will be part of most of the stories in this series. And it makes me curious about the other books in the series.

To summarize: I liked this short cute read. The setting on the cruise ship was interesting and well done. I liked how Isla and Asher had been friends for a long time and it was clear they knew each other well and cared for one another. There were some fun scenes of them together. It didn’t really care for how part of their developing feelings was brought out by Isla being jealous of Asher being close to another women. I also would’ve liked a few more scenes of them together as I liked seeing how they acted together and wanted more of that. While part of a series this can easily be read as a standalone. I am curious about the rest of the series and which parts will overlap between the stories. I liked how things got wrapped up at the end.

4 responses to “Review: Circle in the Sand by Tracy Krimmer”