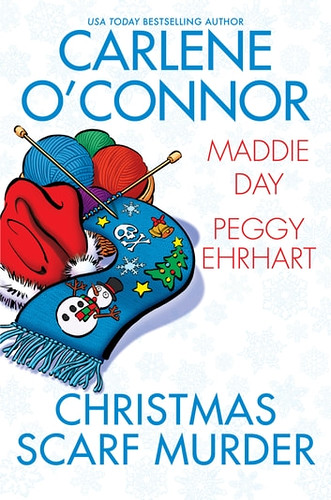 SCARFED DOWN by MADDIE DAY
It’s beginning to taste a lot like Christmas at Pans ‘N Pancakes, as twelve days of menu specials dazzle hungry locals. But the festivities go cold the instant a diner dies while knitting a brilliant green scarf. With Aunt Adele tied into a murder investigation, it’s all on Robbie Jordan to find out who’s really been naughty or nice in South Lick, Indiana.

DEATH BY CHRISTMAS SCARF by PEGGY EHRHART
Suspects pile up faster than New Jersey snow when frosty-tempered Carys Walnutt is found strangled by a handmade scarf auctioned at Arborville’s tree-lighting ceremony. Between a winning bidder hiding behind the alias “S. Claws” and a victim who deserved coal in her stocking, can Pamela Paterson and the crafty Knit and Nibble ladies freeze a killer’s merry murder plot?

Christmas Scarf Murder by Carlene O’Connor
I’ve read one other Christmas themed novella by this author and her series is on my to-read list. Christmas Scarf Murder had a great mystery as well as plenty of Christmas cheer. This one was easy to read even without knowing the characters and I enjoyed following Siobhán and her husband who both for for the police as they solve the mystery. There is a Christmas tractor parade involved, stolen items, a local nursery home and four young character who volunteer and help there.

The mystery was a good one that kept me guessing. And it was great to see how to progressed and they found new clues. I was impressed with the way all the clues tied neatly together toward the end to reveal the culprit, but at the same time during the mystery I wasn’t sure who was the killer. I liked how the focus was on the mystery, but we got plenty of Christmas cheer as well with mentions of the parade and a Christmas market. The ending wrapped everything up nicely and it made for a satisfying Christmas cozy mystery read.

Scarfed Down by Maddie Day
I really like this series by Maddie Day and I was excited to get another story, this time set around Christmas time. There is a twisted mystery and I liked that the scarf killed the victim in a different way than in the first story. I liked how Robbie got involved and helped solve the mystery. My favorite part of this story as usual was reading about Robbie’s daily life and the way she runs her restaurant. I liked reading about the 12 days of Christmas specials they were doing and how the came up with ideas for food to fit each day. There is enough Christmas charm as well as a satisfying conclusion to the mystery.

Death by Christmas Day Scarf by Peggy Ehrhart
This one missed the mark for me a bit. I struggled a bit with the stories introduction with lots of characters in a scene and figured this one is part of a series. Once I was sure who the main character was it went a bit better, but the writing style of this one didn’t really work for me. I also had some trouble getting a good feel for the main character and felt she kinda faded into the background next to her expressive best friend who often lead the case and hunt for suspects. The mystery was interesting though, although I thought the way the main character solved it was a weird. I liked the Christmas charm and we get to see plenty of the festivities and how the character celebrate.

To summarize: This was a great Christmas themed cozy mystery collection with three cozy mystery stories. I liked how each of the stories can easily be read as a standalone, while they’re clearly part of a series. Each story has plenty of Christmas charm as well as a murder mystery that involves a Christmas scarf and I liked how these two themes were present in all the stories. I personally enjoyed the first two stories the most, I am already a fan of Maddie Day’s series and it was fun to revisit that series with a Christmas novella. I definitely plan to check out Charlene O’Connor’ series as I enjoyed that mystery. The third story didn’t work as well for me, but I liked the Christmas charm of it. I would definitely recommend this to fans of the genre!