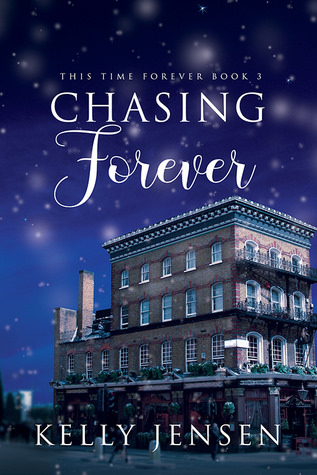 Blurb:
Old wounds, new directions, and a forever worth chasing.

Malcolm Montgomery was a history teacher and track coach until an accident left him with two broken legs. He’ll recover, but life has knocked his feet out twice now. He’s not sure if he’s ready to try again, especially when it comes to love—and slick guys like Brian Kenway. Still, he needs help mentoring the school’s LGBTQ society, so he asks Brian to take some responsibility.

Brian has been hiding behind his reputation as a liar and a cheat for so long that he actually believes he’s that guy—until his nephew, Josh, turns up on his couch, tossed out for being gay. Brian has never considered being a father, but he knows all about being rejected by loved ones. Now Brian wants to be more: a partner for Mal and a role model for Josh.

But when Mal’s recovery is set back and the sad truth of Brian’s past is revealed, the forever they’ve been chasing seems even further from their grasps. It’ll take a rescue effort to revive their sense of worth and make Brian, Mal, and Josh into a family of their own.

I was so curious about this story. As one of the main character Brian is the cheating ex of Simon, who was one of the main characters in book one. And I wanted to know his story and see if Kelly Jensen could make him likable now that we got his side of the story. And I am happy to say she totally did. I really enjoyed Brian and Mal’s story and had a great time reading this book.

Chasing Forever follows Mal and Brian. Brian sees himself as a cheat and an asshole and while it’s not completely wrong, it’s also not the whole story. I really enjoyed getting to know Brian. To see the dark haunted looks when his cheerful and put together shield faded for a bit. And find out what put that haunted look there. To see his struggles and also his vulnerable side.

I think Brian’s backstory is probably the saddest of all the characters in this series. I felt so bad for what he had to go through and it does explain a lot about his character. I don’t think it’s an excuse for cheating on Simon, but I found myself able to understand his actions a lot better and it’s clear they never were meant for each other. And that Simon was also partly to blame for how their relationship didn’t work.

Mal was a character we hadn’t met before, but he was so easy to like. He is the solid and quiet professor type. He is awkward and doesn’t think someone like Brian could go for him, but he does. I loved how Brian chased Mal. And how Mal once he knows how he feels he sticks with Brian and is there for him. I also liked seeing him as a professor, he seemed like such a good teacher with how he was fair, but also set clear boundaries.

Mal has been in a major accident before the start of the book and is struggling to regain power in his legs after breaking them both. And it was sad how he hurt, but it also showed his character in the way he struggled and dealt with it. He doesn’t let his injury stop him from enjoying life, but we also see his struggles and vulnerable side with how the accident hurt him.

I really liked their romance, from the teasing instant connection these two had, to how it slowly grew into more. How Brian was so confident and Mal lacked that a bit, but that worked. But once they forge that connection it’s clear they would do a lot for the other. I liked how these two had an instant attraction, but it still took a bit of time before they got together. And once they do they still have their challenges to overcome. I also liked how their main conflict point was more halfway through the book than toward the end. And I loved how strong and solid that made the end of their story. I didn’t have a doubt that these two belonged together.

I also liked Josh, he’s Brian’s cousin who lands on his doorstep one day as his mom kicked him out for being gay. I enjoyed seeing how Brian and Josh forged a bond and also how Brian had no clue how to be a parent, but I liked how open and honest he was about that and in the process he actually turned into a great guardian for Josh. Vanessa also was an interesting character and she was such a great friend to Brian. And Donny was the best brother Mal could have with how he was always there for him.

Simon and Charlie and Frank and Tom all make a bit of an appearance in this book. Which was great. Simon’s appearance was important for the story and I also liked how Brian and Simon finally resolved any lingering conflict/ uneasiness between them and cleared the air. The appearance from Frank and Tom was less long or important, but it was a fun cameo for those who have read the previous books.

Except for the romance storyline, there is the storyline about Josh and then there is some attention for a school club that Mal runs and where Brian helps. And Brian tries to save a building. I liked seeing how everything progressed and the epilogue was just awesome.

To summarize: I really enjoyed this romantic story. Mal and Brian make for such a good couple. And I enjoyed getting Brian’s story and seeing his side of the story and why things didn’t work out with Simon. I actually ended up really liking Brian and I think the author did a great job making him likable even after the image we already had of him from the first two books. And Mal was the perfect partner for Brian, with his quiet and steady presence. And the way he didn’t give up and his awkwardness. They were great together. I also liked Josh’s storyline and seeing how Brian handled it all. There is a short cameo appearance of all four main characters from the previous books, which was fun too. All in all this was a great romance book and I really enjoyed it.