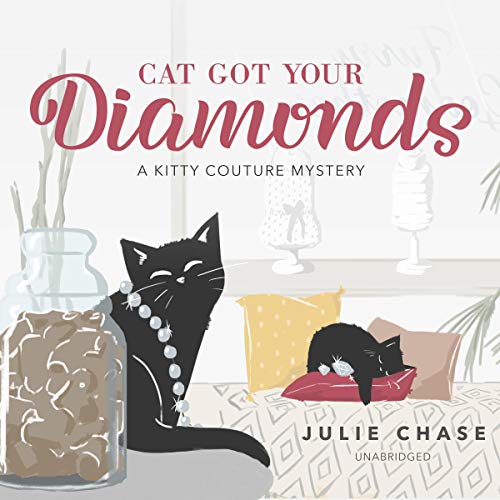 Blurb:
Grandeur and opulence are everything in the famed New Orleans Garden District where pets are family and no bling is too big. Opening Furry Godmother, pet boutique and organic treat bakery, is Lacy Marie Crocker’s dream come true-until the glitter gun used to make her Shih Tzu tutus becomes a murder weapon-and Lacy becomes public enemy number one.

Now Detective Jack Oliver is hounding Lacy, and her Furry Godmother investor wants out before his name is tarnished by association. To make matters worse, a string of jewel heists with suspicious ties to the murder case has New Orleans residents on edge. To save her dream, Lacy must take a stand, put her keen eyes to work, and unravel what really happened at her shop that night. But can Lacy sniff out the killer cat burglar in time to get her tail-raising designs on the catwalk?

Witty and whimsical, Cat Got Your Diamonds, the first in a new cozy series by Julie Chase, will be the cat’s meow for fans of Rita Mae Brown and Miranda James.

I received a free copy of this book from the publisher through Netgalley. Instead of reading the ebook I ended up listening to the audiobook version that I got through an audiobook subscription service. I am voluntarily reviewing it.

Cat Got Your Diamonds has a lovely set up with a main characters who loves pets and has her own pet boutique shop in New Orleans. When someone gets killed outside of her shop after she hit him with a glitter gun she becomes the main suspect and to keep her funding for her store she has to find the real murderer.

Cat Got Your Diamonds was a fun listen, but there was just something to prevent me from getting fully pulled in the story. The characters were nice enough and the mystery was interesting enough, but that’s were it stopped, it never got further than that. So it just ended up being an okay read, I enjoyed listening to it, but it lacked something to fully pull me in.

The mystery start off pretty interesting with the weird murder behind her store, shortly after she hit the guy with her glitter gun as he broke into her store. Ofcourse she ends up being the main suspects and on odds with the lead detective, which is something I have read about so often I didn’t really care for it. And then Lacy kept saying he was the enemy. It did got better as things progressed, but I didn’t like how at odds they were. Lacy kept trying to be involved and the detective kept trying to keep her out of it. She never acknowledged he had a point and he never acknowledged she found some good leads. The police did seem capable and actually solved the murder, so bonus points for that.

The mystery did feel a bit slow at first, with very few leads and for a while it didn’t seem to go anywhere. Once a few leads and pieces of information start popping up the pace picked up, but I felt like we were missing part of the story about the murder victim for a long time, which was true. I wasn’t surprised by who the murderer was and the reveal felt a bit anticlimactic, but there was a twist at the end which was very well done and quite unique. I hand’t seen that twist coming.

Lacy was an interesting enough character. I liked how she had this passion for her pet boutique shop and was determined to solve the mystery, while also having a healthy dose of fear at times. It felt realistic. It did bother me how she was hung up on solving her money problem herself, while her parents already offered to help her with the money if necessary. Now she kept worrying about losing her business, while she already had a solution.

The romance was off to a weird start with the detective who Lacy sees at the enemy obviously being a potential love interest. It almost felt over the top how she kept referring to him as the enemy at first. They also seemed to get annoyed with each other and instead of talking they have these weird sort of arguments and childish behavior that didn’t help the mystery along. Toward the end it slowly grew into something more and I felt myself become more curious about how these two would get together. Then there is Chase the second love interest, who I didn’t really care for at first, although he did seem a charming guy eventually and he did some nice things for Lacy and seemed to genuinely care about her. It just seemed clear her connection with the detective was stronger.

The setting in New Orleans was fun and I felt the author did enough to make you feel like you were really there. There are a few outings and a certain vibe in which the setting shone through. I also think this is one of the first non-paranormal reads I read set in New Orleans, which was interesting as it shows a different side of the city.

For a book with the pet theme it did feel like the pets weren’t that important. For a long while the main character doesn’t have a pet herself. Most of the other pets she encounters lacked personality. Voodoo was my favorite as at least the cat had some interesting backstory, even tough the cat only made a few appearances. I’ve read another cozie series heavy on the pets, so that made it easy to notice how here they don’t play as big of a role. I did like the theme of the pet boutique shop and how she made fashion and food for pets. It was interesting to read about and there were some fun scenes with her work involved and Lacy clearly loved her work.

The narration was done well and was pleasant to listen to. I think I would’ve enjoyed it less if I had picked up the ebook. She handled the different voices well, the character were easy to keep separate. All in all it made for a pleasant listening experience and I wouldn’t hesitate to listen to this narrator again.

To summarize: a fun cozie about a pet boutique shop. Entertaining, but lacked something to fully pull me in. The set-up for the mystery was interesting, but after the murder it takes a while to really get somewhere. There are very few clues and there are some big pieces you’re missing till the end. I wasn’t surprised at who the murderer was and the reveal was a bit anti climactic, but there is a great twist at the end that I didn’t see coming, it was well done and unique. I liked Lacy well enough with her love for pets and her passion for her job. I didn’t really care for the hostility between the detective and Lacy, but toward the end of the book I could see the beginning of a romance there. I liked the New Orleans setting. I did think the pets had a bit of a low role and theme/ focus was more on the pet clothes. The narrator did a good job with this one and the book was pleasant to listen to.

4 responses to “Review: Cat Got Your Diamonds by Julie Chase – Audiobook”