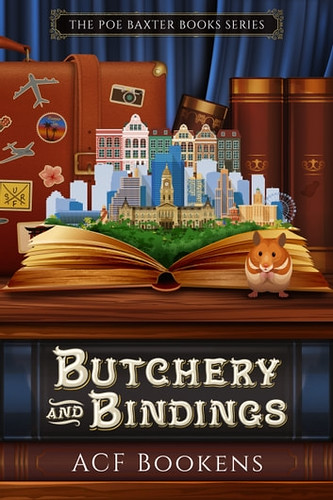 Blurb:
It’s not every day you get to sit on pristine blue water holding a beautiful, first edition Nadine Gordimer novel, and wondering if you’ll survive the day.

Poe Baxter has always wanted to go to Capetown, and when she hears that a rare book by a famous South African novelist has come on the market, she takes the opportunity to fly to the city. But as soon as she and her best friend Beattie begin researching the whereabouts of this supposed literary treasure, they come upon another mystery that takes their attention and puts them in peril.

What is a rare book worth? A human life or two?

Butchery and Bindings is the third book in the Poe Baxter series where she and her best friend travel the world and solve book related mysteries. This series has taken a turn away from the more cozy mystery genre and more into spy mystery with the last book, that change took me off guard, but I was hoping this book would be better now that I know what to expect.

I am still a bit on the fence about this series. On the one hand I really like the author’s writing, the pacing is well done and I like the mysteries. On the other hand I don’t full care about the more dangerous and tense moments related to the whole spy thing. I still struggled with that in this book and I am still not quite sure what to think of the spy related direction, but I am still enjoying the book enough to want to continue the series.

The mystery was not so much a murder mystery, although that was part of it as well, but more a mystery surrounding some books and various parties who wanted to get their hands on them. I liked seeing it all play out and there were some interesting twists. I had some trouble keeping everything straight at times, there’s the real goal of Poe and friends then there is their spy persona and the goals associated with it. There are multiple other parties involved with their own goals and motivations. And the ARC copy had a few inconsistencies, I am sure that will be fixed in the final version, but it made it a bit more difficult to follow the story when the deadline was suddenly longer, someone’s name changed and a confession suddenly didn’t seem to have taken place. I thought the reveal at the end was interesting and I liked the treasure hunt part toward the end.

Poe is an interesting character. I like seeing how Poe deals with the spy stuff and how she can handle herself well, but also needs some time to decompress or fall apart. I thought it made her feel real. I enjoy following her as gets involved in these mysteries. I had all but forgotten about the hamster pet until he suddenly got mentioned again about 60% into the story. I don’t feel he really adds much and it’s odd how sometimes he’s essential and part of the story and other times he hardly gets mentioned at all for chapters at a time. It’s jarring. There is a bit of upheaval romance wise and while I thought it came a bit out of the blue, I liked how things got resolved with minimal drama. I am curious to see where things go next.

To summarize: This third book was a solid read. It helped that I knew what to expect now with the spy direction the plot has taken, but I am still not fully sure if I like the spy stuff and the danger and tense moments that come along with it. I like the writing style and the way the story progresses. The mystery was interesting and I enjoyed seeing it play out. Although I had some troubles keeping everything straight due to multiple parties involved as well as Poe and friends their real motivates and their spy persona motives. There were a few inconsistencies in my ARC copy that also made things a bit more difficult, but those should be fixed in the final version. I find Poe an interesting character and I enjoy following her. I like how she can handle herself, but also needs time to decompress and fall apart, it makes her feel real. There is an bit of romantic upheaval, but I liked how there wasn’t much drama and I look forward to seeing where things go next.