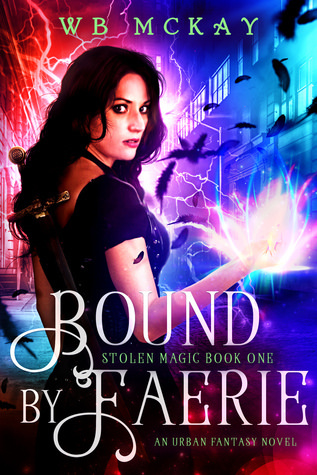 Blurb:
Sophie Morrigan inherited many magical gifts from her death goddess mother. Most of them inflict torture, except the most beautiful. That one kills.

As an agent for the Faerie Affairs Bureau, Sophie loves retrieving dangerous magical objects. The job lets her indulge her covetous nature, and most importantly, it pays the bills. But when a routine job goes south, she finds herself struggling to keep her deadly magic in check while fleeing the wrath of an enraged dragon.

In a desperate search for answers, Sophie stumbles across Owen, a fae nightclub owner who’s as sexy as he is irritating, but just happens to hold the key to her problems.

Sophie wants nothing more than to get her magic under control and return to her normal life, but first she’ll have to face off with all the dangers Faerie can throw at her. Can she fight her way back home? Or will both she and Owen fall prey to a crazed death cult?

Bound by Faerie is a fun action packed, fast paced book filled with magic, faeries and more. The blurb really does a great job giving you the gist of this book, a routine job doesn’t go as smoothly as planned and Sophie, the main character, needs the help of Owen. It was such a fun read and I read through this one pretty quickly. There is no dull moment and it got my attention from the first chapter and I kept enjoying it.

There is a main plot line surrounding the mission that doesn’t go smoothly that’s the main focus on the story, but there are also some side plot lines. The main plot line/ adventure gets wrapped up nicely at the end of the book, but there’s enough open and possibilities for later books in the series. Many of those side plot lines are left unresolved, which only makes me more curious about what we will learn about those in the next book. Mostly these side plot lines have to do with Sophie her magic or the side characters. There was a reveal later in the book that was very interesting and I hope we learn more of what this means in the next book!

Sophie is a feisty and snarky main character who isn’t afraid to speak her mind, even if it gets her trouble sometimes. And she fights with two swords, who each have a name. She can turn into a crow and has some other cool magical abilities. She doesn’t go out of the way of a good fight and lands in plenty of them in this book. I enjoyed reading about Sophie and her adventures, although she really could do with some better social skills, but she seems aware of that herself and her bluntness and snark seems to be part of her personality. And while her job is basically stealing magical artifacts she still has some morals or lines she prefers not to cross unless necessary.

Besides Sophie, there are some fun side characters. Like Owen, whom we learn is more than just a pretty face as he seems to be at first. And her prank loving roommate who is a dryad. Then there is Ava who is a bit mysterious, but I liked the glimpses of her that we got. And Art who we only meet shortly in this book was interesting as well.

The world building seems to be a bit of a mash of supernatural things, all labeled faerie. But it worked. It seems a bit confusing at first and I would’ve liked to get more of a view of what was out there, but the authors do a good job of giving the reader enough of a glimpse into this world and what’s possible. I also liked how Faerie actually seemed foreign and they really described the otherworldliness of the place very well.

I also liked how the authors stayed with the whole faeries can’t lie thing and also how the characters can not straight out lie, but can skirt around the truth. There also was a fun tidbit with how saying thank you leads you to owing a favor to the one you thanked, which seemed interesting. I also wonder if we will see more of the favors Sophie owes in the next books. I also liked the cool powers the characters had like how the main character could turn into a crow. Overall it was fun getting to know this world, I just want to see even more of it!

To summarize: I really enjoyed reading this book! It’s fast paced and filled with action. Sophie gets into a bit of a mess and it was fun to follow her adventures and see how she would get out of it. I liked reading about Sophie, she was a bit too vocal about her opinion at times, but overall I liked her and she was a fun character to read about. The world is a mash of lots of different types of faeries and some interesting types of magic, there were some original touches in the world building which I liked. The world of faerie really seemed otherworldly and there were some fun touches like how saying thank you meant owing a favor. All in all this was a fun and solid start of this series and I am looking forward to the next book in the series!

What’s the most otherworldly world you’ve read about?

10 responses to “Review: Bound by Faerie by W.B. McKay”