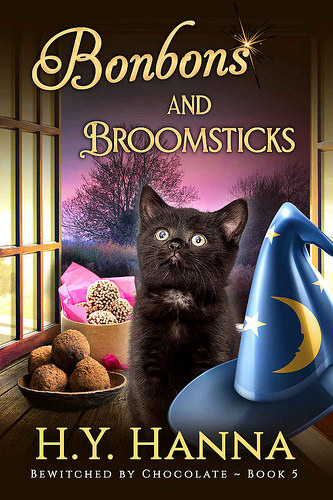 Bonbons and Broomsticks (Bewitched by Chocolate #5)
by H.Y. Hanna

Blurb:
Caitlyn is settling into life as a novice witch in an English village chocolate shop – although she’s finding the hardest magic to master is making caramel sauce without burning it! When two men are murdered, and a mythical black hound is seen haunting the countryside, the village gossips are sure dark witchcraft is to blame. Caitlyn decides to do a little magical sleuthing of her own. Luckily, she has her very own shape-shifter to help (even if he does come in the shape of a toothless old vampire) not to mention her naughty kitten Nibs, and her sassy American cousin!

But her investigation soon leads to unexpected revelations about the mysterious runestone necklace she’s worn since a baby. Can Caitlyn find the killer and unlock the secrets of her past? And will she ever convince the dashing Lord James Fitzroy to accept who she really is?

This was another fun book in this series. I was in the mood for a cozy mystery and had just received my copy of this book, so I decide that was the perfect time to read it. After what happened at the end of book 4 Caitlyn is a bit distracted. Then two new murders shake the small town. The legendary black shuck seems to terrorize the country side and there is a dinner party she attends with a lot of undercurrents. And suddenly Caitlyn’s romantic troubles seem the least of her problems.

I always have so much fun reading this series and this latest installment was a great one. The mystery kept me guessing for a while, but after some well placed hints I managed to figure out both one of the reveals toward the end and the murderer, but I guessed something wrong as well. I like how the author writes the mysteries in such a way that the reader can figure them out, which is fun. I did think a few of the clues Caitlyn uncovered where a bit too much coincidence upon coincidence and Nibs behavior is a few times used as plot device so Caitlyn could stumble upon something. But I liked how it all got resolved in the end.

Another thing I really like about this book is how well it combines the paranormal aspect with the mystery. The paranormal aspect is never too much, but is subtly woven throughout everything and it does play an important role. Although Caitlyn doesn’t use as much magic in this book, there are enough magical/ paranormal happenings. I thought the Black Shuck plot line was quite interesting. And she also made some progress uncovering a bit about her past. The scene at the end was the hag stone was a bit too much with how Nibs’ behavior is used as a plot device so Caitlyn can’t uncover everything yet. But I am curious to figure out what exactly the relevance of her rune stone is.

It’s also great how this series has some plot lines that progress throughout the series, like Caitlyn’s romance with James, the mystery surrounding Caitlyn’s past and rune stone and now there’s a plot line surrounding Blackmort as well, that got started in the previous books, but seems to become another longer running plot line. These overarching plot lines help keep the continuity in this series. And ofcourse the seeing the same familiar characters again each book. I was happy to see Ferdinand the bull got an appearance as well in this book.

After what happened at the end of the previous book, I wondered how the romance would continue in this book. They have quite the huddle to overcome and I wasn’t sure how they would get over it. It did make sense from both their point of views how they acted, which was great and made it feel pretty believable. I was happy to see how things progressed in this book and am curious what this means for the next book.

To summarize: I had a lot of fun reading this one. It’s again full of magic, paranormal and a good mystery. The mystery kept me guessing at first, I managed to predict a reveal and the murderer, but guessed something else wrong. I like how these mysteries are written in such a way that you can figure them out yourself. I liked seeing some continuing story lines progress in this one. And the romance had a great development at the end of this book. The Black Shuck storyline was petty interesting. And it was fun spending time with some familiar characters again. if you like paranormal cozy mysteries I can’t recommend this series enough.

One response to “Review: Bonbons and Broomsticks by H.Y. Hanna”